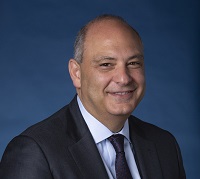 David is president and chief executive officer for the U.S. and Canada at Natixis Investment Managers, where he is responsible for leading the firm’s affiliated investment managers in the region. Before elevating to this role, David served as the president and CEO of U.S. and Canadian distribution at the organization, where he has been since 2008. Prior to joining Natixis, David spent 14 years at Fidelity Investments, where he held numerous roles including president of the Fidelity Charitable Gift Fund, one of the largest public charities in the U.S., and senior vice president of Fidelity’s Eastern Region Investor Centers. David earned his Bachelor of Science in Accounting from Bentley and MBA from Boston College and is a certified public accountant. He is vice chair of the board, which he joined in 2013.