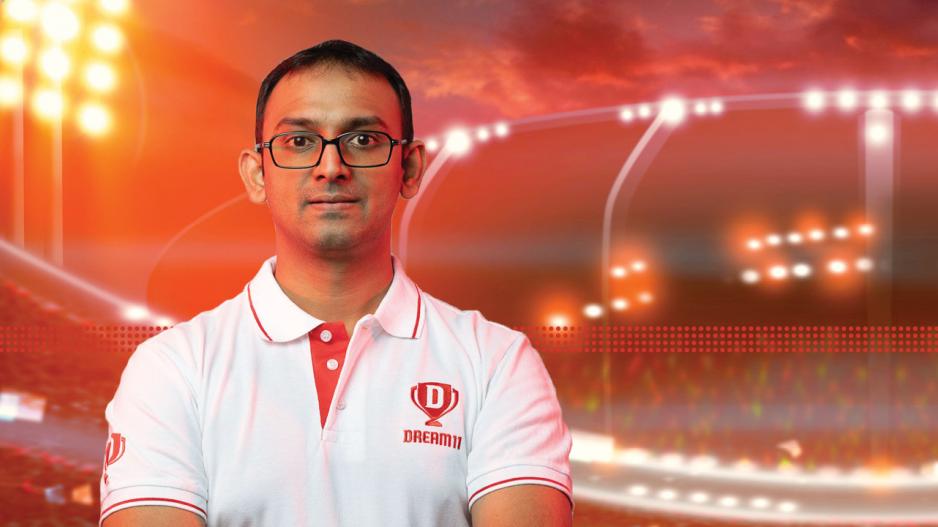 How Bhavit Sheth, MBA ’11 rode a dark horse app into the Unicorn Club

It’s August 1998 and the Manchester United Football Club is headed to its first match of the season.

As their bus winds along the narrow streets of East London to the Upton Park pitch, hundreds of West Ham United loyalists — the opposing team’s die-hard fans — hurl stones and bottles at the passing coach. Just a month earlier, the Manchester team’s midfielder, a young David Beckham, had been red carded and ejected from a World Cup match that ended in a loss and sent England home.

At Upton, Beckham’s every touch of the ball is booed. The ensuing schedule of matches is a heady slog: 10 months of last-gasp kicks and fierce digging in. Defying the odds, Man United steadily climbs in the rankings. Beckham begins to redeem himself.

A miracle is sweeping the season.

In the end, Man United not only wins — they become the first team in English Premier League (EPL) history to clinch the holy treble of English and European football trophies: the FA Cup, Premier League and UEFA Champions League.

Twenty years later, Bhavit Sheth, MBA ’11 and Harsh Jain will make their own miracle. But first, like the boys at Upton Park, they’ll have to start from square one.

Countless dreams are left behind on barroom napkins.

Not Dream11. The idea, birthed in the low light of a bar in 2008, came to the friends just as the India Premier League (IPL) was about to host its inaugural cricket tournament. After years of living and breathing the EPL, stacking their fantasy teams with all the football greats — Henry, Rooney, Ronaldo — Sheth and Jain wanted to use their knowledge and passion for cricket instead, and play along to the IPL with their other heroes — Pathan, Watson, Tanvir. But nothing existed.

“We thought, we should just do this ourselves,” Sheth remembers. At the time, he was in finance, fresh from his undergraduate degree in engineering; Jain was working in real estate with his family. Young in their careers, with extra hours they can’t even conceive of now, they dove into research.

As far as they could tell, there weren’t any competitors. “Remember, this was 2008,” says Sheth. “So mobile phones are fairly new, Facebook hasn’t taken off in India, and other apps aren’t prevalent.”

The average internet download speed at the time was 40KB per second in India, compared with the international average of 5.6MB. As luck would have it, just as Sheth and Jain hatched a plan that required optimal internet access, the Indian government launched a $13 billion initiative to bring broadband to the masses. (Today, India is the second-highest user of the internet in the world, right behind China.)

Cricket was the obvious choice for their app — it’s the game in India. Injected into the nation’s bloodstream by British colonists in the 1700s, the sport is so deep-rooted in Indian culture that the country has a rivalry with Pakistan that makes March Madness look like a backyard cornhole bracket.

Sheth and Jain found that about 70% of U.S. sports fans play fantasy sports. In India, a nation of 1.35 billion people, an estimated 1 billion follow at least one sport — that’s nearly triple the entire population of the United States.

“If we could capture even 10% of that market,” Sheth says, “it had the potential to be really significant.”

That’s how Silicon Valley welcomed COO Sheth and CEO Jain when they pitched Dream11 across the Bay Area in 2014.

“Everyone said no,” Sheth says. “Everyone.”

The reaction wasn’t new. Earlier, when the duo met with gaming industry experts looking for advice, the standard response was: Don’t do it. Don’t even try.

It hurt to hear, he says. “But they were absolutely right. Our original model was a season-long fantasy product, which relied on making revenue through advertisements. Our product was too niche to get that kind of scale at the time.”

Eventually, they burned through the capital they had raised through friends and family. But like the Man United team of their youth, the friends weren’t ready to give up. Instead, they moved sideways, launching Red Digital, a digital communications agency that acts as the go-between for clients and vendors. In just a few years, they had offices across the country and were building websites and games, managing social media and more for titans like Lufthansa and Pepsi. Meanwhile, they took turns going back to school in the States to earn MBAs and the know-how to run their businesses — Jain to Columbia and Sheth to Bentley.

“But we weren’t feeling successful,” he remembers. “The agency wasn’t the product we wanted to pursue. It wasn’t our passion.”

In 2011, with grad degrees in hand and revenue pouring in, they hired a crack team of 10 and pivoted Dream11 to its current model: a daily fantasy sports app with pay-to-play content. The rules: Find an upcoming match, build a fantasy team using your sports knowledge and participate in cash contests.

However, they faced a steep Indian learning curve. While Sheth and Jain had spent years playing fantasy EPL, many of their peers didn’t know what fantasy sports were or meant. Users wondered why their players weren’t actually playing right then and there. Dream11 explained: This isn’t an arcade game. It’s a game of strategy.

As Sheth puts it: “We were making the market from scratch.”

As the app gained traction and they educated the population, Sheth and Jain sold Red Digital and pumped everything they had into Dream11. By the time they reached their fever pitch session in San Francisco, they had 300,000 users. And miraculously, after 150 votes of no confidence: two series A funders.

This is bringing the match into your home. And the stakes are high, like you’re one of the players or the coach, because you’ve invested your knowledge and money into the match.

In April 2019, the company was the first Indian gaming company to enter the “Unicorn Club” — an exclusive circle of private startups valued at $1 billion or more.

According to CBInsights, as of September 2020, there are more than 400 unicorns worldwide; 22 are in India.

But what seems like a sprint was most certainly a marathon. Sheth and Jain focused most of their funding on user acquisition and marketing, slowly building a tech company with a lean team that went from 10 to 300. The company doggedly scaled the fantasy sports learning curve not only on the concept, but on how to download the app.

While the United States is an Apple orchard, India is a galaxy of Androids. And, at Dream11’s launch, Google Play was a supermassive black hole: It banned any games played with cash from the store.

“So we needed users to download the app from our website,” Sheth explains. “But every time they tried, a message popped up saying: This app could destroy your phone because Google hasn’t verified it.”

Fortunately, the average user — 18- to 35-year-old males — defied Google’s ominous warning and downloaded the app. And discovered the competitive spirit and love of the game that’s carried Sheth, Jain and Dream11 all along.

“This is bringing the match into your home. You don’t have to pay for an expensive ticket. And the stakes are high, like you’re one of the players or the coach, because you’ve invested your knowledge and money into the match,” Sheth says. “Everyone loves to talk about what went wrong if we lose a game, or what went right when we win. Everyone has an opinion. Now’s the moment when you can put your money where your mouth is and brag about it.”

While the pandemic slowed Sheth’s projections for the year, being virtual has helped the company stay buoyant — and relevant. This fall, Dream11 won the bid to sponsor the India Premier League tournament. Named the Dream11 IPL, the event is putting the company in front of hundreds of millions of fans, and has created an even bigger opportunity to play fantasy cricket around the months-long tourney.

Their competitors (Sheth estimates there are about 250) most likely choked on the announcement.

“Not only do they have to catch up to us, they’ll have to go through our entire life cycle, which could take years,” he says. Not only that: “We’re planning on seeing an increase to 100 million users by the tournament’s end.”

Partnerships have poured in as Dream11 expands from cricket to hockey, football, basketball and kabbadi, a tag-like contact sport popular in South Asia. The user base has grown from Sheth’s peers to men and women of all ages, united by the thrill that comes with picking the winning hand. And, most important to Sheth, success led to creating the Dream11 Foundation, a nonprofit that provides education, health care, sanitation and, of course, sports opportunities to kids in underserved areas of India. A dad himself, Sheth is proud to help position India’s next generation for success.

“A cricket team is 11 players,” Sheth explains. “So you’re choosing your dream team.”

Playing fantasy sports and creating a company for it matches Sheth’s personality. He’s never been one for the spotlight. Jain, he says, is usually the face of the company. “I’m more in the background, planning and building and managing” — ensuring Dream11 gives back to the fans as much as it gets.

Because, he says, “without the fans, we would just be a good idea that never went anywhere.”