Bentley students are digital natives, but Mark Frydenberg knows that as technology changes, there’s always something new to learn.

“Students today don’t worry about breaking their computer, but they might not know where to start in working through a problem, so they need someone who can guide them,” says Frydenberg, a senior lecturer in Computer Information Systems (CIS). “They’re also looking for a place where there’s freedom to experiment, whether it’s developing an app, exploring virtual reality, or leveraging digital tools to their full potential.” 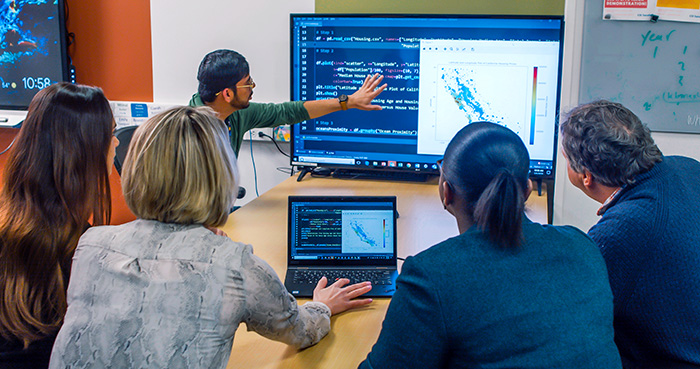 He founded the CIS Sandbox to be that place.

Since 2011, it has served nearly every undergraduate, with peer-led tutoring services and online resources as well as through events such as the Topics in Tech alumni speaker series. Moreover, students gain a space to collaborate on pet projects and test out tech tools.

Some, like Felicia Dodge ’17, discover a passion. She came to Bentley to study marketing, but was drawn to technology after taking courses and visiting the CIS Sandbox.

“They solidified my interest in the tech space,” says Dodge, an audience insights lead at Twitter who gave a Topics in Tech presentation in April.

Miguel, a senior data scientist at Devoted Health, worked as a peer tutor while a student, but says he learned a lot from his Sandbox colleagues. “They were really good at explaining what I needed to know.”

Ming (Maggie) Qian ’18, MSHFID ’21 values the CIS Sandbox for the connections it enables and the extra dimensions it added to her Bentley education. Tutoring other students during her graduate study even helped her hone skills for a new job: user experience researcher with Dell.

“I need to interview people to understand their frustration using systems,” she says. “Working in the Sandbox, I saw firsthand where people struggled and was able to help them move ahead.”

That preparation for the work world is critical, says Chad Wright, MSCIS ’01.

Wright is the first-ever CIO at robotics firm Boston Dynamics and an adjunct instructor in Bentley’s CIS program. He sees the Sandbox as an invaluable resource that shows students the role of technology in business.

“Knowing technology,” he says, “makes you a more prepared professional.”