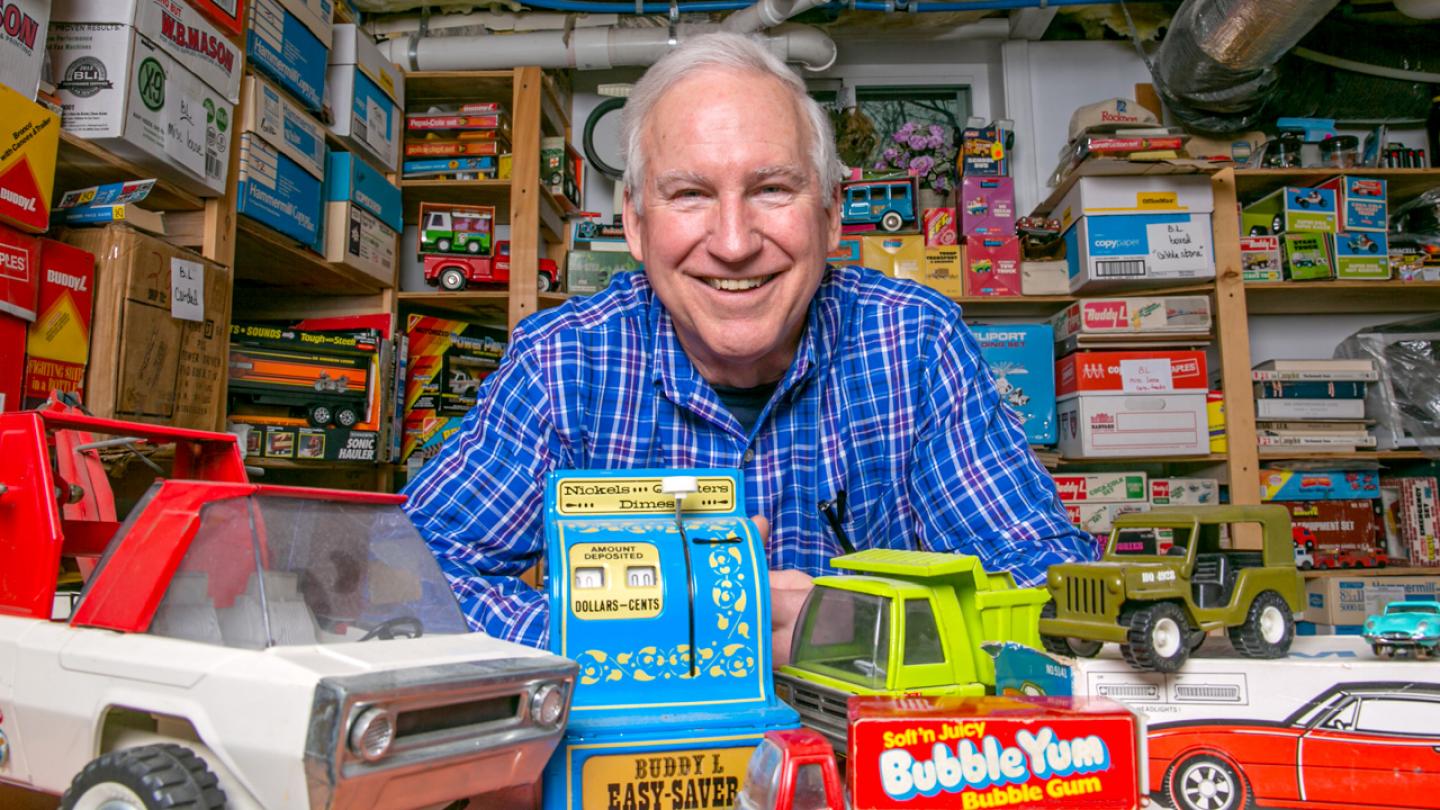 Almost nothing brings Brian Shultz ’80, MBA ’87 more joy than giving new friends — and interviewers — a tour of his basement.

“See this here?” he asks, holding a large toy box. It reads Barney’s Auto Factory and shows a boy from the early ’60s playing with cars — just as Shultz did back in the day. Wheels, screws and engine parts each have their own compartment, alongside a long yellow track. “You put the engine in the body and screw the wheels on one side,” he explains, pointing to each production point. “Add the hood and windshield, then it goes to the end of the line.” He makes a sound effect and whips his finger along the track. “Turns around. Comes back. You put the wheels on the other side. You hit the button and it rolls off the assembly line.

Shultz is like a kid in a candy store, which makes sense, because we’re surrounded by toys. Thousands of them. And the store is his: Boomer Boys Toys, a vintage toy business he runs on eBay.

While most of us can’t even remember what’s stuffed in our attic, Shultz has been meticulously organizing and cataloging his childhood mementos, down to the last die-cast model car, for the past 35 years. “I just love it.”

The hobby began in the mid-1980s, when his parents moved from Pennsylvania to California. Instead of tossing or donating his belongings, he saved them — and then started adding to the pile. 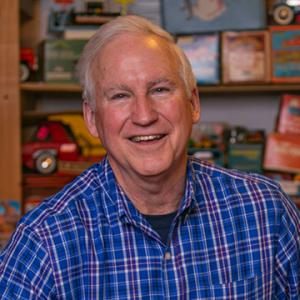 Add the hood and windshield ... put the wheels on the other side. You hit the button and it rolls off the assembly line. How neat is that?

“Toys today are about promoting the movie,” he says. A far cry from those he remembers playing with, which often required assembly and didn’t take batteries. Quality is the name of the game on Shultz’s shelves — like original Parker Brothers and Milton Bradley board games. Remco, Matchbox miniatures, and Buddy L and Ideal Motorific slot cars. He has even acquired a few museum-worthy items, then donated them to historical commissions, like the 1,500 Golden Books he gave to the Strong Museum of Play in Rochester, N.Y.

The bulk of his 8,000-piece trove is anything with four wheels. That theme continues in the garage, where Shultz keeps his classic cars: a ’67 Dodge Coronet 500, a ’78 Chevy El Camino that he scored from the Chick-Fil-A car museum, an ’88 Oldsmobile Cutlass Supreme Classic and a ’67 Chevy Camaro reminiscent of the red one he drove around as a college student.

Those wheels came in handy at Bentley. As a DJ and manager of the band LMN, Shultz hauled instruments and sound equipment to gigs at the 1917 Tavern and Frank’s Place. He worked in the cafeteria, too, staying late many nights to set up an assembly line of full dinner plates for the football team post-practice. The active Sigma Phi Epsilon brother also ran the campus dances.

He also remembers living in a bed and breakfast on Boston Post Road, where the owners made his bed and did his laundry. Despite the small creature comforts, or perhaps because of them, he says, “I worked hard and had a lot of gigs. I had a blast at Bentley.”

That included an accounting internship downtown with a young Professor Chip Wiggins, which led to a job at Robert Finnegan & Lynah. “Little did I know that we were in the midst of the corporate merger mania of the ’80s,” he says. The firm was bought by Simmons, which was also acquired. “Before I knew it, two years out of school, I was working for Gulf and Western.”

Shultz went on to a 24-year career at Harvard, where he ushered the university through Y2K, converting the school’s human resources to PeopleSoft and more. As he puts it: “The beauty of accounting is that it’s the same no matter where you go.”

But he hasn’t slowed down much. The alumnus and his wife, Joyce, have traveled to 30-plus countries on five continents, including missionary trips that brought school supplies to communities in need. He’s building a barn to showcase all his collectibles and cars. He plays guitar in a local band.

When Shultz does pause to look back, it’s with a sense of wonder. “I was really kind of distracted as a youth,” he says of interests that competed with academics: The Doors and Santana, muscle cars and high school sweetheart Joyce.

Bentley was the first block on the board that said, “Go!”

For that start in life and more, Shultz has been a True Blue donor, giving for 35 consecutive years. “There are just causes I need to support,” he says. “And Bentley will always be one of them.”

Return to the homepage