As a kid, Casey White ’14 loved playing restaurant with friends, using rocks for money and cooking up business ideas.

“My mind was always, ‘How do I create something people want, and how do I manage that?’” says White, whose role models were a mother who worked in business operations and a grandfather who started a deli in the 1940s with his siblings. “I knew I wanted to own a restaurant or do something with food.”

That “something” is Jaju Pierogi. The 6-year-old company, which White co-founded with sister Vanessa, makes the Polish dumplings that are still a staple at family dinners. “Jaju” means grandfather in Polish and pays tribute to the inspiration for their recipes.

Why pierogies? The alumna recalls bringing them in from home during her student days.

“My roommates had never seen them before,” says White, who was happy to share. Their enthusiasm suggested a wider market for the comfort food of her youth.

Initially, she and her sister rented space in a deli and swooped in after hours to make pierogies. Customer demand has since pushed the company — twice — to larger quarters; a third move is on the horizon.

The two are co-owners and co-CEOs. They divide responsibilities based on interests and strengths. 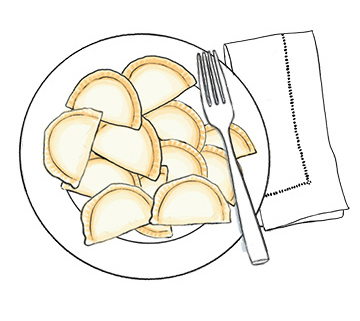 “We each have our own book of business,” says the former Management and Liberal Studies major. She handles finance-related tasks such as accounting and payroll, while Vanessa oversees marketing; both work on sales.

The pierogies are on offer at farmers markets and grocery stores throughout their native Massachusetts and in supermarkets Big Y, Roche Brothers and Hannaford. Their goal is national distribution.

Today, six full-time employees turn out dumplings in combinations ranging from tried-and-true (potato and cheese) to unexpected (jalapeno cheddar). And the sisters are OK with reserving their skills for family dinners.