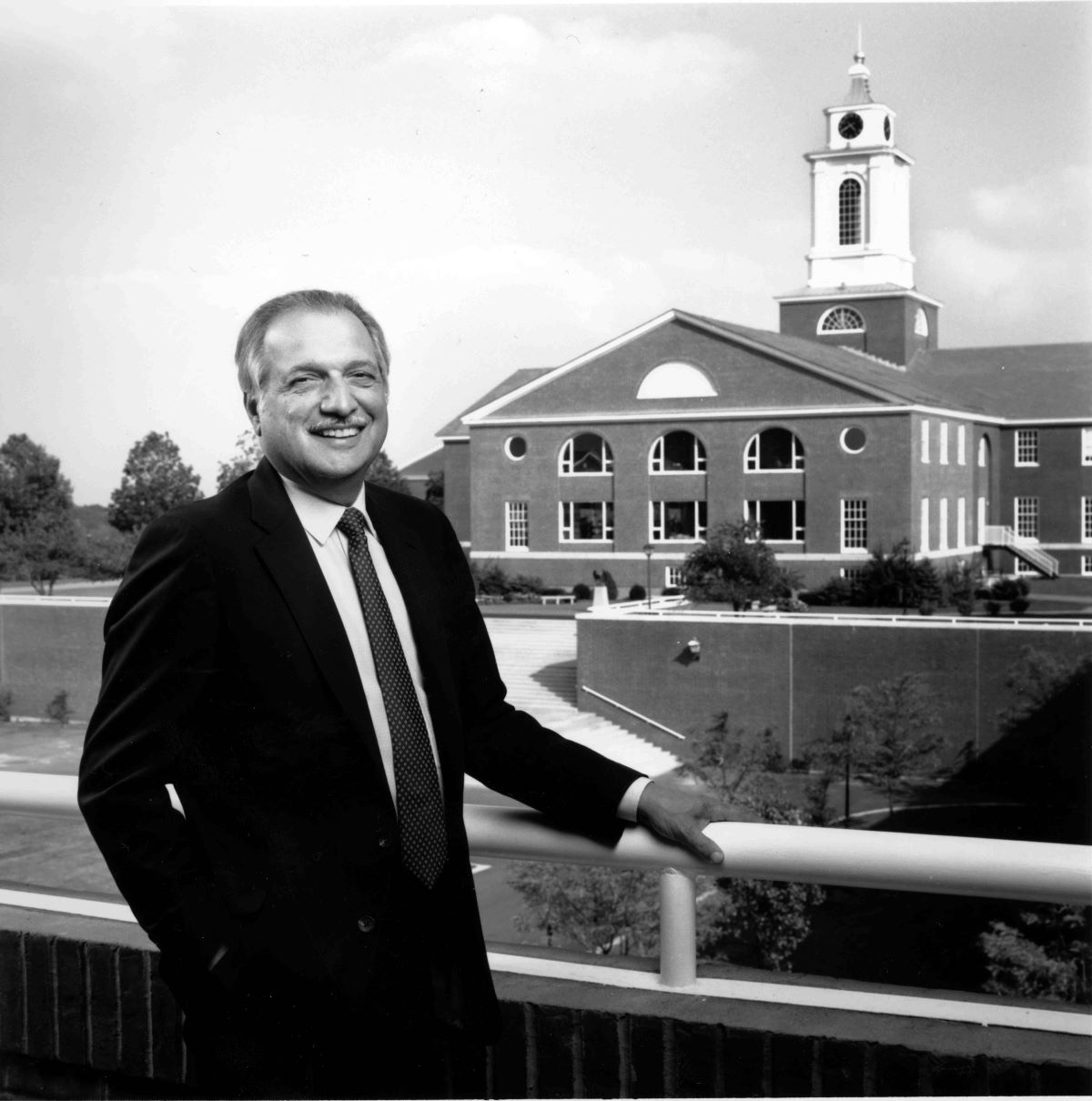 Gregory H. Adamian, who served as president of Bentley College – today Bentley University  – from 1970 to 1991, and then as its first chancellor, died on November 21.  He was 89 years old.

Adamian was a member of the Law Department faculty when he was elected president in 1970.  Under his leadership, Bentley was transformed from a small, regional accounting school to an innovator in business education with a national reputation.  During Adamian’s tenure, Bentley’s development was comprehensive.  Full- and part-time enrollment doubled while the faculty grew in number from 42 to 350. The college’s academic offerings grew significantly in quality and breadth, from a single program in accounting to undergraduate degrees in 11 business and arts and sciences disciplines. In addition, the Graduate School was established in 1974, which today offers a range of MBA, Master of Science degrees and PhDs in two fields.

Also central to Bentley’s growth in those years was its achievement of financial stability. Its endowment jumped from $385,000 in 1970 to $60 million upon Adamian’s retirement.  Just two years prior to the start of Adamian’s presidency, Bentley moved from Boston to Waltham, and its new campus initially included 12 buildings.  Beginning in 1970, 27 buildings, including residence halls and academic, administrative and athletic facilities, were constructed. The Bentley campus became one of the most modern and well-maintained in New England.

Bentley was an innovator in a number of academic areas under Adamian’s leadership. The Center for Business Ethics, among the first such academic centers in the nation, was founded in 1976. In 1985, Bentley became the first college to require laptop computers for all students. And its business offerings were supplemented in the 1980s by programs and majors in English, history and philosophy.  A commitment to excellence in ethics and social responsibility, information technology and the art & sciences remains essential to Bentley’s mission today.

Adamian retired as president in 1991 to become chancellor and president emeritus, in which roles he was an ambassador and fundraiser.  He served on the Board of Trustees until 2002 when he was elected trustee emeritus.  He received honorary degrees in 1991 from Bentley and Boston University.

Adamian was born in Somerville, Massachusetts on September 17, 1926. He graduated from Harvard College in 1947, and later from Boston University Law School. He also held an MPA from the Graduate School of Public Administration at Harvard (today the Kennedy School).  He practiced law in Cambridge and began teaching law and economics part-time at Bentley in 1955, when it was still located on Boylston Street.  He became a full-time faculty member in 1968.

Adamian was a respected spokesman for higher education.  As chairman, vice chairman and treasurer of the Association of Independent Colleges and Universities in Massachusetts (AICUM), he was a strong advocate for increased financial aid.  He was also a member of many corporate and non-profit boards, including Liberty Mutual, the Massachusetts Higher Education Assistance Corporation, West End House and Inroads.

Adamian was a leading member of the Armenian-American community and an articulate spokesman on the Armenian genocide.  A founding director of the National Association for Armenian Studies and Research, he helped establish an endowed chair in Armenian studies at Harvard University.  In 1990, he received the Humanity Award from the organization Facing History and Ourselves for his work as a spokesman for the Armenian-American community.  He was also a recipient of the Ellis Island Medal of Honor in 2007. He served on the boards of the International Armenian General Benevolent Union, St. Nerses Seminary and the Armenian National Science and Education Fund.  In 1998, he received the medal of St. Sahag and St. Mesrob from Karekin I, Catholicos of All Armenians.

Adamian is survived by his wife, Debbie Murdza Adamian of Medford, Massachusetts and Boca Raton, Florida; two sons, Douglas, of  Branchville, South Carolina and Daniel, of Dallas, Texas; and 5 granddaughters.  He was predeceased by his first wife, June, in 1966.