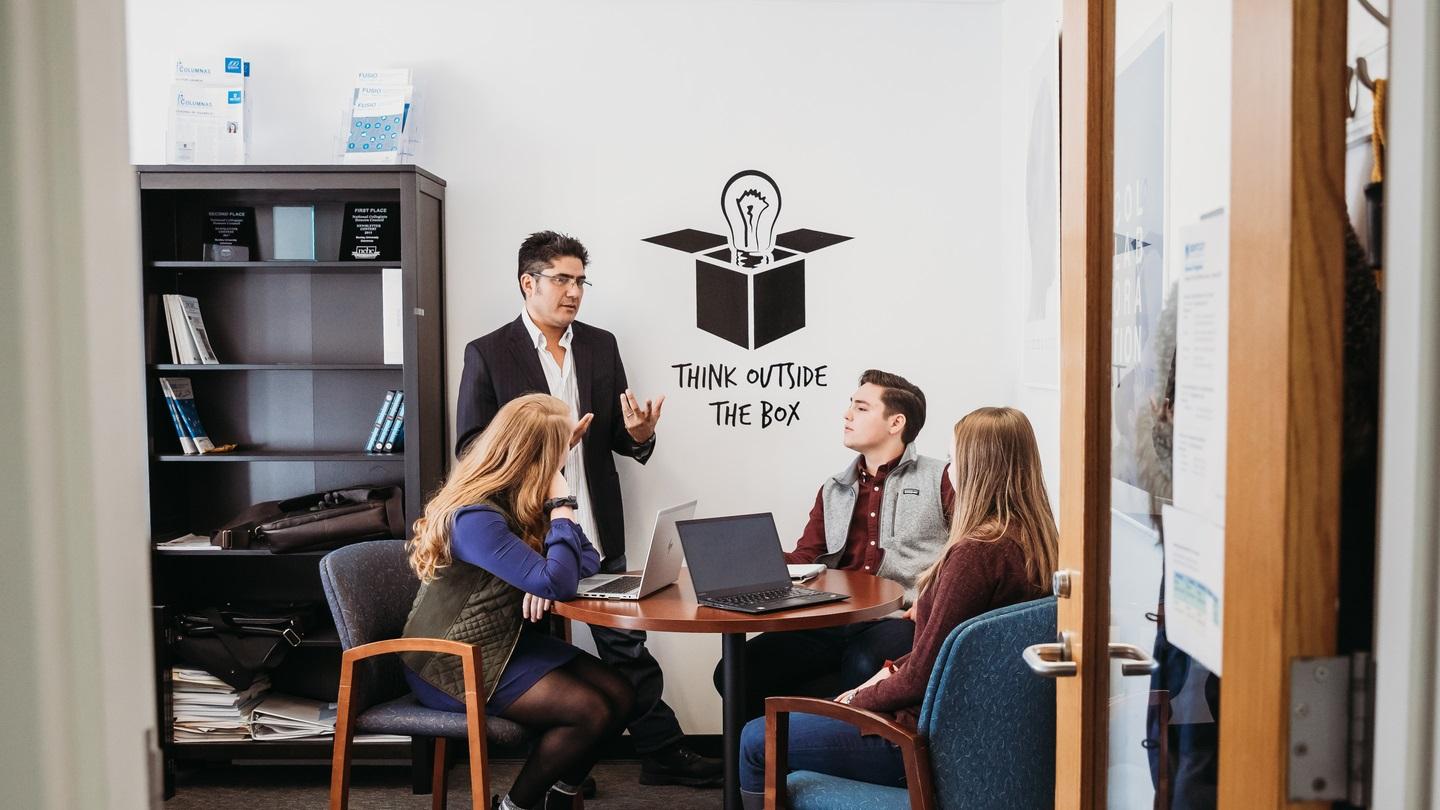 Christian Rubio likes a challenge. It’s one of the reasons he has been working with honors students for much of his teaching career — and why he said “yes” to taking on the role as director of the Honors Program at Bentley, which serves the university’s most academically advanced and intellectually curious students.

“I believe that all students have the ability to work above and beyond, and honors programs provide resources such as research projects for them to do that,” says Rubio, associate professor of Spanish and a member of Bentley’s Honors Faculty Council. “As a professor, it challenges me to continuously develop tools to push their intellectual curiosity and help get to that next level.”

It’s not unlike the broader mission of a college or university, to inspire students through teaching and experiential learning. Rubio says that it was one of his undergraduate professors who first got him thinking about that.

“I had a Spanish professor who was very creative about the way he encouraged us to interpret poetry and literature,” he recalls. “He never turned down a student’s idea because he believed in encouraging people to think on their own. He got me thinking about becoming a professor.”

Rubio was born in Peru and moved to New York City when he was 15 years old. His parents decided to leave behind a deteriorating economy and the violence caused by the Shining Path terrorist group. Later, as part of his doctoral research at Columbia University, he chose to focus on still another part of the world.

“Many of my peers studied their own countries but I decided to study Spain because I enjoyed my undergraduate professors who taught that,” Rubio recalls. “It's that same attitude that I bring to my classroom: I try to challenge students to go beyond their comfort zone and explore other aspects of life.”

I want students to leave the classroom having learned something that they feel has the power to improve their lives.
Professor Christian Rubio

Ciara Mann ’19 says Rubio inspired her to pursue difficult yet rewarding opportunities. Those included taking a two-week trip to Peru with nine other Bentley students to study the country’s history and economy; enrolling in an upper-level Spanish-language business course while she studied in Madrid; and applying for a selective undergraduate fellows seminar in which 15 students analyze and debate issues for a semester alongside four professors.

“The best thing about Professor Rubio is how much he cares for students,” says Mann, a member of the Honors Program who accepted a job after graduation as a risk advisory consultant at RSM. “He has always been willing to invest time in me and challenge me to push myself. It’s been fun to have a professor who morphed into a mentor and now a friend.”

Rubio credits his upbringing in New York City after immigrating from Peru for opening his eyes to diversity. “Living in such a melting pot, I met people from various parts of the world, and it was the same family values and cultural aspects that allowed me to get along with everyone.”

A five-year stint in the U.S. Navy helped Rubio relate to people from various backgrounds and countries. “We always found common ground,” he says. “Whether it was soccer, the sights or music, people were always willing to talk.”

Rubio, who redesigned the Honors Program at the University of Louisiana Monroe and served on the National Collegiate Honors Council, has brought his personal perspectives — pushing beyond comfort zones and embracing differences — to the Bentley Honors Program. So much so that he makes a conscious effort to ensure that Honors students are fully integrated into the Bentley community through involvement with student organizations and campus events.

His overarching goal for all of his Honors students is simple. “I want students to leave the classroom having learned something that they feel has the power to improve their lives and help them grow.”