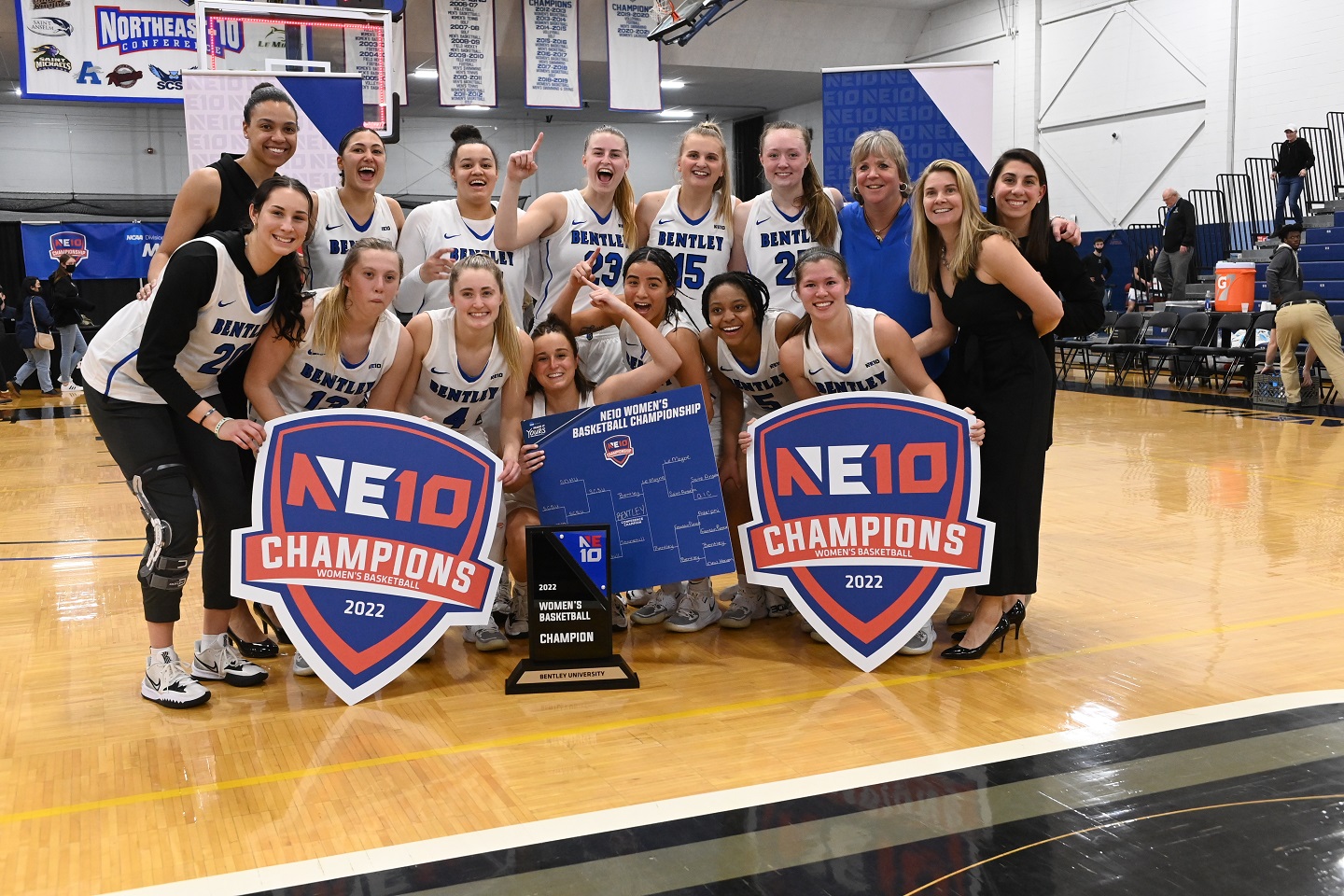 For the first time in the 40-plus year history of the Northeast-10 Conference, one university has won both the women’s and men’s basketball championships in the same season: Bentley University. The Falcons made history on Sunday with the women’s 56-49 win over Stonehill College and the men’s 68-62 win over Franklin Pierce University in a high-energy doubleheader in front of an enthusiastic crowd at the Dana Athletic Center.

Both teams will continue their successful seasons this weekend with games in the first round of the NCAA Division II Championship tournament.

For the women’s team, the Northeast-10 championship was the Falcons’ 21st all-time, the first since 2018 and first under head coach C White, who succeeded Hall of Fame Coach Barbara Stevens. With the win, Bentley, with a record of 19-8, earned the conference’s automatic berth to the NCAA Championships, which will begin on Friday.

Autumn Ceppi, MBA ’23, a first-team All-Northeast-10 selection who averaged 14.8 points, 10.8 rebounds and 2.3 blocks during the conference championship, finished with a game-high 17 points, 13 boards and three blocks on Sunday. She was named Most Outstanding Player for the women’s conference championship. Janessa Gonzalez ’24 and Kari Brekke, MBA ’24 also scored nine points for Bentley. Brekke joined Ceppi on the All-Tournament Team and received the Northeast-10 Elite 24 award as the player at the championship site with the highest cumulative grade point average.

“This team is willing to do whatever it takes to win,” said White. “There are truly no individuals on this roster. Our seniors have led us in a team-first mentality all year long, and that is what guided us to success when the game and in turn our season was on the line.”

The women’s team will face Jefferson University this Friday at Southern New Hampshire University in the first round of the NCAA Division II Championships.

For the men, the win continues an outstanding season for the team, whose record rises to 22-4. The Falcons are ranked first in the NCAA Division II East Region and 16th nationally.

“I have been very proud of this group over the past two years in the way that they have approached their business on and off the court during these unique and difficult times,” said head coach Jay Lawson. “They are as good of a group as we have ever had when it comes to their commitment to the sport, improvement and each other.”

On Sunday, Jordan Mello-Klein, MBA ’23 led the way with 23 points and seven rebounds in the win over Franklin Pierce. Colton Lawrence, MBA ’23 scored 12 points and Amabilino Perez, MSF ’23 had 11 for the Falcons. Mello-Klein was named Most Outstanding Player in the conference championship and was joined on the All-Tournament Team by Mason Webb ’22.

Perez received the Northeast-10 Elite 24 award winner as the player at the championship site with the highest cumulative grade point average.

The men’s team will face Felician University this Saturday at the Dana Center in the first round of the NCAA Division II Championships.