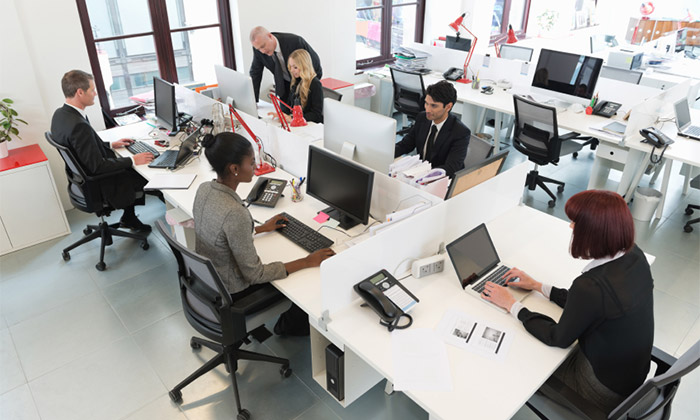 Beginning in the late ’90s with the first startup boom, companies have tried setting themselves apart as cooler, hipper, friendlier and more down-to-earth than their corporate counterparts by implementing more casual, open-air layouts in their offices. Gone were the dreaded cubicle partitions that came with the stereotypically negative notion of being a cog in the wheel or a corporate drone. In these innovative new spaces, head honchos sat directly among the entry-level grunts, fostering an increased sense of possibility and presumably cutting through the hierarchy that long had been blamed for stifling creativity and the free flow of ideas.

But did we get it completely wrong? A Gen-X writer for The New Yorker opines on “The Open-Office Trap,” and The Washington Post argues that workplaces actually need more walls, not fewer, in a piece about how “Google got it wrong” and how the open office trend is destroying the workplace. “The open-office movement is like some gigantic experiment in willful delusion,” Fast Company senior editor Jason Feifer fumed in a 2013 editorial (which was then shared nearly 29,000 times across social media).

About 70 percent of all offices have open-layout floor plans in 2015, according to The New York Times, though numerous studies have shown that employees who work in offices with no or low partitions suffer increased stress from lack of privacy and disrupted concentration — which ultimately decreases worker productivity overall. To wit, the comments section of the same NYT piece yields the gripes and personal experiences of more than 135 workers who blame architects’ design fetishes, corporations’ need for cost savings, and unrealistic (and previously untested) generational preferences for the current problems with open-layout offices, which often cause employees to “work from home in order to get any work done.”

Though Forbes attributes these workplace layout preferences to generational differences, citing millennials as the biggest proponents of open floorplan offices, and NPR reports that millennials are indeed causing many companies to change the nature of their workplaces in order to attract and retain them, millennials find some of the drawbacks of an open office as distracting as older generations do. The difference, according to a 2012 study of Finnish workers, is that millennials are more likely to believe that the trade-offs are worth it.

Some companies are literally bridging this preference gap by creating separate work areas for those who prefer private, high-walled spaces and those who prefer even more egalitarian “free-address” spaces lacking even assigned seating. The BBC reports that many “victims of open offices are pushing back,” leading companies, including Microsoft, to adopt hybrid design plans optimized for creativity, collaboration, and both team and individual productivity.

“Many workers today crave a haven for privacy and concentration,” Pankaj Arora, leader of the Modern IT Innovation Group at Microsoft, told the BBC. “Collaboration is critical, of course, especially at technology companies that thrive on innovation, but too much togetherness can sap productivity and creativity.”