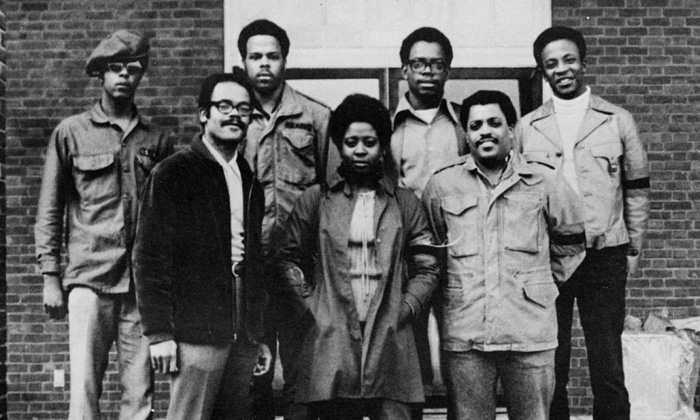 Study and work were the predominant student activities for most of Bentley’s first 40 years. The Boston campus lacked spaces to gather other than smoking lounges.

Moreover, socializing was not a priority, says university historian Cliff Putney: “Students commuted to school, often on public transportation and from some distance. After classes, most headed off to jobs, which they needed to put themselves through Bentley.” The earliest extracurricular options included a handful of fraternities and sororities, beginning with Kappa Pi Alpha in 1922 and Delta Omega in 1940; a student council formed in 1926; and a yearbook called The Benboo, published only in 1932 and 1933.

Boom years for student organizations arrived with Bentley’s rise to collegiate status in 1961. Putney’s research notes that members of the Class of 1964 were the first to elect student officers (including George Fantini, see page 5, and Katherine O’Keefe, page 32); create a student event that endured for many years (a talent show, page 66); and precede their Commencement with special activities (Senior Week, page 54).

Students remain the driving force in establishing and running organizations. There are now more than 100 options ... academics, Greek life, student government, religion and service, social causes and politics, arts and media, culture, and recreation and athletics.

“New organizations reflected students’ interest in business, culture, religion, politics and academics,” Putney says of groups such as AIESEC, the Paideia Club, Newman Club, Young Republicans and Young Democrats, and Systems and Procurement Club. “Bentley’s president at the time, Thomas Morison, saw extracurricular activities as key to earning accreditation by the New England Association of Schools and Colleges as well as in ‘producing graduates of broader education and competence.’ He urged Bentley students to create additional societies, which they did with great enthusiasm.”

Students remain the driving force in establishing and running organizations. There are now more than 100 options, clustered in the general categories of academics, Greek life, student government, religion and service, social causes and politics, arts and media, culture, and recreation and athletics. Students whose interests are not represented can propose a new organization and petition the Association of Bentley Activities (ABA) — also run by students — for official recognition. The ABA also establishes policies for student organizations and hosts a campus-wide activities fair every fall and spring, among other duties.

Each organization determines its own leadership structure, often an executive board with president, vice president, secretary and treasurer. Some add web designers or marketing officers.

Staff members in Student Programming and 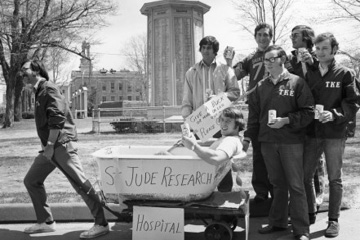 Engagement (SP&E) work closely with these student leaders, for example, by hosting the Winter Leadership Conference. The annual event, made possible through a donation by Kurt Heinrich ’87, gathers members of all executive boards for training and tips on running their respective organizations.

“Students are very passionate about their causes,” says Doreen Floyd, associate dean of student affairs. “They know that, at Bentley, ‘I can have my major but still make a difference in all these other areas I care about.’ Organizations are a great way for students to engage with the campus community and apply their business skills outside the classroom.”

Some of the many organizations that run on student power and creativity:

It takes seven student committees to orchestrate some of the biggest events on campus. These teams — Concerts, Box Office, Comedy, Event of the Month, Game Show, Sports and Recreation, and Traditions — form the CAB. Members collaborate to plan, promote and host events for fellow students throughout the year, typically, five to 10 per month. Examples include Bubble Soccer and Color Runs, along with trips to off-campus sites such as Six Flags.

Signature events for CAB are Super Bingo and an annual concert during Spring Day. The former brings out nearly the entire student population, to compete for prizes such as flat-screen televisions. The concert has featured Ludacris, Kelly Pickler, T-Pain and other well-known musicians.

Diversity, equality and inclusion. These are the tenets of the BUB, established in 1969 by John Hawkins, director of student activities at the time. BUB is one of Bentley’s oldest and largest student organizations. Events such as an annual fashion show, poetry slams and music concerts welcome all members of the campus community, regardless of race.

At the same time, BUB members take an active role in ongoing conversations about racial equality that take place on campus. In particular, student leaders from BUB participate in the new Bentley Brave program, which includes “Real Talk,” a semester-long intergroup dialogue program, as well as other events featuring key players in the racial equality movement in America.

While all Bentley students learn about the stock market in their freshman Accounting and Finance course, those with a passion for finance — more than 200 students, both undergraduate and graduate — get to invest real money as part of BIG.

While all Bentley students learn about the stock market in their freshman Accounting and Finance course, those with a passion for finance — more than 200 students, both undergraduate and graduate — get to invest real money as part of BIG. Members meet weekly on campus during the academic year and virtually during the summer; they work in teams responsible for six industry sectors, performing research and pitching proposed investments to the group. Their record of success includes outperforming market expectations during the financial crisis that started in 2008.

Ranked #8 for Most Active Student Government by the Princeton Review in 2016, the SGA is the voice of Bentley’s student body. Elected by their peers, members provide input on policies that affect campus life — everything from dining hall changes to making the campus smoke-free — and ensure that student concerns are heard by Bentley administrators.

At one time, SGA had oversight responsibility for student organizations, including approving new clubs and maintaining constitutions. This created a potential conflict of interest given that organizations’ needs and concerns differ from those of the individual students SGA members were elected to represent. In the 1990s, the Association of Bentley Activities was formed and assumed oversight of organizations.