Coach Stevens to be Inducted into Hall of Fame this Saturday 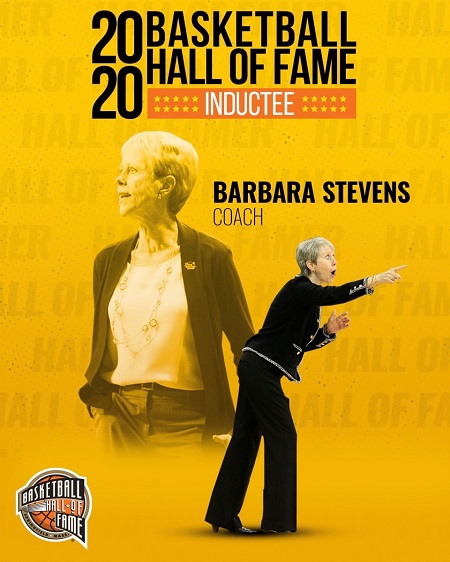 Bentley University women’s basketball coaching legend Barbara Stevens will be inducted into the Naismith Memorial Basketball Hall of Fame this weekend as the hall celebrates its Class of 2020 at the Mohegan Sun Resort in Uncasville, Conn. The enshrinement of Stevens and the other inductees will be televised live on ESPN on Saturday from 5:30 to 8 p.m.

Stevens will be presented for induction into the Hall of Fame by two collegiate women’s basketball coaches who have already been inducted – University of Connecticut Coach Geno Auriemma and former Notre Dame Coach Muffet McGraw.

A five-time Division II National Coach of the Year, Stevens retired in July 2020 after 34 seasons at Bentley and 44 seasons as a college coach. Before Bentley, Stevens coached for seven years at Clark University and three at Massachusetts.

Stevens finished her career with a record of 1058-291, a victory total exceeded only by Hall of Famers Pat Summitt, Tara VanDerveer and Auriemma. She is one of six NCAA women's basketball coaches with at least 1,000 wins. At Bentley, her record was an incredible 901-200.

A dozen of Stevens' Bentley teams won at least 30 games, including the 2013-14 team which capped a 35-0 season with a victory over West Texas A&M to win the national championship.

Stevens was inducted into the Women's Basketball Hall of Fame in 2006, and is also a member of the Bentley, Clark, Bridgewater State and New England Basketball halls of fame.

This weekend's ceremonies will also include an Enshrinement Tip-Off Celebration and Awards Gala. It will be held on Friday and televised (via tape-delay) on ESPN on Saturday from 3:30 to 5:30 p.m., immediately before the enshrinement ceremony airs live from 5:30 to 8 p.m.

A dozen of Coach Stevens' Bentley teams won at least 30 games, including the 2013-14 team which capped a 35-0 season with a victory over West Texas A&M to win the national championship.