Amanda Maringka ’14 discovered her calling in helping others find theirs.

As founder of Indonesian company terARTai, she co-creates art with people who have special needs and turns the work into sellable products. They are able to earn money and take away something perhaps even more important:  a sense of purpose.

The artists Maringka works with in her home country are adults. But they live with conditions, such as autism and cerebral palsy, that make it difficult to become independent and find meaningful pursuits. 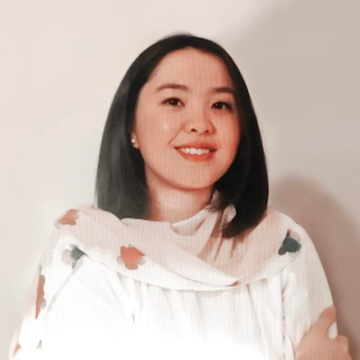 Maringka, 28, can relate to those feelings of aimlessness and uncertainty. When she first walked into Kyriakon School, in early 2019, she was on a sabbatical from global marketing and consulting firm Innate Motion. Five years into the job, she had hit pause to plot her next career move.

A school, where she expected to volunteer with children, was the last place Maringka thought would provide clarity. She stumbled into it when joining a friend to set up an event for World Down Syndrome Day.

“I was always awkward with kids,” Maringka admits. “So I was a bit nervous, especially knowing they had special needs.”

To her surprise, several students who joined Maringka for simple art projects in those early days were at least 20 years old. Some had graduated from Kyriakon School long ago.

“Outside of the school, there’s nowhere for them to go,” she says. Parents continue sending their sons and daughters there, she explains, so that they can at least feel productive and engaged.

As they did art together, the students started opening up to Maringka. Helped along by iPads and communication boards that show words and pictures, they told their stories. And for this alumna, the wheels started turning.

In her marketing role at Innate Motion, Maringka had learned to use an “empathy lens” on clients’ behalf. That is, to develop insights about a target customer’s motivations, which a company could then apply in shaping innovations and communications.

“Being trained that way,” she says, “allowed me to identify the problem that the students were facing.”

Seeing how they viewed their conditions as roadblocks to living a more fulfilling life, she was inspired to launch a company that creates a possible path forward. Its name — terARTai — comes from the Indonesian term for water lily, a flower that grows in the mud, where sunlight is scarce.

“It suggests that even in darkness and struggles,” says Maringka, “something meaningful can still be found.”

One student said, ‘Friendship reminds me of a river.’ I just found that astounding.

The company’s first project was a scarf collection called Sahabat, the Indonesian word for “friendship.” Maringka identifies a central theme each time she paints with Kyriakon School students, and then they all brainstorm around that idea. This time she had asked: How do you see friendship in your lives?

“All of these exciting and very unique perspectives about friendship started to come up,” she recalls. “One said, ‘Friendship reminds me of a river.’ I just found that astounding.”

That student, Gerry Mahadi, later explained he felt friendship was like a river because it should be about giving and ever-flowing. Maringka ran with the inspiration, creating basic designs out of Mahadi’s idea and those of a few other students.

“Imagine a coloring book,” Maringka explains. “I make outlines — like an outline of a river. Then I distribute the outlines and students develop them from there.”

Using paint to make the designs their own presents a significant challenge for some. Mahadi, for example, has cerebral palsy and can barely move his arms. He needs help from at least one person, sometimes two, to execute brush strokes. But the resulting artwork is indisputably his. He used a communication board to tell helpers exactly how the painting should look.

“Gerry was very critical,” Maringka says with a smile. “I felt like he was the art director.”

She selected four designs from those Sahabat sessions and produced 50 scarves, which went on sale in September 2019. Mahadi’s design, featuring a serene blue river filled with orange fish and two bright green hills dotted with deep red flowers, was the first to sell out.

Initially, terARTai had a fairly basic business model. Maringka sold the scarves in two sizes, priced from $20 to $25, through Instagram and at occasional pop-ups and bazaars. The artists received 20% of the proceeds.

“Every six months I create a report for each of the artists, and then I present the report to the school and to their parents,” she explains. “Then I give the students their money as well.”

In December 2019, terARTai released its second collection, Terang, which means “light.” There are six featured special needs artists, all affiliated with Kyriakon School, who work regularly with Maringka on the creative side. After initially funding and running the business by herself, the former Marketing major now has help from a co-founder and two interns. Plans include diversifying products and moving into bulk souvenir dnd B2B sales.

During the pandemic, bimonthly meetings with the students over Zoom have continued to fuel projects. Those included a collaboration with social media influencer Jessica Tanoe. “The Beginning of Hope” campaign experimented with some non-scarf offerings. A portion of proceeds went to special needs teachers, who have been disproportionately impacted by COVID-19.

The campaign’s name sprang from the pandemic, as “dead ends seem to be everywhere,” says Marinkga. “However, hope is still growing here and there.”