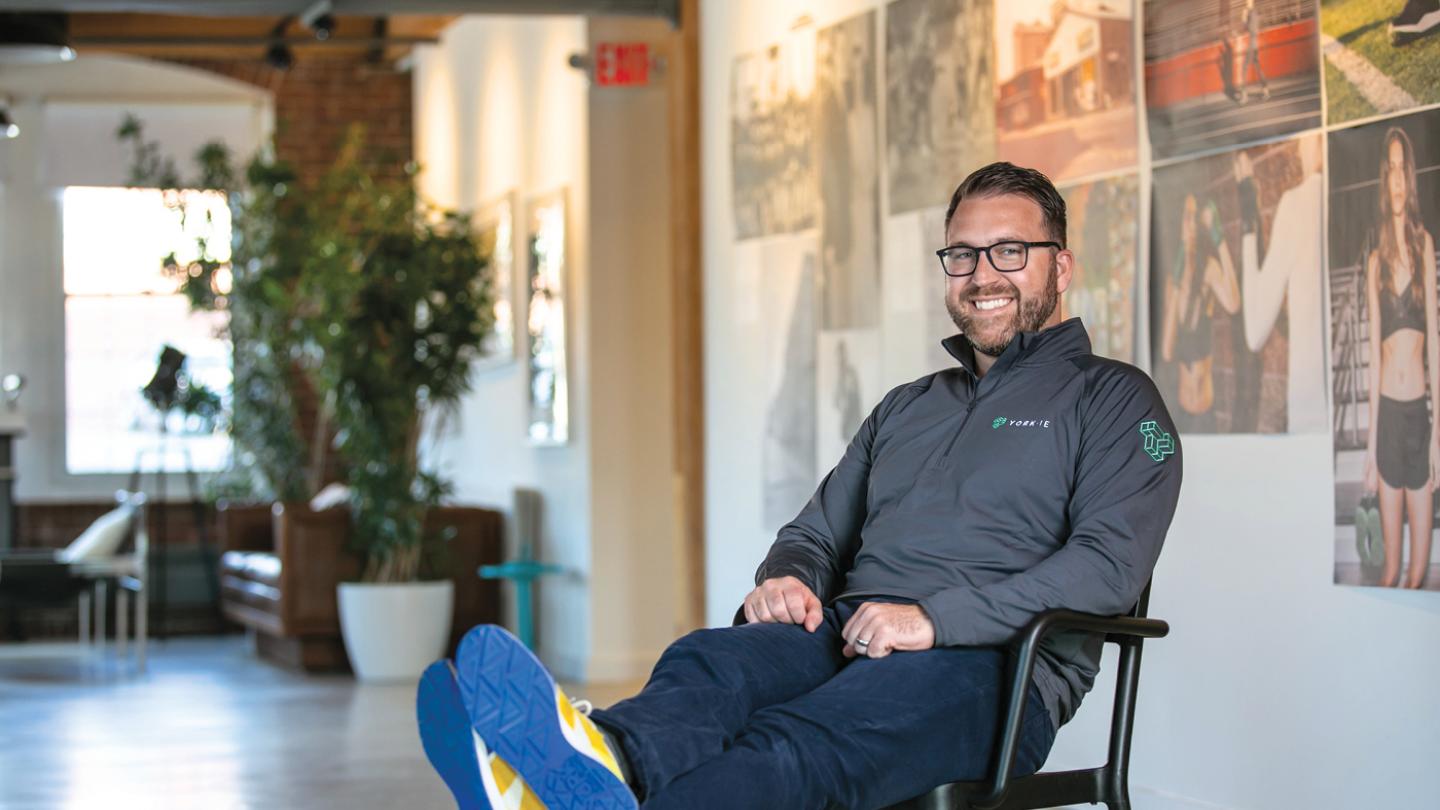 Kyle York ’05 is Rewriting the Playbook on Tech Investing

What Kyle York ’05 needed to disrupt the venture capital world came, in part, from a sporting goods store.

The co-founder and CEO of York IE helps tech startups grow without falling into the common traps of burning tons of capital or losing control to investors. And his approach in this high-stakes pursuit is rooted in the small athletics equipment business that his parents ran for 45 years in Manchester, New Hampshire.

“It’s a new-age spin on what we grew up witnessing,” says York, noting there was more to Indian Head Athletics than met the untrained eye.

Growing up, York and his four brothers pitched in with various aspects of the business: working retail or printing T-shirts or helping with the parking lot detail. Along the way, they learned the power of a good work ethic and the value of being deeply involved in the community.

Those principles — efficient growth, hard work, strong community ties — helped Indian Head Athletics survive some of its biggest challenges, including the onslaught of big-box sporting goods stores in the 1990s and the advent of online shopping.

Still, York knew early on that he wouldn’t make a career in sporting goods.

“I learned from my parents that success is not necessarily about being the smartest person in the room. It’s about being the most prepared and the hardest working,” he says. “They wanted us to build our own careers on that foundation.”

Those lessons — and an eye for the right opportunities — led York to his calling in the technology industry. He interned at an education software company called WhippleHill for several years while studying at Bentley. Within a couple years of graduating, York was in California running their West Coast sales and marketing operation.

Then came a call from a high school classmate who had co-founded Dyn, a New Hampshire-based company specializing in domain name infrastructure. He wanted York to be its first sales and marketing leader, and someone who would almost act as an additional founder as they evolved.

We learned that you could still scale a company effectively with a lot of those family-business-like values.

In York’s time there, the Dyn team grew from 15 to 500 employees working with some of the biggest Internet brands. They scaled the business from about $3 million in revenue to $100 million before selling it to Oracle in 2016, for a rumored $600 million. And they did it all without raising venture capital for the first few years — a rare feat for a startup.

“That startup world was much more about who can raise the most money and become a billion-dollar unicorn overnight,” he says. “We said, no, there’s a more pragmatic, thoughtful way to scale. We learned you could still scale a company effectively with a lot of those family-business-like values.”

York applied a similar approach as an adviser and angel investor to several startups before launching York IE. That foundational business perspective — which bears a resemblance to the core values on which his parents built their company — is a kind of antidote to the market pressures that exist in the tech world right now.

“There’s the idea that you need to pour tens of millions of dollars into a company to get it off the ground,” he explains. “We’re not saying don’t raise some capital. I mean, we’re an investment company. We’re just saying, raise the money you need. Maintain control of your startup.”

New Hampshire, not Silicon Valley, is home base for York IE. The company also bucks venture capitalist tradition by not taking a management fee. Instead, they take carried interest from their investment. It’s like a commission on the upside, York explains.

“It’s a very different model,” he says. “We think it aligns much closer with the entrepreneur than with just the money people.”

For example, if they put in $500,000 and the gain off that investment is $5 million, York IE would take a percentage of only that gain. So, they succeed only if the entrepreneur does. Whereas a traditional venture firm might raise a $250 million fund and then charge a 2% management fee to all the people or firms that provided that money. That, in essence, puts venture capitalists to work for their investors, York points out.

York IE’s strategy in working with companies goes beyond cashflow. He and his partners also act as consultants to the startups they invest in, offering up their years of experience in the technology industry to leadership teams who are just getting their business off the ground.

York IE launched in September 2019 and, at this writing, has fielded proposals by more than 300 startups — eight of which they are funding. The alumnus hopes it will be for him what eludes many in the tech industry: a forever company.

The family legacy continues in other ways as well. York and his brothers have relaunched the original business as YORK Athletics Mfg., an online shoe retailer. He wears their performance footwear every day — a tangible reminder of his roots as he works with today’s business leaders.

“What’s more entrepreneurial than working with dozens and dozens of entrepreneurs?” he asks. “That energy and that environment — that sort of culture — is incredibly inspiring.”