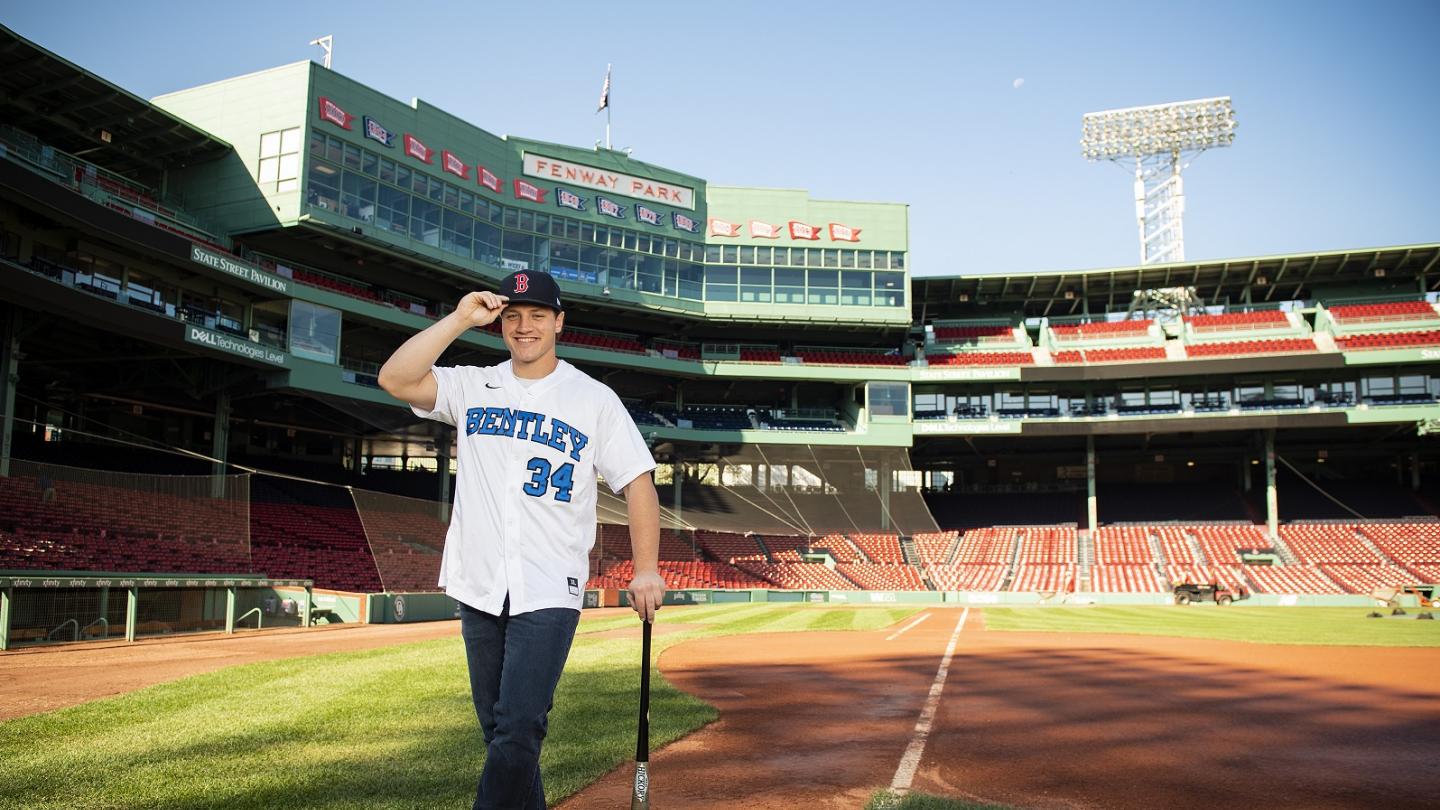 Ball in the Family

Ryan Berardino ’20 knew the 2019 Major League Baseball draft was coming up, but he didn’t want to get his hopes up. The Bentley first baseman didn’t think this was his year, but the Boston Red Sox had different ideas.

“I wasn’t really paying attention to the draft,” Berardino recalls. “I was at the barber shop when my phone started blowing up with texts, calls and screen shots that I was drafted. It was surreal.”

It was a couple of hours later when Berardino got the official call from the Red Sox. He was elated, but it didn’t take long until he thought about the fact that he still had his senior year at Bentley ahead of him. “Reality hit me an hour later; I had a big decision to make.”

Berardino turned to his grandfathers. Both have had professional baseball careers and long ties to the Boston Red Sox — Red Sox Hall of Fame right fielder Dwight Evans and Dick Berardino, a player development consultant and former minor league manager for the Sox. When Ryan told his grandfather Dwight Evans, a three-time all-star who won eight Gold Glove awards with the Red Sox, that he was planning not to sign with the team yet so he could finish college, Evans asked him why.

“I laid out the value of a Bentley marketing degree and the security it would give me if I ended up in the minor leagues, which are low-paying,” Berardino says of the conversation. “The degree would guarantee me good opportunities to earn money no matter where I landed in professional baseball.”

Evans, who was drafted by the Red Sox 50 years to the day before the team drafted his grandson, supported and respected Ryan’s decision. “That was big,” Berardino says. "It meant a lot to me."

My grandfathers are tough on me, in a good way. I’m the baseball player I am today because of them.

For as long as he can remember — and even before — Berardino was destined to play baseball. “I look at baby pictures and I would be wearing Red Sox stuff with a baseball bat in my hand. I’ve been in baseball as long as I’ve been alive.”

It’s clear that Berardino loves the game. But what he loves even more are the people. He recalls summer nights playing in the Sudbury Little League or on the Lincoln-Sudbury Bay State town travel team with his friends.

“Those simple times in baseball helped my love for the game grow. Once I got to high school, I realized it was something I wanted to do in college.”

That took hard work, and a list of injuries made it even harder for Berardino, including a back injury that put him in a body cast, a broken ankle, hamstring pulls, knee surgery and shoulder surgery.

So when it came time for college baseball, Berardino admits that a lot of coaches were not very understanding. “They would tell me I was too small or too injured.”

But after talking to Bentley Baseball Coach Bob DeFelice for just an hour, Berardino says he fell in love with the school, the baseball team and the coach. “Coach DeFelice believed in me. He believed that returning to baseball after my injuries was a testament to my character. He saw me as a person.”

Berardino took the opportunity “to play baseball and get an unbelievable education.” He made the All-Northeast 10 team in his first three seasons at Bentley and finished the spring 2019 season hitting .296.

But it hasn’t been an easy road. He broke his wrist and suffered a concussion his first year when sliding into a base head-first. (His grandfather Berardino is a “base-running nut” so Ryan jokes that he has been hearing about “never sliding head-first” ever since.) The Bentley team struggled his first couple years but had a strong season in spring 2019. “It’s incredible to look at the growth from my first year to now: the coaches, players and the university.”

For Berardino, adversity has its positives. “My best friends have come from sports because of the bonds we build playing, traveling and working hard. Even suffering through things as a team brings you closer together.”

Through it all, Berardino is humble about his success — something both grandfathers taught him. He stills calls them after every game. “My grandfathers are tough on me, in a good way. They’ve taught me to push myself and to always believe in myself. I’m the baseball player I am today because of them.”

For Berardino, hard work doesn’t just happen on the baseball field. “I always knew Bentley was a tough academic school and if I work hard, it’s going to pay off.”

Berardino is interested in a career in sales, but he isn’t ready to give up his dream of playing professional baseball. And now that he’s a senior at Bentley, when he re-enters next year’s Major League Baseball draft, if a team chooses him, he’ll be ready to sign on the dotted line. “I’ll have the security of a Bentley degree and the opportunity to give baseball a shot.”

Catch Up on Sports at Bentley