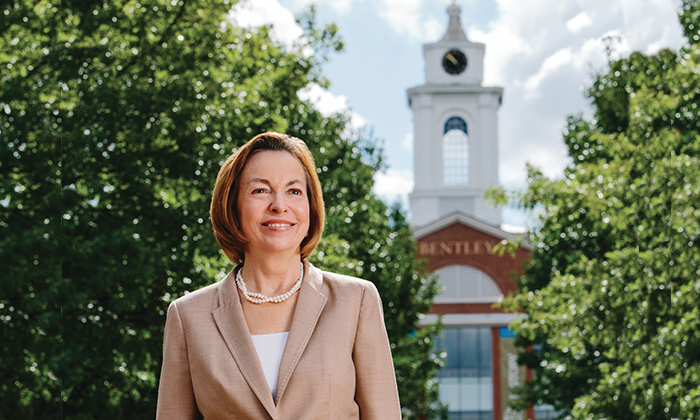 Bentley University President Gloria Cordes Larson announced to the college community in a letter today that she had informed the Board of Trustees of her intention to step down on June 30, 2018, after more than a decade of service. Under Larson’s leadership, Bentley transitioned from a regional business college to a nationally recognized, highly ranked university.

“To have had her leadership, her enthusiasm and her determination to put Bentley into a prominent position has meant a very great deal to this university and we could not be more grateful,” said Board of Trustees Chair Steven Manfredi ’73.

Larson has led Bentley since 2007. She deftly managed the university through the Great Recession and in a time of economic uncertainty launched Bentley’s PreparedU initiative and ROI-focused approach, preparing students with the market-ready skills needed for their first job and the lifelong learning abilities to assure long-term success.

As president, Larson expanded Bentley’s dual commitment to business and the liberal arts, while strengthening the university’s focus on hands-on learning and access to technology in the classroom. She supported career planning as a crucial aspect of the college experience for every student beginning in their first year. In 2016, Bentley’s Career Services was named #1 in the United States by The Princeton Review.

“It has been the highest honor of my long and varied career to serve as Bentley’s 7th president,” said Larson. “I could not be more proud of the university and our extraordinary family of alumni, faculty, staff and students.”

Larson will share insights from her decade as president in an upcoming book, PreparedU: How Innovative Colleges Drive Student Success. Board Chair Manfredi has appointed a 15-person committee, led by Board Vice Chair Robert P. Badavas ‘74, to search for Larson’s successor.