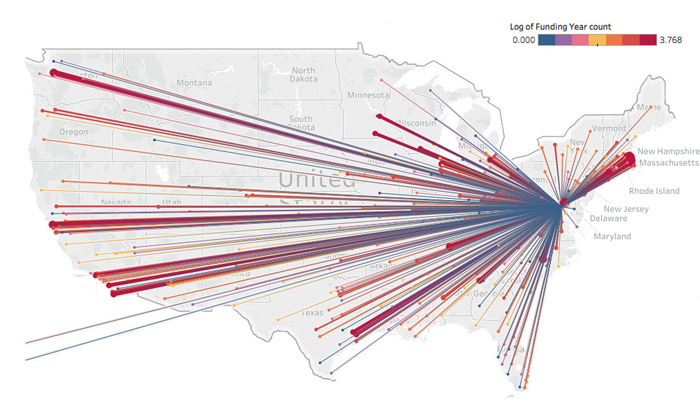 Federally funded research contributed to the science underlying all new medicines approved by the FDA over the past six years, according to a new study by Bentley University.

The new report from the Center for Integration of Science and Industry at Bentley University, published in the Proceedings of the National Academy of Sciences, shows that the United States government invested more than $100 billion in the basic research that led to new medicines approved by the Food and Drug Administration (FDA) between 2010 and 2016. Basic research explores fundamental biological processes without specific applications or products in mind. Every one of the 210 new medicines approved over this six year period was associated with research funded by the National Institutes of Health (NIH).  As much as $64 billion of this funding was associated with 84 innovative, first-in-class drugs, which treat disease through novel biological mechanisms or targets.

“While basic research can sometimes seem arcane, our analysis shows that a substantial fraction of NIH funded, basic research can be directly linked to the medicines first approved in this decade.” said Dr. Fred Ledley, Director of the Center for Integration of Science and Industry, and the senior author on this study. “This data underscores the critical impact of government funding for basic biomedical research on the drug discovery and development process. Any reduction in this funding would inevitably slow the pipeline of new treatments for diseases that the public so desperately needs.”

The Bentley study involved analysis of more than 2 million published research reports that were directly related to the 210 new medicines approved from 2010-2016 or to their biological targets. Of these, 600,000 published reports were identified as the work product of NIH-funded research projects. These projects involved more than 200,000 fiscal years of research funding and more than $100 billion in total cost. More than 90% of this funding was directly associated with research on the biological targets for drug action, rather than the drugs themselves, and represents basic biomedical research.

The contribution of NIH funding to new drug approvals is difficult to measure, in part, because so much of the NIH research budget is dedicated to basic research. The discovery of novel biological mechanisms and targets through basic research is an enabling step, leading to the discovery and development of new medicines for untreatable diseases.

Dr. Ekaterina Galkina Cleary and Dr. Jennifer Beierlein were lead authors of this work, along with Master of Science in Business Analytics candidate Navleen Surjit Khanuja and Dr. Laura M. McNamee. This work was supported by a grant from the National Biomedical Research Foundation.

THE CENTER FOR INTEGRATION OF SCIENCE AND INDUSTRY at Bentley University focuses on understanding and accelerating the translation of scientific discoveries to create public value. The Center is an environment for thought leadership and interdisciplinary scholarship spanning basic science, data analytics, business and public policy. For more information, visit www.bentley.edu/sciindustry and follow on Twitter @sciindustry.

Bentley University is one of the nation’s leading business schools, dedicated to preparing a new kind of business leader with the technical skills, global perspective and ethical standards required to make a difference in an ever-changing world. Bentley’s diverse arts and sciences program combined with an advanced business curriculum prepares graduates to make an impact in their chosen fields. The university enrolls approximately 4,000 undergraduate and 1,000 graduate students. For more information, visit www.bentley.edu