Breaking Barriers with Bitcoin and Basketball

As a high school basketball point guard growing up in Springfield, Mass., Yusuf Abdul-Ali ’08 was a bit of a big fish in a small pond. One of the best players at a small school, he didn’t get the college recruiting attention some of his peers across the city enjoyed.

Abdul-Ali knew he had the skills to make it at the next level. So if coaches weren’t going to come see him play, he figured he’d go play where coaches could see him.

“I wasn’t recruited by Bentley,” he says. “When I came up for a campus visit my senior year, I got into a pickup game with some guys from the basketball team. Coach (Jay) Lawson saw me play and made me an offer that day.”

The signing was vindication for Abdul-Ali and a huge get for the Falcons. From 2006-08, Bentley went an astonishing 66-2 (a perfect 44-0 in NE10 play), made the first two Elite Eight trips in the program’s history, and broke a 63-year-old Division II national record for longest regular season winning streak. The team spent Abdul-Ali’s senior season ranked No. 1 in the country, finally losing in the DII Final Four to eventual champion Winona State, the same squad that kept Bentley from perfection the year before.

“That still hurts,” says Abdul-Ali. “Every time I see purple jerseys I get goosebumps.”

Something like Bitcoin is showing potential to be a major factor in closing that financial gap. It’s important for people to understand that, and to not miss the boat.
Yusuf Abdul-Ali '08
Founder, The Bitcoin Classic 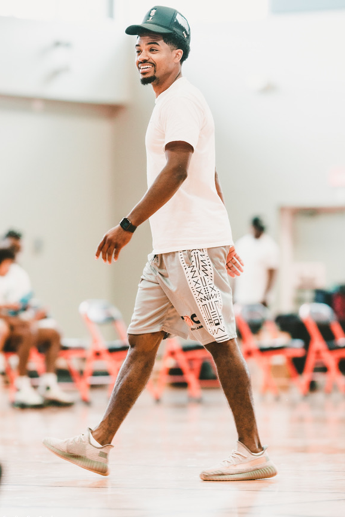 The Management major hasn’t lost his hustle. After earning a master’s degree in sport management from Springfield College, Abdul-Ali spent time coaching before starting a nonprofit, City of Guards, in 2014 that creates scholarships and provides guidance for Western Massachusetts student-athletes through basketball events, summits, and camps.

Now, he’s combining his love for basketball with his Bentley business acumen, with the hope of educating young people about the opportunity that exists in cryptocurrency like Bitcoin.

“I started investing in crypto two years ago and, for me, it was a great investment,” says Abdul-Ali. “I was able to build up a nice nest egg — nothing life-changing but enough where I could pay off my student loans, I could put something away for my daughter. It was a way of creating generational wealth for me.

“I’m a basketball junkie, so I thought, ‘Let me see if there’s a way I can put both of them together, where we’re getting people into Bitcoin and still providing an elite basketball tournament.’ That’s how it came about: Putting passions together.”

His venture, the Bitcoin Classic (TBC), is a traveling basketball tournament series that rewards its champions in Bitcoin. Players, coaches and fans are invited to free information sessions before each tournament run by Blockchain Culture founder Jasmine Brunson, as a way to reach out to a population that might not be familiar with the emerging world of cryptocurrency.

“There’s some education,” says Abdul-Ali. “Your first conversations are, ‘Wait, you’re paying us in Bitcoin?’ Yeah, we’re going to pay you in $25,000 in Bitcoin. ‘Wait, how much U.S. money is that?’ So you show them the numbers: It’s about timing so, if we did this tournament last year and you had won, it would’ve been worth a lot more. You give them that information and a lot of these guys just start to do their own research.

“It’s not just for a minority community, but a lot of the players who have signed up have been minorities,” he explains. “Sometimes we’re really late to things that can work in our benefit financially. It’s history: There have been a lot of hurdles that stopped us from generational wealth or things that could help us down the line. Something like Bitcoin is showing potential to be a major factor in closing that financial gap. It’s important for people to understand that, and to not miss the boat.” 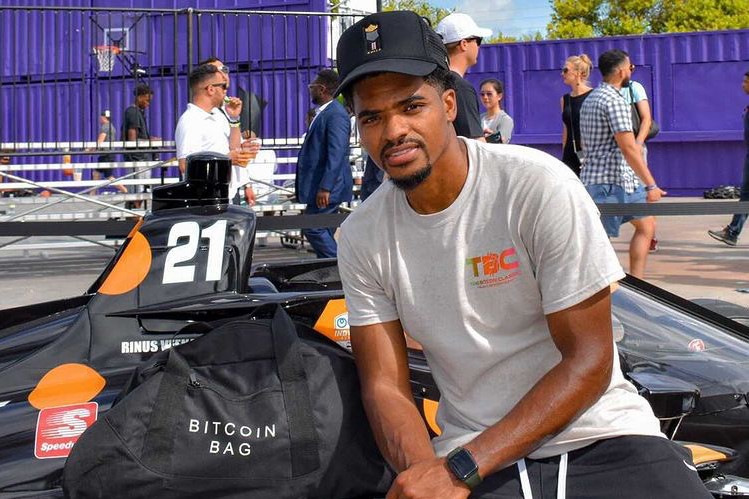 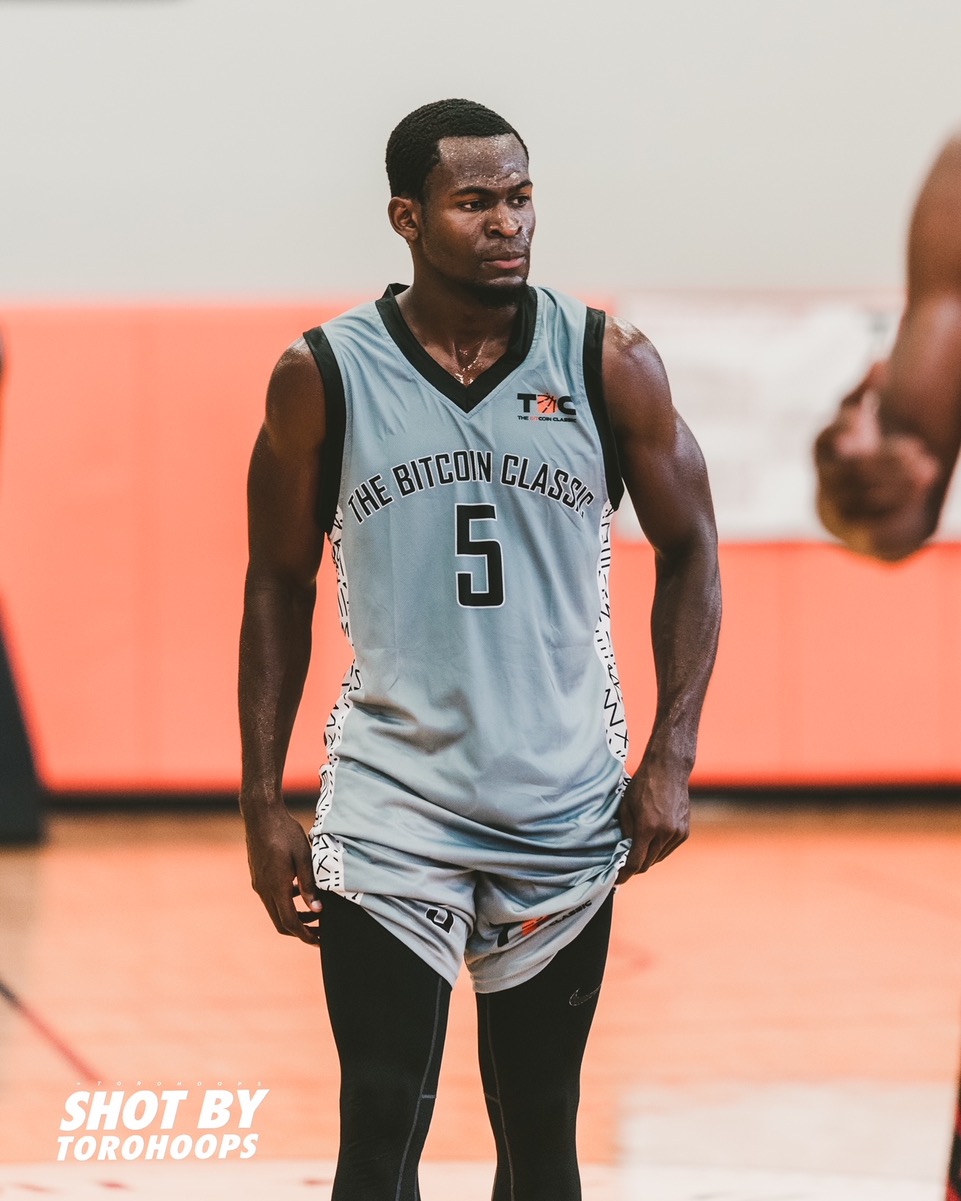 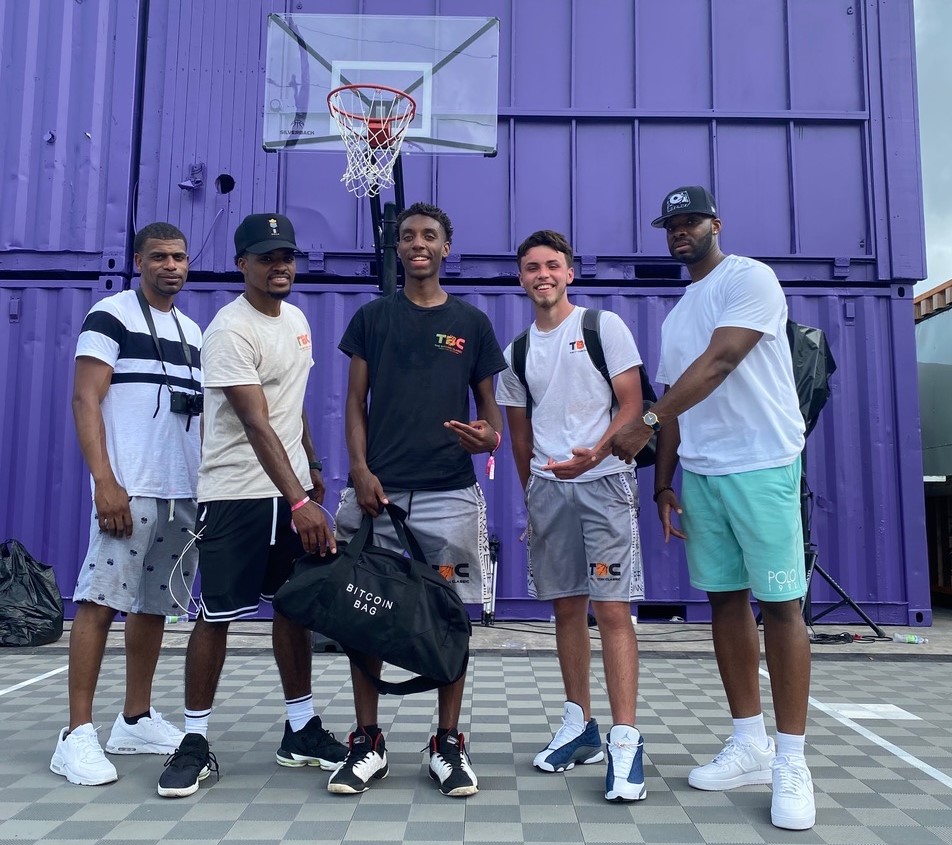 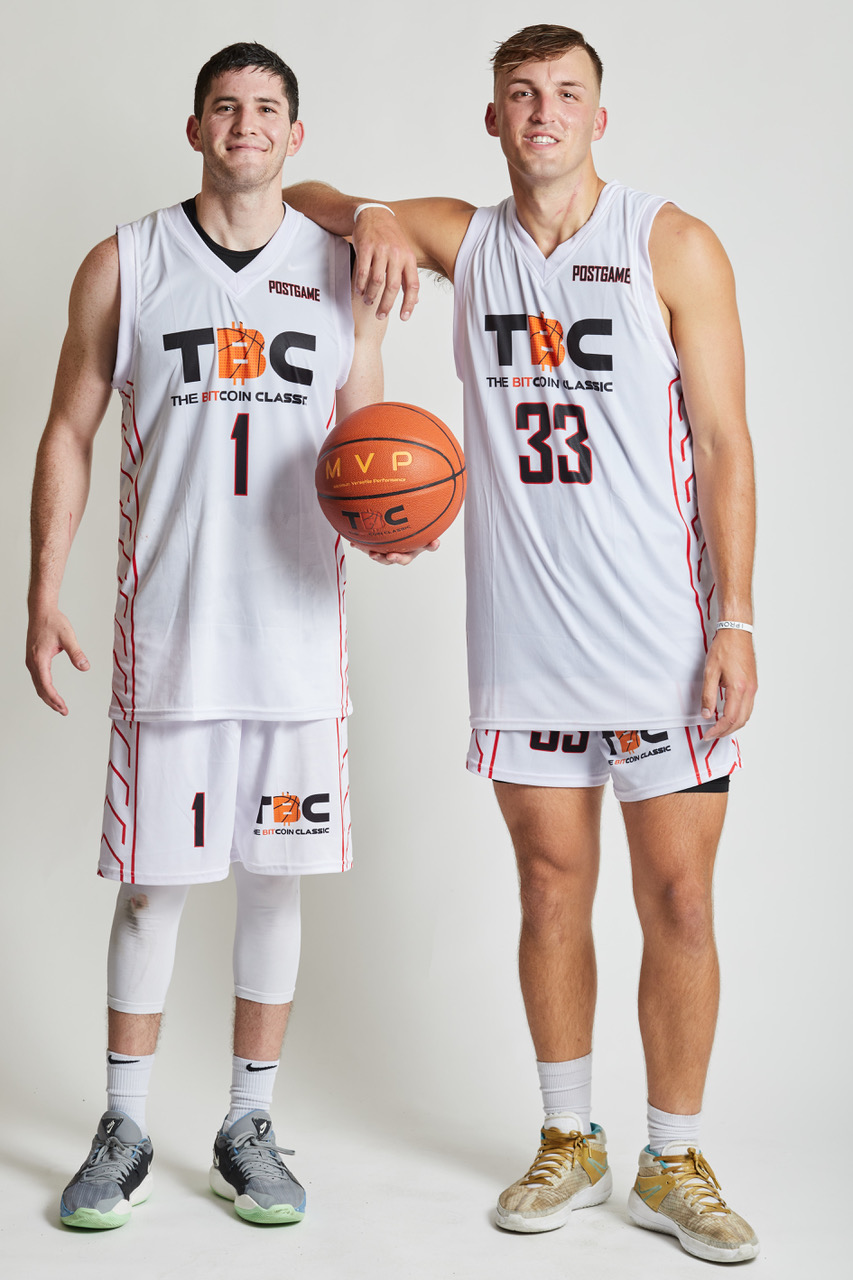 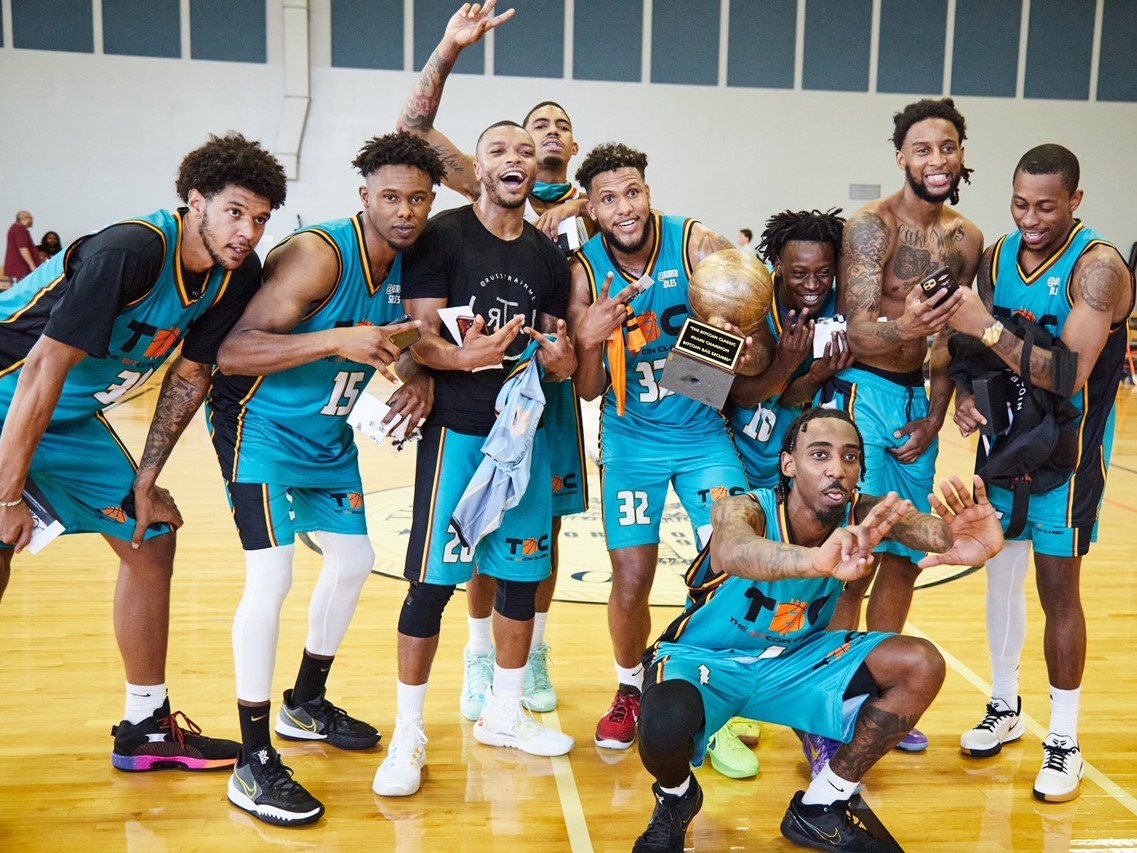 The Bitcoin Classic kicked off with tournaments in Connecticut in May and Miami in June, and a Greater Boston event is scheduled for August 14. Traveling teams of post-collegiate players and foreign pros home for the summer have provided some exciting action so far, and Abdul-Ali’s team continues to find ways to ramp up TBC’s “edu-tainment” value.

“The first year is about developing proof of concept to see how it works,” he says. “The basketball piece is going well. But it’s a lot of work. It’s a lot of recruiting — players, GMs, sponsors — and building relationships. For me, it’s like college coaching all over again.”

Abdul-Ali is already looking forward to 2022, with the hopes of building upon TBC’s early success, drawing in more sponsorship support, and expanding. But with everyone on his team working fulltime jobs (including Abdul-Ali, who is a marketing development executive at FedEx Services), it’s been a labor of love.

I feel like I’m still that point guard, trying to put people in the right positions. It’s a lot of maneuvering, anticipating, seeing ahead and having that vision of what you want.
Yusuf Abdul-Ali '08
Founder, The Bitcoin Classic

“Getting more sponsors is obviously going to be the hard part,” he says. “You hear a lot of no’s before you get a couple yesses.

“I feel like once Boston goes off, I can have everything on paper and six or seven months to promote it. Then I can really go in to somebody and have a structured presentation on what to expect. It’s been a bit of an uphill climb. I understood it going in, but once you’re in it, you’re thinking, ‘Why aren’t you believing in it like I am?’ It’s just so new. I get it.”

So once again, Abdul-Ali finds himself as the underappreciated talent who’s just going to have to work harder than the other guys. It’s a role he relishes.

“I feel like I’m still that point guard, trying to put people in the right positions,” he says. “It’s a lot of maneuvering, anticipating, seeing ahead and having that vision of what you want.

“I came to Bentley as someone who played a lot in high school. I was one of the better players on my team,” Abdul-Ali adds. “When I got there, I realized, ‘Oh, I have some work to do.’ I didn’t play the first two years. I was adapting to the system, getting stronger, getting better. So I think that translates to this. You gotta put in that grunt work for the things you’re passionate about. Maybe you grind for a year or two, but once you stay consistent, you’re going to get your shot.”

Meet Yusuf Abdul-Ali, the man behind the Bitcoin Classic