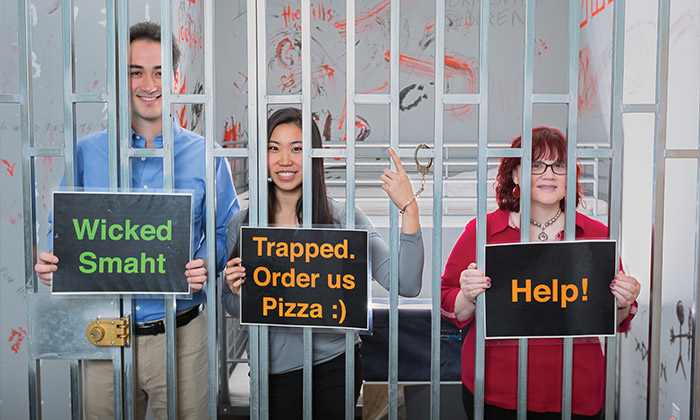 You’re locked in a room for 60 minutes with one mission: Escape! (No phones, by the way. And you may be handcuffed.) A unique storyline unfolds — say, attending a Red Sox game and landing in jail — as you and fellow participants search for clues and work to solve mind-bending riddles and brainteasers. Welcome to “live escape” game Trapology Boston, whose founders join a Bentley faculty member to reflect on teamwork, relationships and puzzle solving.

How did you come up with the idea for Trapology?

Nicole Chan: Jason and I met in Bentley’s theater group. We both have colorful imaginations, entrepreneurial spirits and a love of board games, brainteasers, video games and puzzles. We played a live escape game for a friend’s birthday and it was the best time we ever had. On a long plane ride back from a trip to Tanzania, we hashed out a business plan.

Jason Loeb: We liked the idea of having one hour where people can drop all technology and focus on a common goal that is completely unrelated to anything realistic in your life. The game can be played with friends, co-workers or total strangers. In 60 minutes of a fairly high-pressure scenario, people discover a lot about themselves and others, and what they’re capable of. It’s an escape from reality, like starring in a Hollywood movie.

What do people gain from the experience?

NC: Society often teaches us to color inside the lines and conform. Escape game experiences allow people to express creativity, encourage communication and support out-of-the-box thinking. It’s something different from the daily routine.

Donna Maria Blancero: If done with colleagues, an escape game is a “neutral” place to problem solve together. Sometimes in working with fellow teammates we can feel territorial about topics or locations; this is a chance for everyone to have the same information. Plus, it’s always a good idea to get to know the people you work with and this seems like a very fun way to do that.

JL: We get a lot of co-workers who show up not knowing each other outside of a professional office environment. When you’re “in prison,” suddenly there’s no hierarchy. Your boss isn’t your boss; she’s your cellmate trying to help you break out. Leveling the playing field creates a space of discovery as you start to realize someone’s skills and strengths … there’s more to this person than monthly budget spreadsheets. It’s about crushing preconceived notions and hitting the reset button.

Can a bizarre scenario such as a jailbreak really translate into everyday relationships?

NC: People who come in and think they can do it by themselves ultimately fail. Clear communication is crucial, and listening to everyone’s opinion. Sometimes, once the game is over and we walk through puzzles, someone will say, “I said that! Why didn’t anybody listen?” It’s a miniature wakeup call to learn you could have escaped if you had listened to teammates.

JL: When you’re thrown in with a group of people you don’t know, potentially handcuffed to them, you’re forced to introduce yourself, then listen to and respect others. It’s a foray into new adventures and with new people that pushes boundaries.

DB: In my Human Behavior and Organizations course, students work on a mystery game (similar to Clue). They quickly learn that they need to listen to each other to get all the facts. While I always hope that students will work hard to get the answer, at Trapology I imagine everyone absolutely wants to get the correct answer — so they are really working at it and using everything available to them. This includes talking with and planning with someone who is very different from them. I suspect that folks leave with a new appreciation for differences like age, race and gender.

Do certain kinds of teams tend to perform better?
JL: Definitely. The dynamic of the team comes down to people. Strangers tend to work well together because people don’t have preconceived notions about each other. They’re forced to listen to other people’s opinions because they don’t know them yet.

NC: The most successful teams are groups of strangers with differences in age, educational background and career, because they typically have different trains of thought. When we hosted a group with PhDs in the same discipline, their mindset was so similar they got nowhere in solving puzzles. Nobody stepped back to look at the bigger picture.

DB: I can imagine two types of successful teams. One is a work team that already collaborates very well. While sometimes that can lead to groupthink — where everyone agrees and doesn’t challenge others — a wellfunctioning, cohesive team would have individuals who are comfortable enough to play devil’s advocate. The other type of team I’d see working well is people who are very different, yet competitive. Those folks would likely ignore stereotypes and just care about getting the right answer.

Has any Bentley experience informed you along the way?
JL: The course GB 301 and the exercise of taking a company, breaking down their financials and marketing, and finding areas to target in regard to demographics and sales. That was huge in giving me the confidence to launch a business and determine that, yes, there is a market and we can be profitable. It’s daunting to take your own money and throw it into something.

What are some unexpected things you’ve seen?
NC: Couples break up, couples propose, employees yell at their bosses. In one session, a 14-year-old told all the adults in the room that they were over-thinking a puzzle — and then solved it, leaving them all speechless. 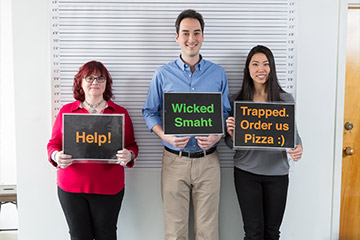 Donna Maria Blancero: The associate professor of management and assistant dean of business programs has expertise in organizational behavior, interpersonal relationships and diversity.