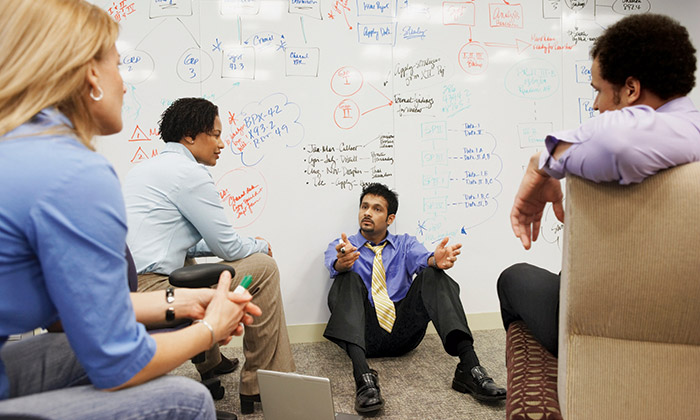 This is the first article in a recurring series on leadership.

I know what you must be thinking. Good enough? Is that the best you can do? To high-achieving students dedicated to excellence and perfection, and measured throughout their lives by grades and other accolades, good enough is more likely considered not enough, mediocre, or getting by.

While that may be the conventional wisdom, good enough actually has a deeper and more profound meaning, and the idea goes to the heart of our earliest interpersonal relationships. In my book, The Good Enough Manager: The Making of a GEM, I draw on the psychological theory of the good enough mother (or parent). The parent creates a “facilitating” environment for her child, meeting all of his needs in the beginning and adapting her behavior, gradually allowing the child more autonomy and room to add something uniquely his own to the relationship within well-established and secure boundaries. By recognizing and accepting her natural limitations, allowing for mistakes and failures, and responding to her child’s inevitable frustrations with empathy, support and guidance, the parent enables the child to emerge as a more authentic individual with a stronger foundation for navigating future relationships in groups and organizations.

As Peter Bregman recently observed, there is a natural link between the behavior of parents and managers, who can also create facilitating environments in relation to their employees and co-workers. In an age of uncertainty and constant change, adaptive managers who create workplaces characterized by autonomy within well-communicated and managed performance expectations are very responsive to the demands and emotional undercurrents of the current business environment. I define a Good Enough Manager — or GEM — as one that:

In my study, I asked people to describe and provide stories about their “best” and “worst” managers. Based on the ideas of more than 1,000 respondents, I concluded that the best managers shared many “good enough” qualities. They were seen as mentors and teachers, relationship builders, and models of integrity for their employees and co-workers while the worst managers were overwhelmingly described as micro-managers who stifled creativity and undermined these relationships. One person described his best boss as follows: “When my boss gave me tasks, he framed them by sharing a vision and goal. He did not give step-by-step instructions. Instead, he gave me the goal and set the guardrails — or boundaries. If I ever got close to a guardrail, he made it comfortable to approach him with questions. Instead of giving me the answer, he would ask more questions so that I could think up a solution myself. If I was performing fine (within the guardrails) my boss would trust me to execute on the vision or achieve the goal.”

In general, these GEMs were characterized as being emotionally authentic, tolerant of uncertainty, adaptive to change, and accepting of their own and others’ limitations and imperfections in the face of an ever-changing and turbulent environment. These managers also encouraged creative thinking and learning from inevitable mistakes and even failures. They were perceived as fair and honest in their dealings with others and remained a touchstone for their employees, long after the end of the formal reporting relationship.

One may ask, are these GEMs just special people or can one aspire to this kind of leadership? While many of these managers likely have some predispositions, their effectiveness is a combination of attitude and skill, much of which can be learned and practiced. I provide the following “Four C’s” as a foundation for becoming a good enough manager and leader:

As a professor of Interpersonal Relations in Management for more than 35 years, I have seen these dynamics play out in the classroom and on campus. Of course, we encourage our students to work hard, perform well, and accumulate high grades in order to position themselves well for the job market. But there is also a potential downside to this achievement mentality.

Some students, fearful of lowering their grade, refrain from taking risks such as speaking in class or taking on leadership positions in teams or organizations and thus may “achieve” more by a narrowly defined standard, but actually learn less. Some job recruiters recognize this and even ask job candidates to talk about a failure and what they learned from the experience during interviews.

It is very important for students to begin putting these four C’s to work during their undergraduate experience, especially developing the interpersonal and emotional capabilities that will enable them to take on challenges they will inevitably face in the workplace. As the world-renowned cellist Yo-Yo Ma once said, “Perfection is not very communicative. However when you subordinate your technique to the musical message, you get really involved. Then you can take risks. It doesn’t matter if you fail. What does matter is that you tried."

Aaron J. Nurick is a professor of Management and Psychology at Bentley University, and has been at Bentley for 36 years. Another version of this article appears as Good Enough Can Be Great, Harvard Business Review blog network, August 12, 2011.