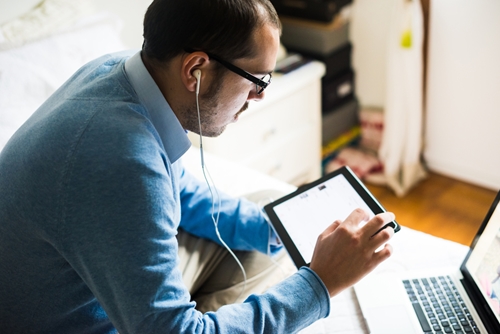 The Internet is improving lives every day. It's giving entrepreneurs the power to fund their dreams via group-funding platforms, students the opportunity to learn new skills with professors and classmates remotely, and even making viewing your favorite TV show quick and simple.

Advanced technologies are having a greater impact on your mind than you may believe, however. Modern tools are also making you more creative.

Creativity — that enigmatic concept artists use to paint the next masterpiece or write the next great American novel — isn't some ambiguous product of the mind. It's a measurable quality that can be dampened or amplified using particular tools and scenarios. It may come as a shock to the average tech user, but dozens of technologies that have become widely available within the last decade or so are boosting creative processes more than you could imagine.

Out from Behind the Easel and into the Boardroom

We recognize that creativity isn't only useful to musicians and painters. Many analysts claim it's a key determinant in business success. It's how companies differentiate themselves — with the original thoughts and ideas of their employees. And those ideas usually aren't gathered from one standout employee who contributes a steady supply of "eureka" moments. They're concocted in boardrooms and email chains with dozens of people sharing ideas, giving feedback and deciding on the best route to proceed with.

So now, with the Apples and the Facebooks and Googles of the world shedding light on it, creativity has been realized as one of the most valuable assets in the business world. How exactly are corporations harnessing that quality and amplifying it within groups and business units? More than that, how are employees using the technology at their disposal to bolster individual creativity in their work?

The Three Components of Information Exchanging

That's a question Monica Garfield, PhD -- a computer information systems professor at Bentley University -- can answer. She has worked on numerous published papers that analyze the connection between creativity in groups and technology.

According to her findings, there are three components that have incredible potential for changing creative outcomes using electronic communication prevalent in today's business setting.

"We are all capable of being creative," Garfield said." With the use of the correct tools our innate skills can be enhanced and harnessed."

Parallelism: Allowing Everyone to 'Speak' at Once

Imagine you're in a meeting with 10 individuals discussing the strategy for a big project. During a face-to-face interaction, each person will only have so much time to share their ideas. Only one person can speak at once for order to be maintained, which means each person would only get six minutes at most to share their thoughts within one hour. A cap is placed on the amount of ideas that can be generated.

Take that meeting to an electronic space — for instance, a message board where ideas can be typed simultaneously — and the cap is lifted. Multiple people can share at once and more ideas can be generated in less time. Garfield's study shows this may be one way groups can increase participation, improve satisfaction and provide more ideas.

This method is already used in dozens of electronic contexts, including social media sites, Web forums, or even your typical group text message.

Speaking of Web forums, there are already massive online communities harnessing the power of anonymity to boost creative outcomes. YouTube, Tumblr, Imgur, Reddit, Twitter — they all have a generous portion of anonymous users sharing their ideas — for better or worse. Creating an account free of identifying factors allows users to add content without repercussion, to a certain extent.

The way anonymity increases creativity is by destroying the conventional barriers placed on contributors. While the shy creative may refrain from sharing an idea with a group in person, that same individual may feel comfortable using an anonymous moniker online to share thoughts, amateur poems or the like.

This trend may have downright weird outcomes in online communities, but it can also be applied to company think tanks using anonymous user profiles on an intranet service.

Group Memory: Driving Future Contributions Using Records from the Past

During almost every boardroom brainstorm, there should be one individual taking notes. How else would the group learn what ideas were pitched and what feedback was given? But in this scenario, only the note-taker can refer to the history of the discussion during the meeting — unless contributors have incredibly keen memories. Over hours of deliberating or several days of meetings, keeping track of every project detail is difficult, making it hard to generate new ideas while still taking old ones into account.

This is one reason students and professionals alike have begun using online tools like Google Docs to conduct meetings. The tool uses a live feed that shares ideas instantly with everyone involved. Thoughts and feedback are immediately documented for all to refer to, and focus can be shifted to generating new information.

While anonymity and parallelism can both help generate more ideas, improving group memory can assist in controlling the decision-making process, keeping contributors on track with a singular stream of thought and cataloging relevant feedback.

There are dozens of ways creative solutions are being shaped by the technology students and professionals surround themselves with, and that's absolutely necessary for building competitive companies.

"From healthcare to software companies, the pace of change and the necessity to innovate is growing exponentially," Garfield said. "Using the right tools and the right time can help companies meet the demands of today's marketplace."

New ideas are being shared, critiqued and improved at a lightning-fast pace. Being the most creative organization doesn't mean just having the right talent. You need to use the right technology, too.

Check out our Master Class on Creativity