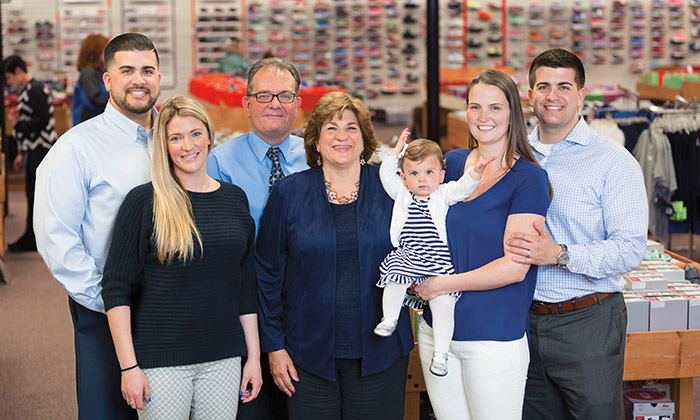 Identical twins Ryan ’08 and Brendan ’08 Carrigan were born for business. Mom Cindy and dad Joe, both Bentley Class of 1980 accounting grads, were their enthusiastic cultivators.

“We were learning about cash flows and sales when we were really young,” explains Ryan. “It was never a question of what we were going to study at college … it was which aspect of business will we study?”

Today, their collective Bentley degrees are serving them well. Cindy, Joe and Brendan run a shoe store that draws generations of loyal customers, while Ryan is a portfolio analyst at Fidelity Investments. Both boys were Finance majors.

The family story started 40 years ago this August, when Joe Carrigan and Cindy Swartz met during freshman orientation.

“I knew I was going to marry him,” she recalls, laughing. “I definitely pursued him. I used to ask the RAs to let me sneak presents into
his room.”

Joe pipes in, “She essentially stalked me until I finally gave in.”

Cindy doesn’t protest: “My mom always said you have to chase them until they catch you.” 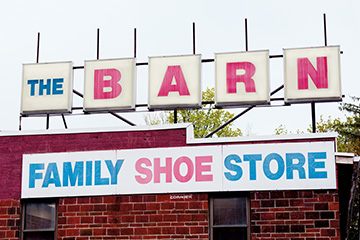 Their business partnership is a more recent affair. They inherited ownership of The Barn Family Shoe Store in 2015 upon the death of Karen Stives, a one-time Olympian whose father founded the company in 1948; Joe joined The Barn in 1991 and had been general manager for nearly 20 years. Brendan came aboard in 2012, choosing the family business over a law career. Cindy left a corporate accounting career to manage the business office in 2013.

While similar competitors are closing around New England, the Carrigan team is on solid footing thanks to a legacy of personalized customer service and high-end products. The Barn occupies 30,000 square feet in two buildings in the suburb of West Newton, Mass., and employs 40 people.

Ryan applauds his parents’ skills as business owners — and as husband and wife. “It’s a pairing that works so well. He’s good at big picture, she’s really good at detail.”

Brendan agrees: “They’re closer now than ever. It’s a privilege to see their marriage continuing to grow in front of me.”

Each family member has a formal title on paper, but it’s all hands on deck seven days a week.

“I’m wearing every hat in the business and really enjoying it,” says Cindy, whose father attended Bentley, but left to serve in World War II.

While Ryan is removed from everyday goings-on, his family —
wife Alicia (Donnelly) ’08, MSA ’09 and baby daughter Catherine Mary — does enjoy some company perks.

“Catherine is very spoiled,” he says. “She can have whatever shoes she wants.”