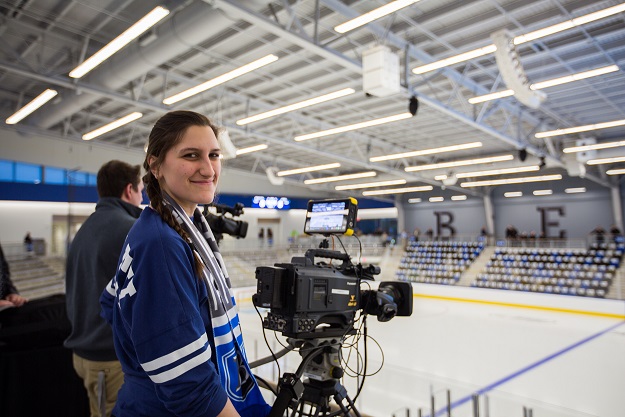 Jillian Offermann ’20 wants people to “get pumped” about Bentley, and in Bentley’s new multipurpose arena, she will help do that. Offermann will be behind the scenes in the media control room, cuing up videos and music on four LED video screens; helping monitor 10 HD cameras covering Bentley Hockey games and special events; and getting the crowd “pumped.”

“I want everyone in the arena to be proud to be a part of Bentley,” she says about working at games and events. “And I want them to come back to another game or event until they’re hooked on the excitement.”

A Media and Culture major, Offermann is leading a team of Bentley students who will operate the in-house media control room along with a small crew of production professionals. Thanks to her experience from an internship at Digital Multimedia Solutions (DMS)--operating headsets and video cameras and manipulating graphics at university arenas--Offermann has been a key player in planning for the new Bentley arena. She worked with Arena Manager Bo Stewart and Michael Goldberg, Bentley lecturer in Information Design and Corporate Communication, to brainstorm graphics and produce an opening-day video related to the arena’s brand.

“This is where I connect my media studies with the business side of everything,” Offermann says.

She has also been a key player in building and training the student team, and will serve in a technical director role: directing camera angles and shots, slow motion replays, and the Jumbotron.

“There’s so much thrill involved in never knowing what’s going to happen, especially with something like hockey or basketball where it’s so fast,” she says. “But there’s also preparation beforehand, like video, music, advertising, and even scrolling birthday messages. It’s half scripted, half go with the flow.”

Aside from the fanfare, Offermann has to be on her game, particularly when it comes to organizational skills.

“Through my internship at Digital Multimedia Solutions, I learned how much the control room in general fits my personality because I am really organized and very particular about things, which would be reflective of the script. But I’m also very easygoing so I like the live production.”

Founded by Bentley alumnus John Mitchell ’89, DMS installs Newtek TriCaster HD Control Rooms at universities, high schools, local access stations, radio stations, television stations, major and minor league sports teams and corporate clientele. During the internship, Offermann worked with Mitchell at arenas and stadiums like the one at UMass Amherst. In addition to the technical skills she gained, she also learned a lot about leadership, communication and about herself in general. “I never really wanted to work in sports and now I can’t get over how exciting it is.”

A trip to TD Garden with Mitchell, who is director of audio/video there, was eye-opening. “I got to watch a Boston Celtics basketball game from the control room, and it hit me that I was doing really cool stuff. A lot of doors were opening for me and I could imagine myself doing something like this as a career.”

Since then, Offermann has kept in touch with Mitchell and further built her network, making connections with sports production leaders at places such as TD Garden, Boston University and Northeastern University.

Mitchell, who helped design the media control room at Bentley’s new arena, has served as inspiration for Offermann. She says, “One of the best things that you can do is to leave an impact somewhere. I want to create a program at Bentley that continues to grow and get better far after I’m gone. I want to be an alumna who comes back for a game and sees the control room filled with students, and know that I got to be a part of helping to create that.”