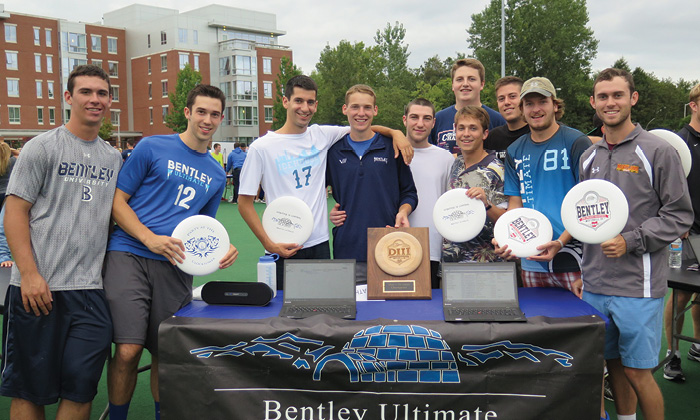 Team Spirit for All

Harry Bentley loved all sports, everything from baseball to horseback riding. He was even known to do gymnastics on the Boston Common during his lunch breaks.

Years later, students also found a way to play sports wherever they could. In 1962, before the college even had access to a gym (which wouldn’t be until 1973), Bentley adopted an intercollegiate sports program.

[Harry Bentley] was even known to do gymnastics on the Boston Common during his lunch breaks.

These first sports teams were not varsity but intramural, with Bentley students competing against one another. The teams included basketball, skiing, tennis, softball, weight training, candlepin bowling and golf.

Though not all of the original sports are still offered, the dedication of students remains firmly in play.

For many students, club and intramural sports truly define their college experience, with their common love of the sport bringing them together as family. In addition to several hours of practice a week and frequent games, many also choose to live with their teammates or hang out with them on weekends. Several members of the triathlon team even traveled to Iceland to compete during the summer.

These clubs mean business. The men’s rugby team, for example, meets four times a week for practice and team conditioning. The equestrian club managed to find a nearby horse stable and create a team despite the lack of horses on Bentley’s campus. And in 2014, several seniors in the Bentley Ultimate Society decided to forgo walking in their own graduation ceremony in order to compete in the DIII National Championship in Westerville, Ohio — which they won.