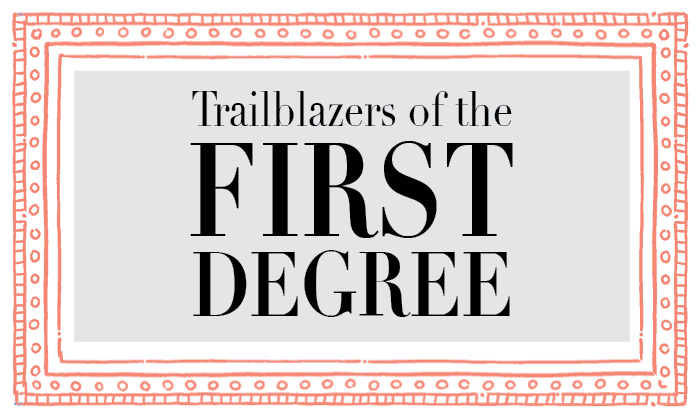 The Trials and Triumphs of ‘First-Gen’ Students

A first-generation student, as defined by the U. S. Department of Education, is one whose parents do not hold a baccalaureate degree. These trailblazers represent almost 25 percent of undergraduates at four-year colleges, spurring efforts to better understand their experience and help seed their success. At Bentley, a new task force is building on our tradition of serving this motivated group of learners.

First-generation students have a long history here. From Bentley’s earliest days in downtown Boston, enrollment grew as ambitious young adults detoured from their expected path. Instead of following their parents into manual labor, they saw an accounting diploma as a way into the white-collar world. A way up.

Th­at same drive is evident today. Bentley is home to hundreds of first-generation students — 17 percent self-identify as such and the actual figure is surely higher — and the university is championing their success in many ways. A task force of colleagues from across campus is leading the charge.

“We need to challenge the idea that all students have had family members who know the ropes, who have lived in a residence hall and navigated a campus,” explains task force member J. Andrew Shepardson, vice president for student affairs and dean of students. “College can be a real struggle if you don’t know what to do next.”

Shepardson has seen the focus on first-gen students rise and fall over his 25 years at Bentley. It is on the uptick, he says: “We recognize these are students we can serve better.”

Recent research provides better data and more detailed anecdotal evidence about motivations, outcomes, hopes and fears among first-generation students. For instance, the National Center for Education Statistics (NCES) reports that 69 percent of first-generation students attend college to help their family, whereas 43 percent of their peers count that as a motivator. Accordingly, a sense of responsibility is strong among first-gen students.

“Th­ere’s this quality of resiliency and grit,” says Michael McCorvey, director of Bentley’s Multicultural Center and another member of the task force. “Th­ey have the added pressure of ‘being the one’ in the family who’s going to do this.”

“I see first-gen students invested in a way that some other students are not,” confirms Shepardson. “Th­ey take on an added sense of responsibility for doing well.”

Raising awareness of academic, financial, social and other issues common among the group can encourage staff and faculty members to rethink their communication with and expectations of first-generation students. Equally important: understanding why some might not ask for help — or even make their first-generation status known.

“Students may wonder how they’ll be perceived,’” says Mario Silva-Rosa, director of undergraduate admission and a first-gen student himself. Many are highly self-sufficient, generally a positive trait for finding your place in college. But this same quality can prevent them from asking for help, lest they be seen as having failed.

According to the Educational Advisory Board (EAB), 24 percent of students at four-year schools identify as first generation. Why does this group attend college at a lower rate than their peers? Th­eir experience in high school offers some clues. A report by NCES in 2018 points to an achievement gap. For example, of high school students whose parents did not earn a degree, only 16 percent focused on an academic curriculum, compared with 37 percent of their peers. ­The same study showed that fewer first-generation students took Advanced Placement courses and upper-level math classes in high school.

“School counselors don’t always have time for meaningful conversations because schools, in certain cases, may be too big,” says Silva-Rosa. “We try to open the lines of communication, to bridge that gap with personalized attention and contact.”

He is referring to interactions during the recruiting process, such as when Bentley admissions counselors visit high schools, participate in college fairs or host events on campus. To build a diverse applicant pool, they travel to many types of schools and community outreach programs.

“A diverse student body is benefi­cial for rich conversations in the classroom and beyond,” says Silva-Rosa, noting that fi­rst-generation students, like all Bentley applicants, cross ethnicities and income levels. Identifying them at the outset is a challenge, though. During the initial outreach to high school students, he explains, colleges typically don’t have data about parents’ educational status. (Student information is often shared with colleges from the PSAT, which does not collect that parental data.) Even so, he says, “We can be intentional about reaching out to schools that are likely to be fi­rst generation.”

Some students do share their ­first-generation status after an initial contact with Bentley. Admission counselors can then share information accordingly, for example, helping to ease concerns around choosing a major, being matched with a roommate and other general topics.

Admission and ­financial aid are high on the list of concerns; for example, addressing the cost of college. It’s a common misconception that private universities are more costly than public universities to attend, based on actual price paid. Silva-Rosa says that higher education, in general, needs to do better at dispelling this notion. For example, explaining options for need-based aid is key.

“We don’t want a student to shy away from an institution,” he says, “or self-select out of schools and then miss out on opportunities that might be right in front of them.”

At Bentley, where about 70 percent of undergraduates receive some form of ­financial aid, options include endowed funds designated for fi­rst-generation students. Others, including the Hearst Scholarship, help students from underrepresented areas and circumstances; recipients like Sanjana Dhir ’07 were often the ­first in their family to attend college.

At Bentley, where about 70 percent of undergraduates receive some form of ­financial aid, options include endowed funds designated for fi­rst-generation students.

According to data from higher education consulting fi­rm EAB, about 25 percent of ­first-generation students leave college after their fi­rst year. The reasons go beyond academics to include affordability, family obligations, illness or injury, and the need to work full time.

Then there is social pressure. Nearly all college students, at some point, worry about making friends and fi­tting in. But EAB found that fi­rst-generation students maybe more likely to doubt their sense of belonging, to question if they deserve to be in college. They also may feel left out if activities require funds beyond their budget.

“These are difficult conversations to have,” Silva-Rosa says of instances where ­first-generation students may have more limits than their classmates. Over time, feelings of doubt and isolation may prompt a student to leave college.

“Some have local ties and commute to campus,” he says. “Family obligations can make it more challenging to be part of student organizations.”

“We make sure all students are engaging with us. It’s about putting them on the path for long-term success, not about getting a ­first job,” says Alyssa Hammond, who directs Undergraduate Career Education and Outcomes.

Career Services doesn’t track students by ­first-generation status. But being the fi­rst in a family to attend college is something that may come up in a one-on-one coaching appointment. Staff members can then recommend resources or events that might be extra benefi­cial. In fact, professional development is among the more vital resources for fi­rst-generation students, who are so often motivated by helping their family and in school specifi­cally to obtain a good job.

“There’s that added pressure of ‘it’s on me to be a success,’” says Hammond. “They’re the pioneer in their family. They want to do well.”

Programs offered to all Bentley students such as mock interviews may be especially helpful. Networking, too, is a powerful tool. An estimated 70 percent of jobs are found through personal connections and 80 percent of positions are not advertised. In these cases, Hammond suggests broadening the network of potential resources. For example, parents of a fi­rst-generation student may have friends who work in a ­field of interest to their student.

Internships during college are a tried and true route to employment. Some 65 percent of students are recommended for full-time positions at their internship site. But this opportunity to be in the right place at the right time may not be an option for ­first-generation students.

“Not everyone can do an unpaid internship or co-curricular experience,” says Shepardson, noting that doing so can mean giving up a paid job on campus. “First-generation students are working hard to be here, and we want them to get the most out of their experience.”

First-generation students are working hard to be here, and we want them to get the most out of their experience.

Hammond agrees, calling fi­rst-gen students “some of our most motivated and hardest-working students. They know how important it is to be here. We want them to leave empowered, knowing they have a career toolkit.”

Paradoxically perhaps, task force members look forward to the day they disband. McCorvey anticipates seeing the full campus community committed to understanding what it means to be fi­rst generation and being “more mindful of the language we use and policies we create. It should be the culture of who we are.”

Shepardson agrees and reflects back on Bentley’s founding principles of an accessible education. “First generation students are the epitome of who we are. We’re using education to transform lives, and our history is ever more important in our future.”

The Power of An Encouraging Word

Our original fi­rst-generation student was Harry C. Bentley himself, according to research by Professor of History 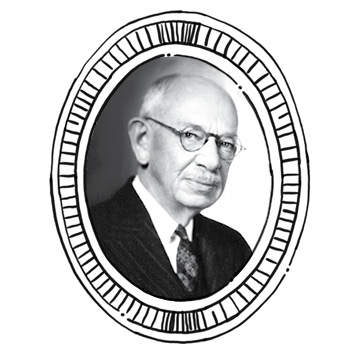 One day, upon seeing Harry’s nose buried in an accounting textbook, his landlord asked what he was doing. Upon hearing his career goal, the landlord observed, “Harry, you’ll make a great accountant one day.”

The young man was stunned; it was the ­first time anyone had suggested he was going to amount to something. As Mr. Bentley would later write: “Those encouraging words changed the entire course of my life.”