Sanjay joined Bentley University as the dean of business in June 2022. He previously served as dean of business at Cleveland State University and the University of Wyoming. Prior to this, he served as associate dean and chair of marketing at the University at Albany, SUNY. In his various administrative roles, he successfully led capital campaigns, introduced innovative programs, secured AACSB reaccreditations, developed international partnerships and established new centers of excellence. Over the course of his academic career, he spearheaded numerous initiatives to enhance academic excellence, student success and community engagement. He has received several teaching, research and service awards. Sanjay obtained his Ph.D. in Marketing from the University at Buffalo, SUNY and his Master of Management Sciences degree from Birla Institute of Technology and Science in Pilani, India. 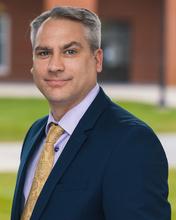 Aaron joined Bentley in 2002, and has served in the Dean’s office since January 2020. He previously served as the Director of the Honors Program for six years, and chair of the Economics department for two years. His interests in both teaching and research revolve around macroeconomics, with a special emphasis on the role of monetary policy. Conducive with his interest in monetary policy, Aaron co-advised Bentley's highly successful Fed Challenge academic competition team from 2008 to 2019. Aaron teaches intermediate macroeconomic theory and monetary economics courses regularly, has three innovation in teaching awards, and a lifetime teaching excellence award. His published research includes journals such as Economic Inquiry, Macroeconomic Dynamics, Applied Economics, and the Journal of Macroeconomics, and is the founding editor of Fusio: The Bentley Undergraduate Research Journal. He has also authored the study guide to accompany Frederic Mishkin's "Macroeconomics: Policy and Practice", and Mishkin's widely used "The Economics of Money, Banking, and Financial Markets" textbooks.