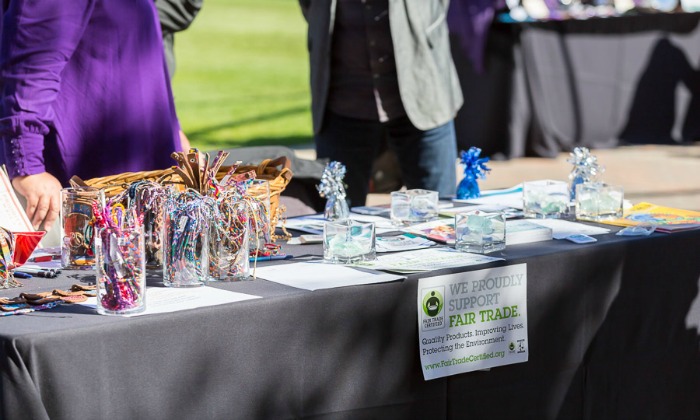 Want to get a fair trade job? Or learn from the experts in the industry? Here are four things to keep in mind. 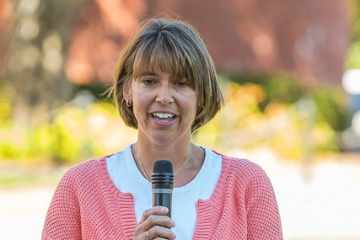 When Allyson Myers ’93 graduated from Bentley University with degree in Business Management & Communications, she didn’t expect to play a role in the fair trade movement. She took a job at Lake Champlain Chocolates right out of college, well before the company received its “Fair for Life” Social & Fair Trade Certification in 2013.

Myers is currently the director of sales and marketing, and was one of the speakers at this fall’s second annual Fair Trade Fair, co-hosted by the Bentley Service-Learning Center and the Office of Sustainability. Twenty-one vendors, who sell goods ranging from coffee to handbags, attended the fair, which gave students the opportunity to hear from leaders in the fair trade world, learn about the industry, and sample fair trade products.

A trip to the Dominican Republic helped Myers understand fair trade’s significance in the world of business. Traveling with FairTrade USA Founder Paul Rice, she saw first-hand the starting point of the products she sold every day, meeting with the local farms that grew and roasted her company’s cocoa.

During the visit, parents and grandparents who had worked on fields their entire lives told her their kids no longer wanted to grow cacao (the raw, unrefined bean that is roasted into cocoa). “They wanted to move to the city, they wanted to work in technology, because there wasn’t enough money for them growing cacao anymore,” Myers explained. 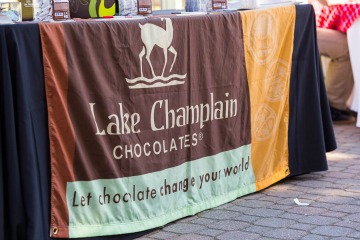 Without the cacao, there was no cocoa, and without cocoa, there was no chocolate, and no Lake Champlain Chocolates. That realization brought Myers to the realization that, “As an industry we have to educate people in understanding that we’re not paying farmers enough for the work they’re doing…The cheapest product isn’t always the best product. You really have to think before you buy: what are you paying for?”

The low pay for farmers wasn’t just a problem in the Dominican Republic. Lake Champlain Chocolates is located in Vermont, an agriculture state. “Most family farms have gone out of business because the younger kids don’t want to milk the cows and don’t want to be in agriculture,” said Myers. “We have the same challenges in agriculture whether it’s here in the United States or around the world.”

Think before you buy: what are you paying for? says @LCChocolates @bentleyu grad. #fairtrade

What You Can Learn from Fair Trade

The fair trade movement ensures all members along the supply chain are being compensated fairly, and is a growing part of the business world. Though Myers didn’t anticipate working at a fair trade company, looking back she sees three four lessons that she learned in college and have guided her career:

Learn how Bentley is re-thinking green and joining in the sustainability movement.