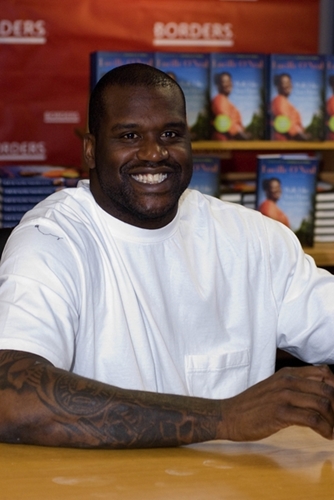 Finding fame and fortune after receiving an MBA degree isn't exactly the norm. Most graduates are happy with becoming executives, opening their own businesses or moving onto greater opportunities at a corporation. Don't sign off on getting a star on the Hollywood Walk of Fame just yet, though.

There are a few dozen big names from the world of sports, the silver screen and beyond that hold MBAs and other business degrees. Here are some of the most recognizable names.

Once the biggest man on the basketball court, Shaq has made a name for himself in multiple arenas outside of sports too. He's become a celebrated basketball analyst on TNT, a reserve police officer in South Florida, a decent comic per his chops at Justin Beiber's roast, and how could anyone forget his time on the big screen with box office smashes like "Kazaam?"

Joking aside, the greatest successes in Shaq's life - other than those four championship rings - may be related to his education. According to Time magazine, the former athlete earned his bachelor's degree from Louisiana State University eight years after leaving school early to join the NBA, he received a doctorate in education from Barry University in Miami Shores in 2012, an MBA from the University of Phoenix, and he doesn't plan to stop there. According to ABC News, he wants to tackle law school next.

Costner's personal field of dreams wasn't a cornfield or movie set back in the early 1970s. It was a classroom at California State University, Fullerton's College of Business and Economics, where he graduated in 1976, according to a school brochure. The university lists him as a graduate, college friend and "a Titan baseball fan."

After competing in Mr. Olympia six times, Schwarzenegger set his sights on getting his degree in international business and international economics from the little-known University of Wisconsin-Superior in 1979, according to the Los Angeles Times. Still early in his celebrity career, Schwarzenegger completed much of the course work remotely from California as part of the university's extended degree program. He even received a degree with a focus in fitness marketing and business administration in 1980.

While Schwarzenegger received the degree from the University of Wisconsin-Superior, much of his credit was actually accumulated elsewhere. Credit from his time at Santa Monica College and in UCLA's extension program transferred over, and he even received credit for "life experience" as part of his bodybuilding career. Despite his best efforts, he didn't receive acting credits for his B-film "Hercules in New York," according to the news source.

Mehmet Oz may not get the most welcoming feedback as a doctor giving advice on "The Dr. Oz Show," but it would appear he's a successful media businessman at the least. That may not come as a surprise considering the day-time talk show host was one of the first students to ever simultaneously earn a Wharton MBA and a University of Pennsylvania M.D. at the same time, according to Wharton Magazine.

He told the news source that he always wanted to be a surgeon, but the business side of health care was equally important.

"I realized that, in medicine, if you don't understand how the hospital actually makes money, you aren't going to be able to run the kinds of programs you want to run," he said, according to the magazine.

The 43rd President of the United States has been remembered for many things. Still some forget that he was the first ever president to take office with an MBA. Bush studied at Harvard Business School, graduating with the class of 1975.

Perhaps one of the most interesting stories from his educational experience, The New York Times reported that one professor reflected during a class that a student could become president of the United States some day. Relying on humor, Bush raised his arms in the V-for-Victory gesture popularized by Richard Nixon.

The dropouts
For other big names, the call of fame and fortune came too soon to complete the business degree pursuit. Here are a few honorable mentions you may not have known about.

Tiger Woods was an economics major at Stanford University for two years before leaving to become a professional golfer. If you ran a cost-benefit analysis on the decision, Woods probably made the right choice. He was making $100 million annually as a golfer at the peak of his sports career, according to Time magazine.

Catherine Blanchett enrolled and graduated from the Australia's National Institute of Dramatic Art in 1992, but before that, she was taking classes at Melbourne University in Fine Arts and Economics, Lifetime reported.

Beicio Del Toro studied business at the University of California at San Diego, but was hooked on drama after taking an acting elective course. After leading several student productions, he traveled to New York for a drama festival at the Lafayette Theatre and decided to stay in the city to act.