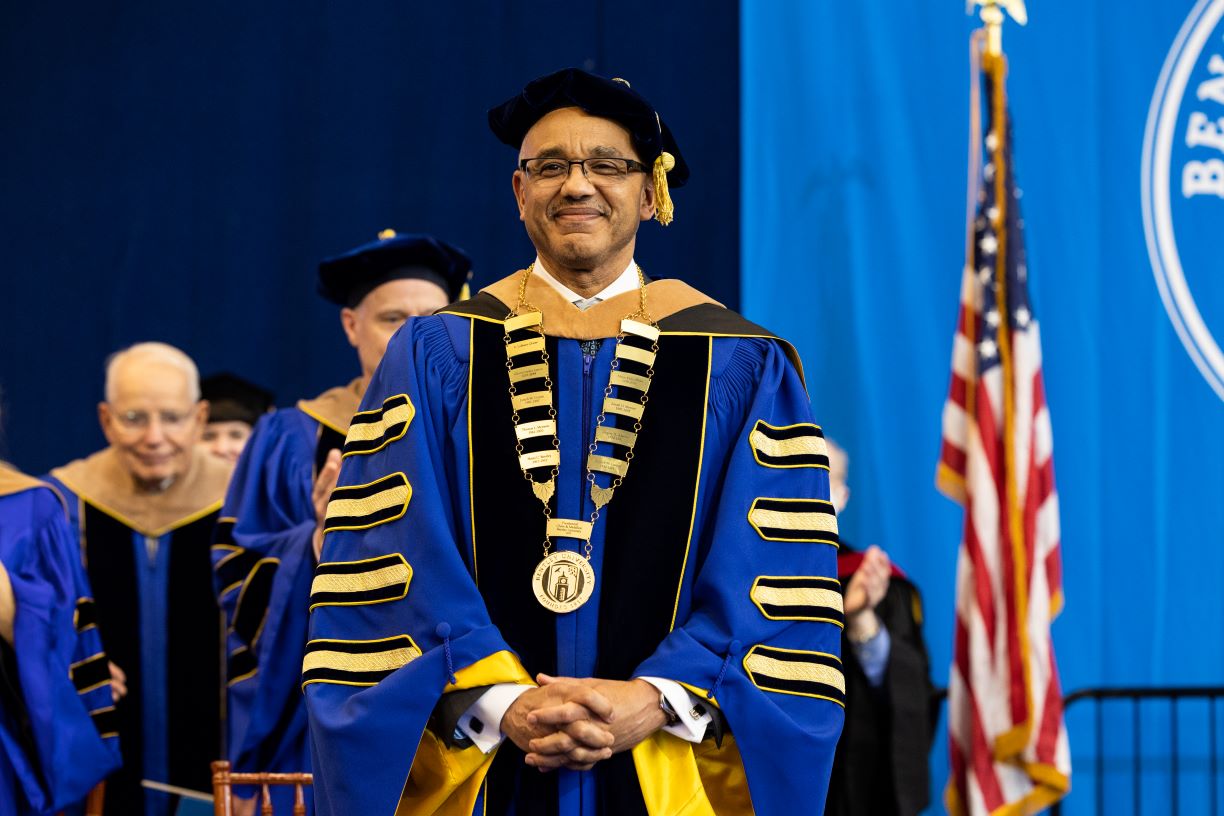 More than 1,400 students, faculty, staff, alumni, trustees, friends of the university and representatives of other colleges celebrated the inauguration of E. LaBrent Chrite, PhD, as the ninth president in Bentley University’s 105-year history. In a livestreamed ceremony in the Bentley Arena, Chrite was welcomed and praised for his leadership skills and strong belief in business as a force for good in the world.

“President Chrite personifies our strong belief in the power of business to create solutions to human problems,” said Bentley Trustee Chair J. Paul Condrin III ’83, P ’19 ’22. “For much of his career, he has dedicated himself to improving business education, developing market-based economies and expanding economic opportunities for organizations and people around the world. President Chrite is a shining example of the type of leader we hope all of our students aspire to be — using knowledge, wisdom, compassion and a strong business mindset to change the world.”

In a tradition-steeped ceremony at the Bentley Arena, Chrite walked to the stage as part of an academic 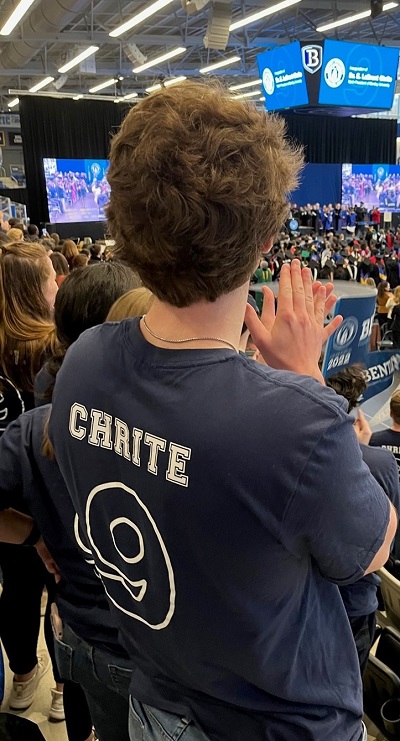 procession of more than 200 delegates, many from other colleges and universities who were lined up precisely based on the year of their founding, from Harvard University (1636) and Yale (1701) to William James College (1974) and Olin College of Engineering (1997). The delegates wore satin-lined hoods and brightly colored cassock-like gowns reflecting the college that awarded their highest degree and the field in which it was earned — beige for Accounting and Business, copper for Economics, purple for Law.

As he rose and stepped to the podium, Chrite looked over an audience that included his wife Phyllis, children Elrie, Adriana and Jordan, and friends from across the country. Blue inauguration pennants waved throughout the crowd, and many students wore inauguration T-shirts with “Chrite - 9” on the back to welcome and honor the university’s ninth president.

Chrite said he and Phyllis were “deeply moved by the outpouring of support, goodwill and generosity expressed here this afternoon.” He said Bentley’s greatest strength is its ability to empower the next generation of students and business leaders to realize their full potential.

“The American Dream includes the possibility that all citizens have the opportunity to move up — or down — the economic ladder,” he said. “In a society that is neither fully meritocratic nor egalitarian, higher education in general and places like Bentley in particular represent a vital gateway to mobility.

“Mobility, access and opportunity are ideas that were central to our university at its founding,” he said.

‘Bentley’s bold bets for the future’

Bentley was founded by Harry C. Bentley in 1917 to prepare a new generation of students for professional careers in business, and the university has been reinventing business education for more than a century. Chrite, the university’s first Black president, has worked to develop the private sector and spur development and economic opportunities for residents around the world, including in Afghanistan, Africa, Central Asia and the Middle East.

Trustee Nick Stavropoulous ’79, in remarks read in his absence by fellow trustee Lebone Moses ’02, praised Chrite as “a leader who may look unlike any we’ve ever had but whose commitment to using business to do good in the world represents every single one of us.”

Chrite started as Bentley’s president on June 1, 2021, but asked that his inauguration be delayed so the university could focus on students last fall and a full return to operations after the pandemic.

Spar, who also serves as a university trustee, said in her keynote address that Chrite was the type of educational leader who remains “perpetually willing to seek and revel in the magic that education can, and should, bring.”

“Brent is that kind of leader,” she said. “He has seen the transformative power of education in his own life and has dedicated his life to bringing that same transformation to others.”

B. Joseph White, PhD, president emeritus at the University of Illinois, has known Chrite for 30 years since they worked together at the Ross School of Business at the University of Michigan. He said a university president has many jobs, including setting the school’s direction, raising money and being chief HR person for the faculty – but those aren’t the most important.

“The most important job is creating an environment in which young adults with the guidance of the faculty can learn, develop and thrive. Find their way. Nail down their values. Experience achievement. Overcome adversity. Prepare for the future,” White said in his keynote address. “Brent will deliver that leadership: firm and friendly, with clarity and consensus, through diligence and deliberation.”

Others spoke of the connections Chrite had quickly made with the Bentley community. Since arriving on campus, he has become a popular and often-seen fixture working out at the Dana Center gym, participating in on-campus events or just walking around campus with his backpack from meeting to meeting.

“I see President Chrite as the president of the masses,” said Hiral Mehta MSBA ’22, MBA ’22. “Through my interactions with him both formally or informally, at graduate events or at the gym, what stuck with me is his rigor and passion to make a difference and create a strong, diverse and engaging community.”

After the keynote addresses were finished, Board Chair Condrin stepped to the podium and called Chrite forward for the moment all had been waiting for. Condrin lifted the university’s presidential medallion — a chain symbolizing the authority of the office that includes the names of every past Bentley president — over Chrite’s head and placed it onto his shoulders.

“We are confident that your enthusiasm for Bentley University’s mission, vision and core values; your wise and collaborative leadership style; and your belief in the power of business to create solutions to human problems will enable the institution to fulfill its great promise for years to come,” Condrin said. “On behalf of the board of trustees, I welcome you as president of Bentley University. You have our full confidence and unwavering support to lead this institution through the next chapter in its history.”