Commencement Returns to Campus as Bentley Celebrates the Class of 2022 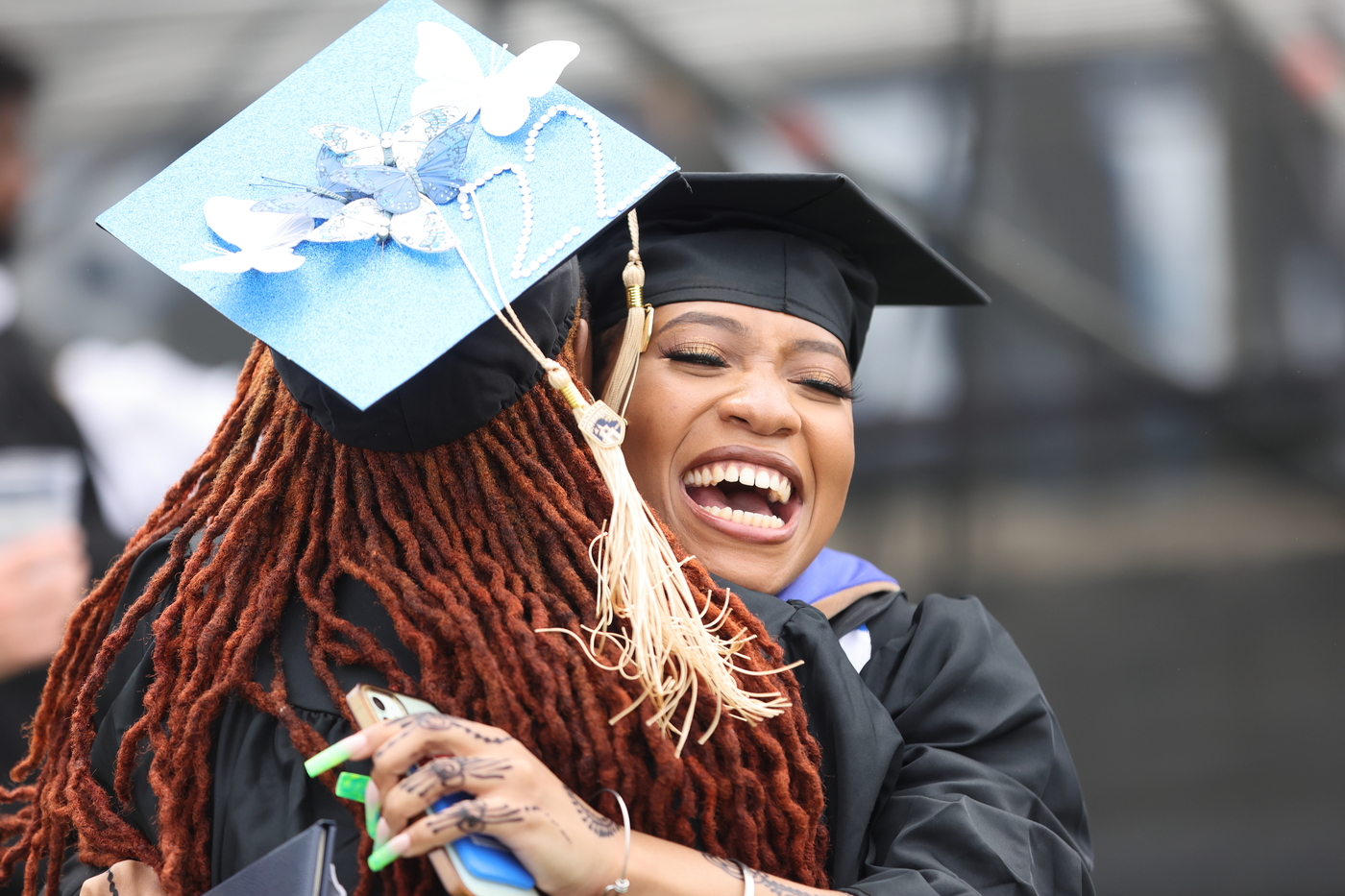 For over a hundred years, Bentley University has celebrated each new class of graduates as they head off into the world, but this year’s commencement ceremony — the first held on campus after a two-year hiatus due to the COVID-19 pandemic — felt especially electrifying. Students and parents embraced in celebration, friends posed for pictures with maskless faces, and faculty and trustees sat together — less than six feet apart — as graduates crossed the stage to sweeping cheers.

While celebrating together as a community felt new to many after the last couple of years, the commencement drew upon Bentley’s time-honored traditions and rich history. Faculty and students processed onto the football field to the sound of “Pomp and Circumstance,” a tune accented by the supportive cheers of family, friends, mentors and classmates. Large screens on either side of the stage showed videos, and students reacted happily as they spotted the familiar faces of classmates and friends. Congratulatory messages submitted via social media from friends and family across the world scrolled across the screen. “A milestone has been reached today,” one message said. “Never give up! Continue learning, trying, and accomplishing as you travel along.”

On a sunny and warm spring day, the university awarded undergraduate degrees to 1,154 students 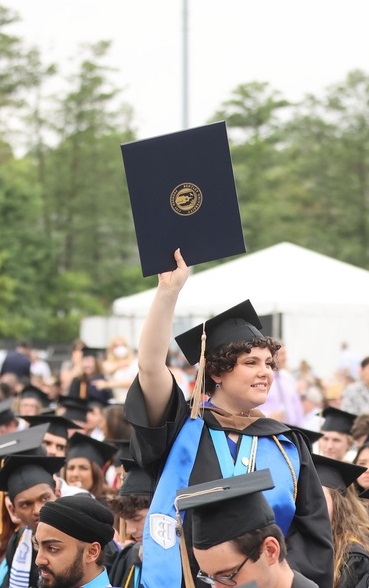 representing 36 states and territories and 36 countries. Approximately 8,000 people attended the university’s 103rd undergraduate commencement which was held on May 21, 2022, on the football field on South Campus. A livestream option was offered for loved ones near and far who were unable to attend in person.

E. LaBrent Chrite, in his first commencement since becoming president on June 1, 2021, greeted the crowd and commended the graduates for overcoming obstacles as they pursued their undergraduate degrees during the pandemic. “You have set new benchmarks for what can be expected from a Bentley student,” he said. “You were there for one another when times were tough ... I can think of no more deserving group to honor and celebrate in our first commencement back on campus than you, the Class of 2022. You should be proud of how you have succeeded in the face of so many challenges.”

‘Create Your Own Magic to Stir the Souls of Others’

Valerie Mosley, founder of the financial technology platform Upward Wealth and this year’s undergraduate commencement speaker, encouraged graduates to “become comprehensively wealthy” by finding what it is that “makes your spirit sing.”

“Like income, giving is so incredibly important, and you will feel so much better if what you do matters, not only to yourself but to others,” said Mosely, who created Upward Wealth to be an “emotionally intelligent” financial wellness benefit provider. Her company’s mission and career as an investor and adviser reflect Bentley’s commitment to using business for good. 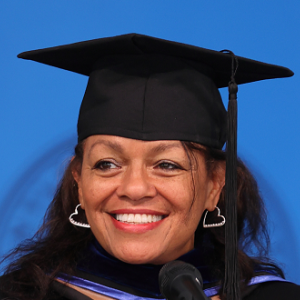 You aren’t what’s happened to you. You are what you believe you can be.
Valerie Mosley
Founder, Upward Wealth

Mosely acknowledged the toll that the stress of the pandemic had taken, especially on young people, and encouraged the students to be resilient and to know their worth. She spoke honestly about the self-doubt and abuse she had endured in her own life. “You aren’t what’s happened to you,” she said. “You are what you believe you can be, and what you repeatedly try and do.

“Disappointments are going to happen,” she told the students. “There is opportunity in adversity, and you have to be able to see it. When disappointment comes, what you see in the midst of that storm is magical, because that is where the returns are the greatest.”

Mosley, who “believes strongly that everyone deserves to be financially healthy,” received an honorary Doctor of Commercial Science degree.

While Mosely encouraged graduates to look to the future for inspiration, Senior Class Cabinet President Erin Buckmeier ’22 encouraged her classmates to learn from the experiences and relationships of the past four years. As she recalled fun memories the class had shared together — attending a Red Sox game, a boat cruise and even a senior class trip to the Bahamas — Buckmeier reminded the class of the close community they had built and how much they had grown in their four years as Falcons.

“We would not be standing here today without the support of the faculty and staff at Bentley and our personal support systems,” she said. “At the end of the day, we must also give ourselves credit for our resiliency and determination.” 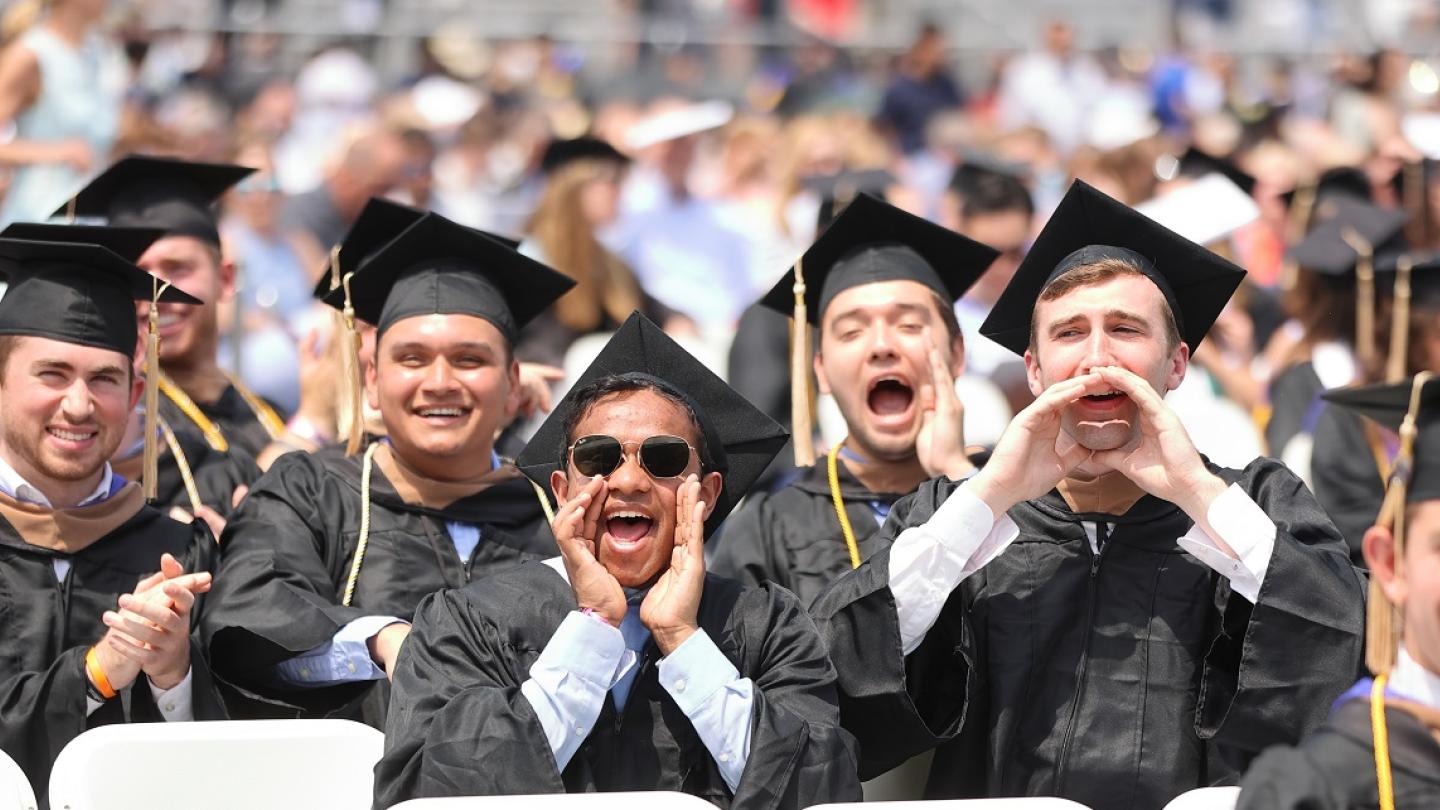 Graduates cheer as a classmate receives their diploma.

At the 47th annual commencement ceremony for Bentley’s McCallum Graduate School of Business later in the day, President Chrite addressed a crowd of more than 2,000 gathered inside the Bentley Arena, where the ceremony had been moved because of unseasonably warm temperatures. The university awarded 187 Master of Business Administration degrees and 339 Master of Science degrees in subjects including Accounting, Business Analytics, and Human Factors in Information Design. Degree recipients donned cassock-like gowns, and their satin-lined hoods in gold and Bentley blue bore velvet borders that reflected each recipient’s field of study. Four graduates were awarded a PhD in Accounting and three students received a PhD in Business.

Robert L. Reynolds, the president and chief executive officer of Putnam Investments, a global investment management firm, offered the graduate commencement address, beginning with an impassioned call for graduates to believe in themselves and their abilities while also benefiting from collaborative work environments. “Accomplishments driven by team collaboration and creativity will almost always triumph over the results of individuals working on their own,” he said. “Diversity brings powerful perspective to the table, so encourage and respect different points of view.”

Reynolds, who received an honorary Doctor of Commercial Science degree at the event, encouraged the graduates to embrace change. “Most of the industries that dominate the 21st-century economy barely existed a generation ago,” he said. “So, I would encourage you to relentlessly look forward. Look around the corner. The systemic changes coming in the next generation will make the changes we’ve seen in recent decades look like a warmup. Whatever you do, don’t stand still.” 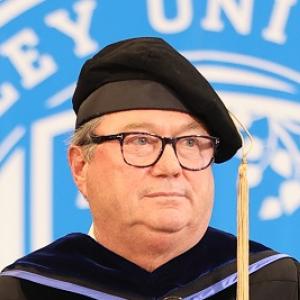 President of the Graduate Student Association Elizaveta Borisova MSMA ‘22 remembered the comfort that Bentley provided while taking classes from her home in Russia early in the pandemic, drinking coffee to stay awake for professors' office hours at 1 a.m. and student trivia nights at 3 a.m. Those connections to the Bentley community gave her a sense of belonging as her mental health suffered, she said.

“As graduate students, we are equipped not just to succeed in our careers, but to make a real difference with the help of our communities. Apart from new technical and social skills, it is the long-lasting friends and mentors we’ve gained at Bentley who will take us even further. It is the force of the Bentley community that we will cherish.”

Elizaveta Borisova: ‘The force of the Bentley community’

The Bentley University Class of 2022 includes 1,154 undergraduate students representing 36 states and territories and 36 countries and 550 graduate students representing 24 states and territories and 29 countries. Graduate degrees included 339 Master of Science degrees, 187 Master of Business Administration degrees and 24 certificates. Fifty-four students earned both their bachelor's and master's degrees this academic year. Four graduates were awarded a PhD in Accounting and three students received a PhD in Business. 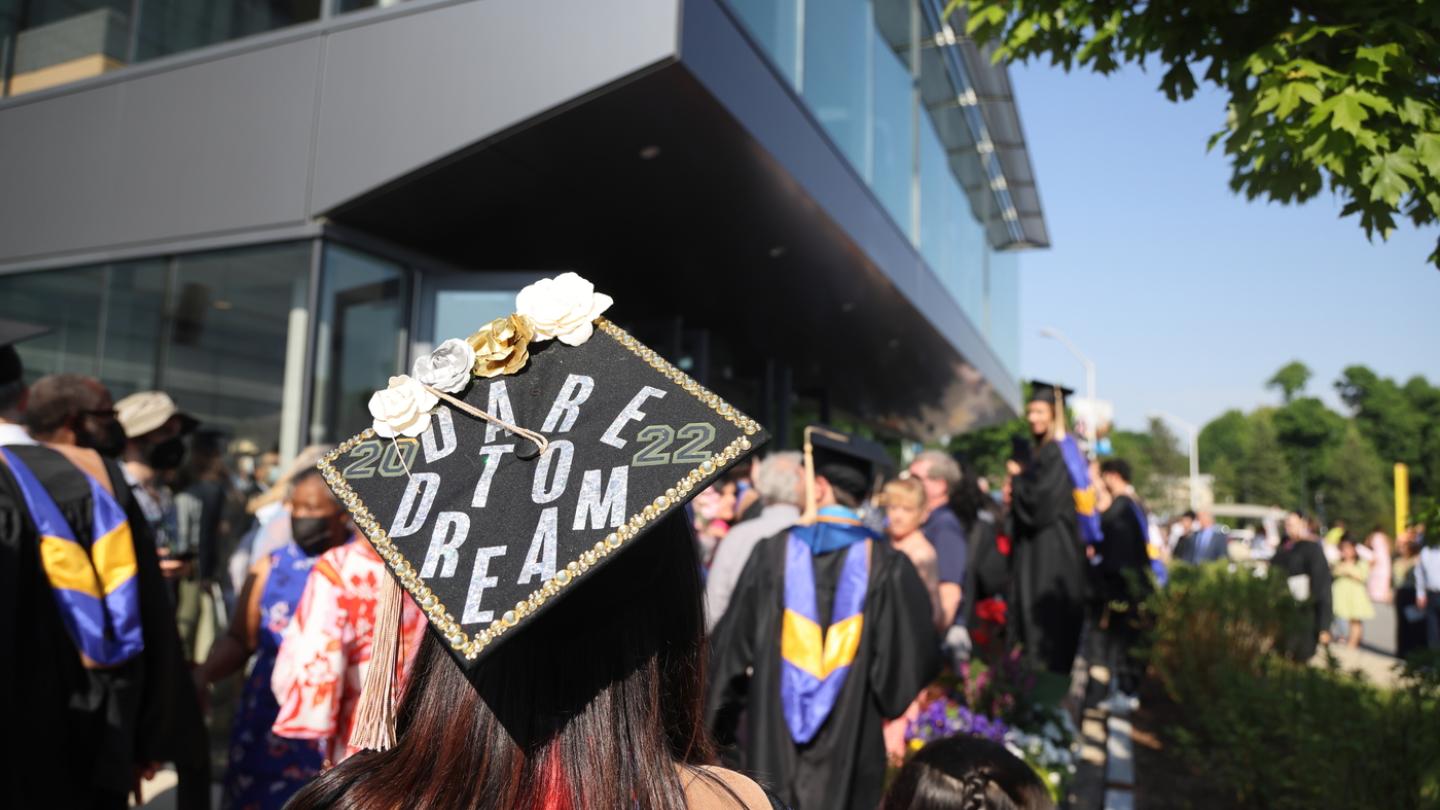 At the undergraduate commencement ceremony, Trustee Terry Carleton ’77 was honored with the Harry C. Bentley Alumni Achievement Award, which recognizes an alumnus who achieves excellence in their professional or local communities or the Bentley community. Carleton spent nearly two decades as an advertising executive at Hill Holiday before joining USB Financial Services. A 22-year veteran of the board of trustees, he served as chair of the board for seven years and acting university president for two years.