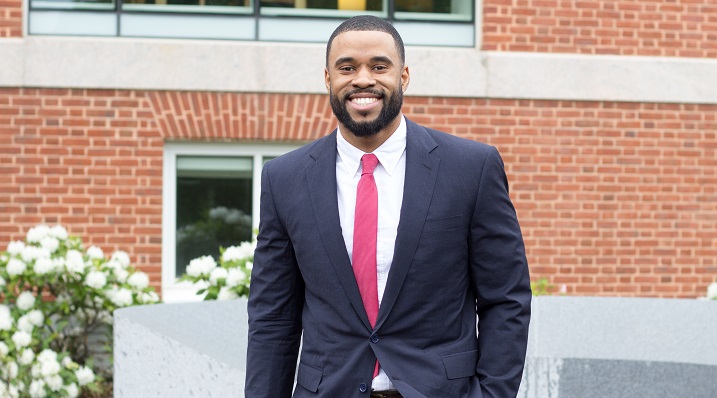 When professional basketball teams are looking for new players, time-tested statistics like points per game, rebounds and assists are certainly important. But picking out the next NBA star like Kyrie Irving or Jayson Tatum is more complicated than that, says Remy Cofield MBA ’14, a scout for the Boston Celtics.

“What we have now in the NBA are companies that give us information, which our analytics department can go through. They put together reports for coaches and players and for front-office staff who are looking at players they might want to acquire,” says Cofield. But the decision goes beyond analytics.

“Experience evaluating multiple players over the years and understanding what has been successful is just as important when coming to conclusions,” says Cofield, who estimates that 25 percent of scouting involves “talking to people, meeting new people, and getting information from people I’ve built relationships with over time.”

Cofield’s graduate degree prepared him well for a career as an NBA scout. He says his Bentley MBA taught him to use analytics effectively, to network successfully, and to become a leader. Cofield, who played basketball at the University of Pennsylvania, is also the general manager of the Maine Red Claws, the Celtics’ team in the NBA’s minor league, which is known as the G League.

As Red Claws GM, Cofield contributes across the organization. “There are people I talk with on a daily basis,” he says of colleagues in operations, on the coaching staff and the players themselves. “The Celtics’ front office is always involved in what the Red Claws are doing, given the potential to sign talented players from our team or others around the G League.”

Cofield spends much of his time watching games—sometimes in person and sometimes recorded—and sharing his evaluations of players with the Celtics staff. “I’m traveling to different places, watching film of college and minor G-League players, and communicating what I’ve seen and learned about certain NBA prospects,” he says.

Read About the Bentley Graduate Behind the Red Sox Mascot

The business side of the sports industry has become more inclusive, according to Cofield.

“There used to be this idea that you had to play a sport at the highest levels in order to understand and contribute to the front office or coaching staff,” he says, noting a rise in people with analytics or sports science expertise. “I believe that intelligent people, regardless of their background, can be impactful for a team.”

He credits the NBA for growing diversity with respect to ethnicity and gender. “When young adults see someone in a role they hope to hold someday, it’s motivating and inspires a feeling they can do the same.”

A version of this story first appeared in Bentley Magazine.