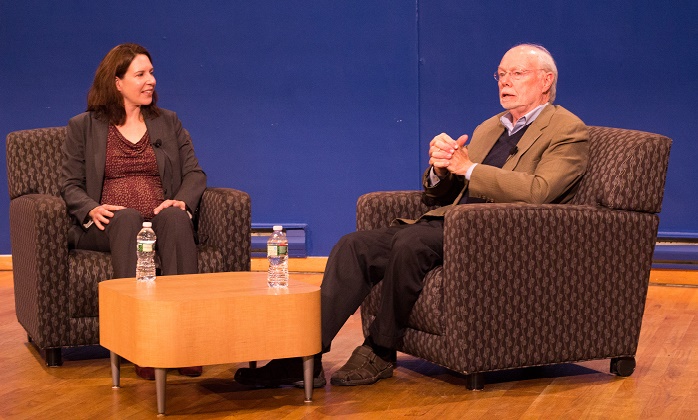 Why Business and Science Need Each Other

Biogen co-founder and molecular biologist Phillip Sharp on how it takes both to bring life-changing products to market
November 26, 2018

Faced with the decision to hire someone with strong science skills or strong business skills to lead a biotechnology company, Phillip Sharp would choose the latter.

“It’s really important that there are individuals who have a strong vision and a deep understanding of business, and relationships and management, to make a company successful.”

The observation may seem surprising coming from a Nobel Prize-winning scientist. But Sharp is committed to taking life-changing discoveries from the lab bench to the public square — his motivation for co-founding the biotech company Biogen in 1978. Sharp described his experience in a discussion led by Bentley researcher Sharotka Simon of the university’s Center for Integration of Science and Industry as part of the Innovator’s Business Speaker Series.

“Technology was society-changing, but it was all academic,” Sharp said. “To make something that was really going to change society, we had to move it into the private sector.”

Collaboration by science and industry is accepted practice today. Not so in the 1970s — as Biogen learned when shares dropped from an initial public offering price of $23 in 1984 to $4 per share at a low point. Sharp traced the problem to the company’s initial structure, which he said reflected a lack of understanding between the scientists and business people.

“The biotech field had developed in the absence of engagement with private sector activity,” he said. “Scientists didn’t trust the business side … and the company was highly focused on development of the science.”

Things changed when Biogen hired a CEO with a strong business background who sat alongside scientists in the board room — and listened to them.

“It said enormous things to the technical side of the company, and when it came to making decisions, he had the confidence of the scientists,” said Sharp. “Business leaders in the high-tech industry have to understand something about the technology and science. They don’t have to be in the weeds, but they have to know what the weeds are.”

More than 200 Bentley graduates have gone on to work for companies that Sharp has founded. These graduates work in areas such as accounting, finance, management and marketing. The group includes Lance Colwell ’92, a 14-year employee of Biogen whose most recent position at the company was vice president for the U.S. Rare Diseases Group.

Today, Biogen is a multinational, multibillion-dollar Fortune 100 company. But Sharp discussed how long it took to get there. One enormous challenge for early biotech companies was the length of time and investment required from research to product launch.

Noted Sharp: “Wall Street and society being willing to invest in companies that were not going to be profitable for 10 years was an integral part of why biotech existed.”

Bringing a product to market, he added, requires synergy. “Educating business leaders in the broad sector about the technology … and engaging the scientists developing the technology in business objectives — that is how you translate these ideas into being useful.”

A reception after Sharp’s presentation highlighted research by three Bentley professors: Elizabeth Brown (Law, Financial Planning and Taxation) on the legal implications of workplace wellness programs that effectively require employees to wear a FitBit, Apple Watch or similar health sensor; Ekaterina Cleary (Mathematical Sciences) on quantifying the contribution of the National Institutes of Health to recent drug approvals; and Chris Skipwith (Natural and Applied Sciences) on the genetics of opioid addiction.

The Innovator’s Business Series is sponsored by the university’s Center for the Integration of Science and Industry to foster better understanding of the path by which scientific discoveries are translated to create public value.

Watch a Video of Dr. Sharp’s Presentation, “From Basic Science to Biogen and Beyond"

Phillip A. Sharp, PhD, holds the highest rank of Institute Professor at the Massachusetts Institute of Technology. His research centers on the molecular biology of gene expression relevant to cancer and the mechanisms of RNA splicing. He earned the Nobel Prize in Physiology or Medicine in 1993 for landmark work that fundamentally changed scientists’ understanding of gene structure. Sharp is a co-founder of Biogen and Alnylam Pharmaceuticals.