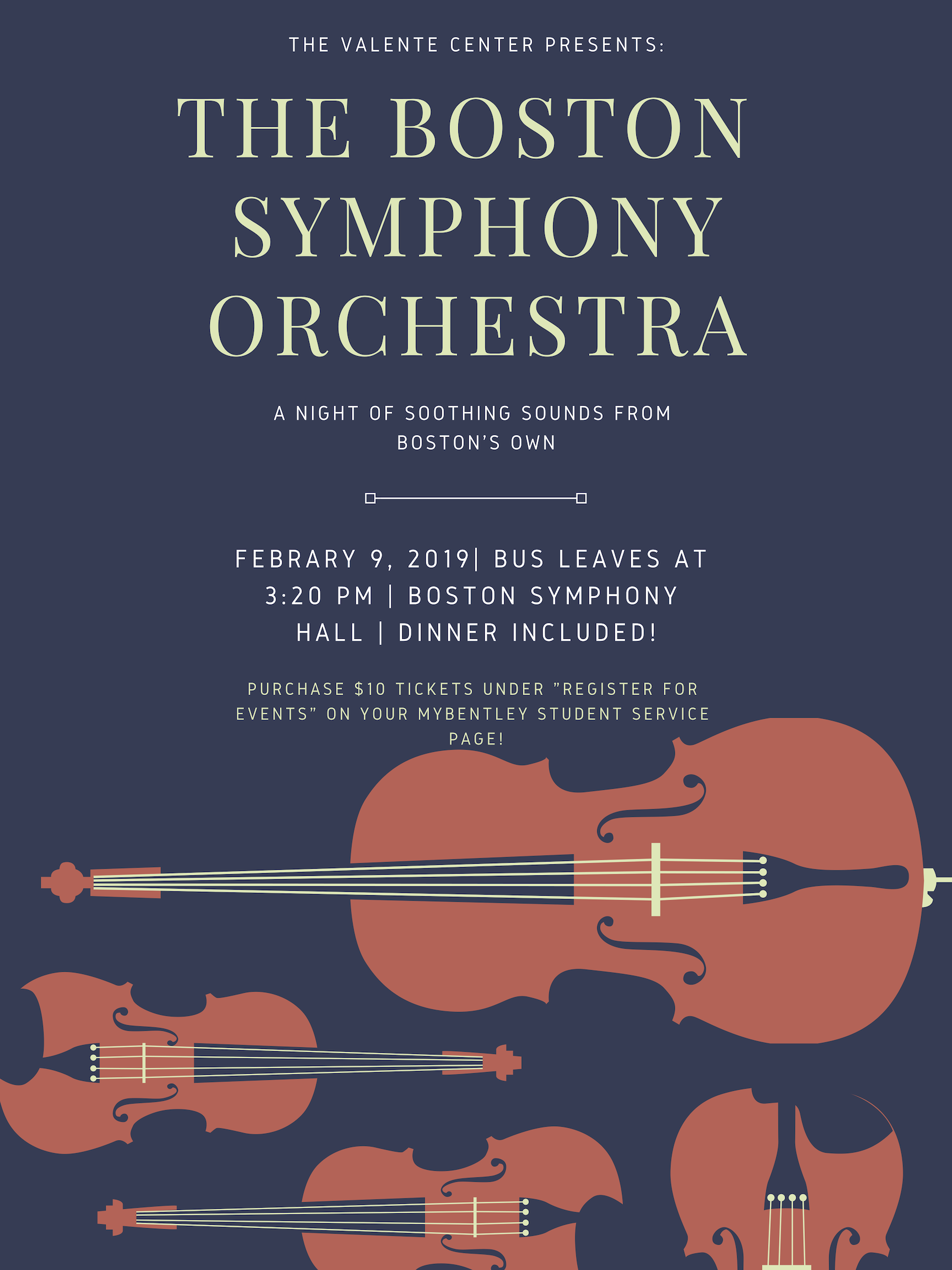 “The Valente Center seeks to sustain arts, humanities and sciences as an integrated part of life on our campus. Together with Student Affairs and the Bentley Chamber Orchestra, the Valente Center organizes an annual visit of Boston;s Symphony Hall, which includes a performance by the Boston Symphony Orchestra. Professor Aaron Nurick (Management and Psychology) offers students a comprehensive tour of the historic building, providing commentary on both the building and the many groups that perform in it before attending the concert. Students and faculty study and appreciate architecture and music together.

“Last year’s edition brought some 50 people from the Bentley community to the BSO. This year’s trip scheduled for Saturday, April 18 is now postponed. The Symphony Orchestra’s Music Director Andris Nelsons will conduct a variety of pieces by Bartók, Saint-Saëns, and Ravel.”

To accomplish its mission of maintaining the arts and sciences as an integral part of the Bentley community, the Valente Center collaborates with many different organizations and groups on campus. In partnership with the Residential Center, the center has coordinated several events to bring students off campus for opportunities to learn more about the Arts. In particular, the Valente Center has worked with the Arts Defined Community in Miller Hall and its residential director, Taylor Sprague, to take students living within that community on various trips, including on an outing to the Museum of Fine Arts in Boston. During that trip, students were given a guided tour of two exhibits: “Women Take the Floor” and “Read My Lips.”

Women Take the Floor: “Women Takes the Floor challenges the dominant history of 20th-century American art by focusing on the overlooked and underrepresented work and stories of women artists. This reinstallation — or ’takeover” — of Level 3 of the Art of the Americas Wing advocates for diversity, inclusion, and gender equity in museums, the art world, and beyond. With more than 200 works drawn primarily from the MFA’s collection, the exhibition is organized into seven thematic galleries. Interactive programming creates a dynamic space that welcomes visitor participation, and new rotations of artwork introduced over the run of the exhibition ensure that new voices and perspectives are available on each return visit.”

Read My Lips: “The four videos installed in the Krupp Gallery consider the female voice — where it’s accepted and how it’s suppressed; its treatment as simultaneously alluring and repulsive; and its relationship to the body. Works by Patty Chang and Marilyn Minter subvert idealized images of women by introducing an element of the grotesque. In Hand to Mouth (2000), Chang parodies the superficial roles women occupy in fetish films, while Minter’s Green Pink Caviar (2009) features an artfully made-up mouth lapping and regurgitating green slime in slow motion — blurring the line between desire and disgust.

“Other works give visual form to the sound of a woman’s voice. VALIE EXPORT goes to the literal source of speech in i turn over the pictures of my voice in my head (2009), training a medical endoscopy camera on her own larynx while she recites a poem. In Fingernails on a blackboard: Bella (2014), Sharon Hayes displays a conversation between a vocal coach and former U.S. congresswomen Bella Abzug as white text on a blue screen. The dialogue shows the stentorian Abzug practicing a number of absurd vocal exercises in order to achieve a softer tone.”

After this tour, students were granted free time to explore the rest of the museum and ask staff about various other exhibits. Because of the shared efforts of the Arts Defined Community and the Valente Center for the Arts and Sciences, students were offered an enriching experience to view the connections between art and other disciplines.