When Myriam Imessaoudene ’21 arrived on the Bentley campus four years ago, she was looking for two things that were crucial in her life to that point: faith and family.

She soon found both and, in the process, launched a college career filled with advocacy and leadership. Along the way, Imessaoudene used her voice to help others find the feeling of community she sees as instrumental to the Bentley experience.

The daughter of Algerian immigrants, Imessaoudene grew up in a New Jersey suburb of New York City. She hadn’t heard of Bentley until a friend mentioned it in study hall as a school she was considering.

“One of my best friends was telling me about the schools she was interested in and she mentioned Bentley,” Imessaoudene remembers. “She said it was a business school and I knew I wanted to go into business so I thought, ‘You know what? Why don’t I apply?’”

Although the friend ended up not applying, Imessaoudene did, and decided to accept before even seeing campus.

“If it wasn’t for that random study hall,” she says, “I never would’ve discovered this place.”

I knew that I had to speak up. What justice would I do to my friends, family and my organization if I didn’t?
Myriam Imessaoudene ’21 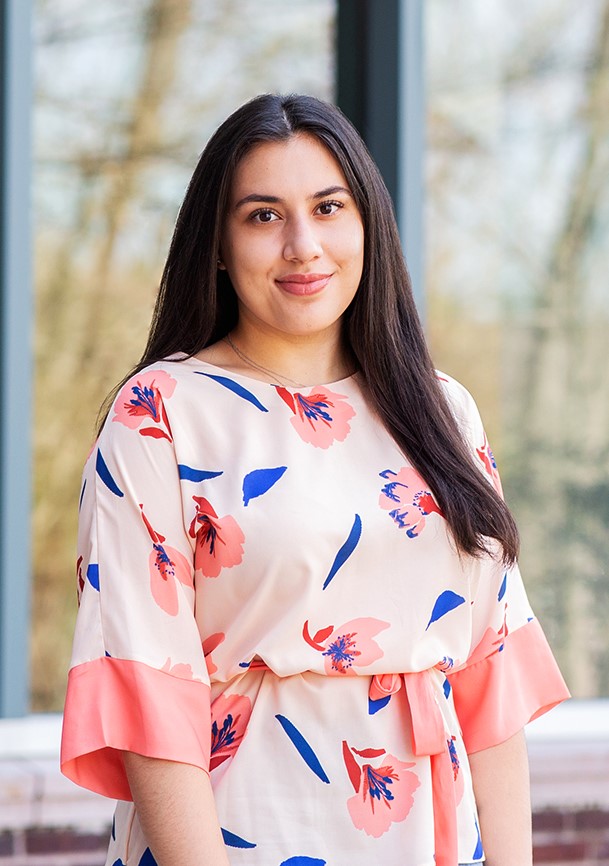 Imessaoudene took advantage of the Multicultural Center (MCC)’s MOSAIC pre-Orientation program for students of color to move on to campus early.

“I never felt that anxious rush of being away from home, even though this was the first time I had been away from my parents,” she says. “I just felt very at peace and at home. I think that’s the best you can ask for as a college freshman.”

Still, she knew she wanted to keep in touch with her heritage, so Imessaoudene sought out support groups to do just that, and soon joined up with the Bentley Islamic Community and Africana Student Association (ASA).

“I’m very in tune with my culture and my religion,” she says, “so finding people who were like me, at least in terms of sharing similar values, was very important.”

As an advocacy group, ASA plans events based around embracing and sharing African culture, while at the same time educating the campus about the larger African experience. Activities range from movie nights and how-to clinics on things like African headwraps to a formal spring gala that draws more than 400 people.

Imessaoudene quickly rose through the ASA leadership ranks. She was elected president in spring 2020, just as COVID-19 was shutting down campus and a national reckoning was bringing the struggle for racial justice to the forefront.

“Part of me thought, ‘This is happening,’ even though it was a very difficult conversation,” she says. “I realized I had more responsibilities as president than just organizing events. It’s not all fun and games. There’s a serious factor to it. This is a part of who we are. We have to speak up and fight for what we believe in.

“Being white-passing, I had to acknowledge that my privilege sheltered me from the experiences my peers faced,” Imessaoudene adds. “I knew that I had to speak up. What justice would I do to my friends, family and my organization if I didn’t?”

Bentley’s newly formed Racial Justice Task Force asked Imessaoudene to join. Together, they led a campus-wide discussion and discovery process aimed at putting Bentley on the path to racial justice and equity.

“I really do think that Bentley is making a step in the right direction,” she says. “Just the fact that they’re having these conversations and they’re making initiatives to better Bentley’s campus is a positive thing. It’s a good start.”

‘I FOUND THE RIGHT PEOPLE’

Looking back, Imessaoudene knows finding a community through her extracurricular work was the key to her happiness at Bentley.

“I feel like putting myself out there and joining these organizations and meeting people, and really stepping out of my comfort zone, that’s what made me love Bentley so much,” she says. “I knew the education was going to be good. But classes are temporary, they’re only a semester. The people are going to be there for four years and beyond.”

A Corporate Finance and Accounting major, Imessaoudene plans to parlay an internship with EY into a career in accounting. In the meantime, she’s thinking of ways to keep her new family together after graduation, as they spread out over the country, and the world.

“Coming to college, you want to find a place where you can really be yourself,” she says. “I think I’ve been able to do so, mostly because I found the right people. I’ve had the most amazing time with the most amazing people. I found my family.”