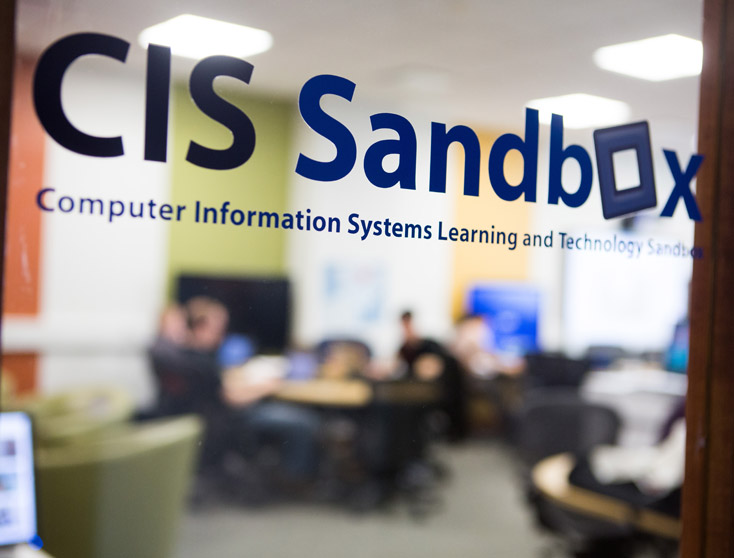 How to Succeed in Tech: Advice from the Pros

Research on millennials, conducted by Bentley University and others, consistently indicates that more mentoring, hands-on opportunities for learning, and a comprehensive grasp of technology are all initiatives that can benefit millennial career preparation while in college.

When all three come together, as they have recently at Bentley, it presents an unusual opportunity for students to gain insights into how to enhance their career success.

Bentley alumni such as Colby Dayton ’09 are the key. Dayton had just begun his senior year at Bentley when he lined up a job with the IT group at KPMG — a multi-billion corporation that’s one of the Big Four accounting firms.

“That’s correct,” says Dayton understatedly. “Things have worked out very well for me since Bentley.”

Today, a little more than five years after he graduated and started working, Dayton is on campus again — giving his job experience back to the university, as it were. Ready with a quick recipe for current students to shape their own career paths, Dayton is set up outside of the CIS Learning and Technology Sandbox, with a few of his KMPG colleagues, waiting to talk to the 20 or so students who have come to toss questions at him. The big answer they are looking for, the one Dayton will work hardest to provide, has to do with how he found success; how this New England native accomplished what he did —  before he even got his diploma.

Dayton’s September 11 trip to campus was part of a special series of alumni visits planned by the CIS Sandbox and Bentley’s Center for Career Services. The visits bring together Bentley alums working in technology with current, tech-minded undergraduates and graduate students hoping to break into the field. The sessions represent but one example of the highly valued career tools and special services that are available to Bentley’s undergraduates and graduate students at any regular hour of the day or online anytime.

Coupled with the rich resources and staff of Bentley’s nationally ranked Center for Career Services, these informal meetings with alums offer current students a leg up on finding work in their chosen field. And there are frequently other career-related events happening on campus. Even as Dayton was chatting downstairs in the Academic Technology Center, for example, representatives from a major Boston-based business consulting firm were one flight up at an information table, talking to students about careers.

Prospective employers like these have been visiting campus for some time, and recruitment has been surging. But, according to the organizers of the CIS Sandbox talks, the chance for students to meet and learn from alumni working in technology represents a new tool for planning for life after Bentley.

"I wanted a way to involve our best students in the CIS Sandbox community, which meant we needed to do more than offer homework help and Internet access,” says Mark Frydenberg, a senior lecturer in the Department of Computer Information Systems and director of the CIS Sandbox. “Every student wants a job when they graduate. By inviting alumni back to the CIS Sandbox to talk about their careers and the technologies they are using, we strengthen relationships with alumni, and create a link between what students learn in the CIS Sandbox, and how their potential future employers value their knowledge and abilities.”

Janet Ehl, the Center for Career Services’ director of Recruiting and Employee Relations, agrees with Frydenberg. “This is real-world advice from industry insiders who took the same classes and did internships, and who can offer insight on best practices to develop job search strategies,” she said. Ehl collaborated on the Sandbox Career Tech Talks series and is her office’s primary career adviser for CIS students.

Judging from the students’ enthusiasm, the alumni visits seem to be working — creating a sense of optimism and opportunity. By talking to Dayton for just a few minutes, several students were able to fashion an early strategy bullet-list whose success revolves at least in part around immersion in the employment-related events on campus.

Dayton’s message to the students is direct and straightforward: “I tell them that I have been where they are, generally speaking.” Then he lays out a short scenario that could be titled, “This is how I got where I am and you can do it, too.”

Shi Yin of China and her friends, Zhe Li and Silei Peng, said they came to the CIS Sandbox session to get advice from Dayton. “We can imagine that this is where we will be in the future,” says Yin, who is in her second year of the masters of information technology program. Peng, a first-year MSIT student, had just finished speaking to Dayton. “I got a real clear picture of what the job is,” she said. Li said her friends at other Boston-area schools tell her that Bentley’s Career Services offerings and programs like the CIS Sandbox-Alum talks far surpass those at other campuses.

Dayton’s road to becoming a consultant in IT Attestation at KPMG began with a connection through his then–future sister-in-law. In the summer while still at Bentley, he paid monthly visits to the firm’s corporate offices to learn about any employment opportunities there. And between his junior and senior years, he did a summer internship. Then his job offer came.

Before any of that, Dayton said he was often out at campus job-related events and talks, or tapping into resources available in Career Services. “You need to be active on campus as much as possible,” he says. “That’s the biggest thing, really. And, just go to events like these.”

The opportunities to find meetings and network are plentiful for IT students. Following the KPMG visit, as part of the CIS Sandbox series, four Bentley alums working with the multinational firm EY visited campus to talk about career opportunities in IT Advisory. Other companies participating in the CIS Sandbox talks for fall 2014 include Liberty Mutual, Deloitte Consulting, and Philo, a local Internet TV start-up based in Cambridge.

Dayton, who majored in Information Systems Audit and Control and earned his masters of accounting from Bentley in 2010, recommends that students speak face-to-face with company representatives, ask a lot of questions about their job responsibilities and work environments, and inquire about internships — still the real key to getting a full-time position.

Like Dayton, Alexandra Prezioso ’15 interned with KPMG and is starting full time there after she graduates from Bentley in May. A CIS major, she helps KPMG recruiters with campus visits like the recent trip to the CIS Sandbox. Preziozo applied for her job through listings posted on BentleyLink by Career Services, and could not attend employment events on campus because she was abroad. But she says she recently has recognized how personal contact with alums can make a difference.

“I think the advice students get is really important because most people can relate better to people who have gone through similar circumstances and challenges,” she says.

Dennis Nealon is a communications specialist at Bentley University.