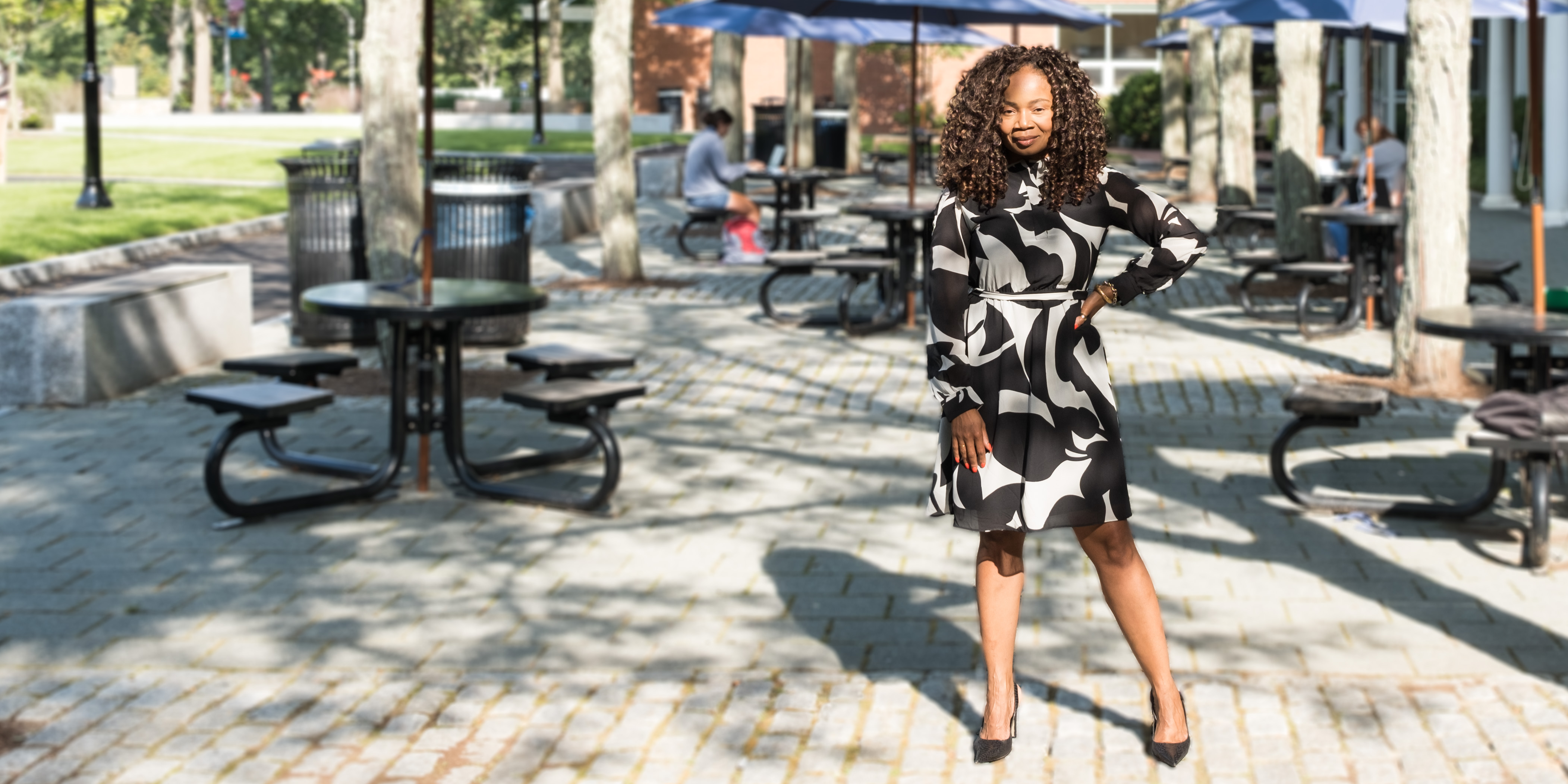 Before she could reinvent her career, Guilda Hilaire ’00 had to find her voice.

Like many women, especially women of color, Hilaire found herself frustrated early on in her professional life in digital marketing.

“I was working at this organization and there was this notion that the male developers’ and architects’ voices were always louder than ours,” she remembers. “I felt like something had to be done. I had to come to the realization that I was just as good as they are, just as smart as they are. So I started to use my voice to articulate my knowledge: writing LinkedIn posts, becoming a community group leader for Salesforce.

Hilaire has earned a lot since then. The 2000 Management major returned to Bentley in 2015 to take part in the Gloria Cordes Larson Center for Women and Business’ Women’s Executive Leadership Program. She’s also a member of the Bentley Global Alumni Board and active in the university’s DEI (diversity, equity and inclusion) and recruiting efforts, while also serving as director of product marketing at Salesforce.

Sitting outside on campus recently, Hilaire talked about how the school continues to impress her.

“Even 21 years ago Bentley was always inviting,” she says. “It was big enough, but I never felt smothered by the buildings and the people. And it was small enough where I could make friends, get to know the professors, feel safe. Academically, I wanted to be in business, so it had all the classes that I wanted to take. For me, it was just perfect. Looking at the campus now, all the changes, everything is completely modernized. It really has that university feel.”

Take a chance. If it works, it works. If it doesn’t, it doesn’t. But you’ll never know unless you try.
Guilda Hilaire '00

Hilaire isn’t shy about calling out failure to address inequality, whether it’s in the business world or in higher education.

“I can’t tell you how many times I’ve seen corporate top-10 lists where there’s not one African-American person on them,” she says. “I have written to the writers and said, ‘Surely there is somebody of color, a minority, somebody from an underrepresented group that could be part of this list. You just didn’t do your homework.’

She says Bentley’s new president, Brent Chrite, and the school’s development of a diversity and inclusion curriculum are big steps in the right direction.

“It’s all about the programs that you’re building up,” says Hilaire. “I can honestly say to a student, ‘I am seeing changes happening that would make me want to come back to this campus as a student.’ I have a 17-year-old daughter, I would love to see her come here, based on where things are heading.”

Still, Hilaire insists the school needs to make sure that its commitment to DEI is sincere and comprehensive. She says her alumni group is constantly doing pulse checks to see what efforts are working, and which ones need work.

“It’s not just slapping a minority in a brochure and saying now we’re diverse. It’s constantly serving our communities,” says Hilaire. “For classes with fewer minorities, we need to ask ourselves, ‘Are we not telling our underrepresented groups about these classes?’ You have to figure out ways to slice the data and look at it differently to ensure there’s balance across all the classes. Where do we see a gap?”

FIGURING OUT HOW TO HELP

Growing up, Hilaire always wanted a mentor. Not someone who just wanted the title, or filler for a résumé, but someone who really cared. As a single mother, she further saw how crucial strong role models were for young Black women. As her alumni relationship with Bentley deepened, she finally saw the chance to fill that gap in her own way.

After speaking at an orientation event, Hilaire was approached by some students who asked if they could keep in touch. She offered them something more.

“I wasn’t asked to be a mentor. I asked to be their mentor,” she says. “I just did it. I’m one of those people who sees a problem and figures out a way to help.”

The group has since grown to eight, five of whom have graduated. She’s in nearly constant contact, whether it’s a phone call, text, or dinner.

“I love doing it,” says Hilaire. “I love giving back to the Bentley community. I love being able to give advice and open their eyes to different things. I love uplifting and supporting them and their initiatives. 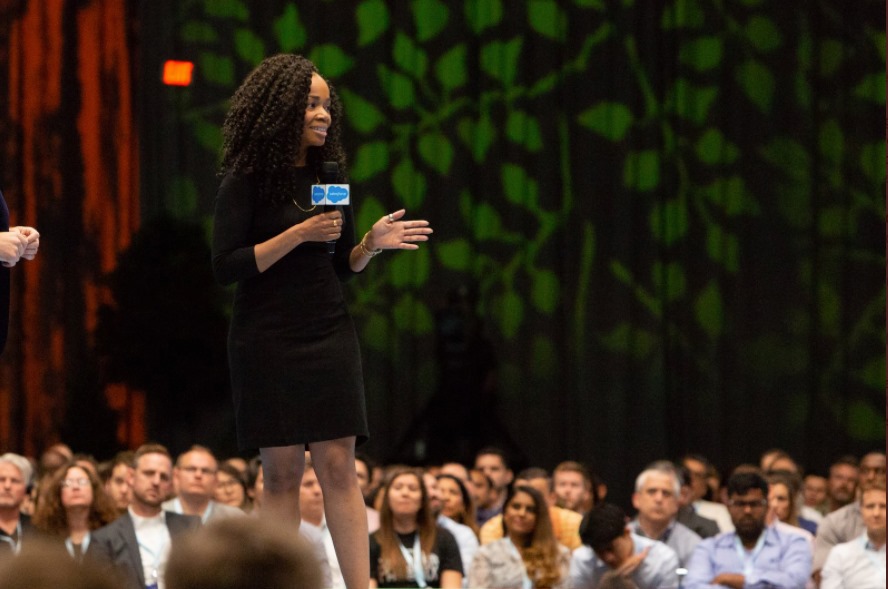 “As alums, we have to do it. If we don’t do it, who else will? Who else is going to be their cheerleader, their advocate? They’re building their brand. I’ve built mine. They need somebody who is going to cheer them on, rave about all the incredible things they’re doing, and encourage them.

Shortly before Bentley’s spring commencement, Hilaire asked her graduating mentees if they had met the school’s new president. They hadn’t, she was told, but were waiting for the administration to set something up.

“I said, ‘Why? You’re graduating this Saturday. They announced the new president weeks ago. Why haven’t you met him? I’m challenging you to reach out to him and introduce yourself.’”

The students emailed President Chrite and he responded later that day. They eventually connected virtually to talk about their experience at Bentley and his hope for the future.

“They said, ‘Guilda, if it weren’t for you, we never would’ve thought to do this,’” says Hilaire. “Take a chance. If it works, it works. If it doesn’t, it doesn’t. But you’ll never know unless you try. That’s exactly what I’ve done with my brand: Taking a chance with myself. I’ve always challenged myself, put myself out there, and raised my hand to do something nobody else would.”