The Next Big Thing

As a UX professional I have recently been on a quest to understand blockchain better and see what impact if any it will have for people in context of using technology.  Much has been written about blockchain technology and how it is the next “big thing” for business and technology.  Most notably blockchain is usually mentioned in the context of the digital currency (also called cryptocurrency) Bitcoin.  Initially my questions revolved around the impact of blockchain and user experience.  In this blog post I will share what I have learned and why I think we should care about blockchain.

If you Google blockchain you will undoubtedly come up in many interesting articles, papers, blogs either defining the term and/or informing you that it will have a big impact on how businesses are run and services are delivered.

It may be simplest to think of blockchain as a different way to recording transactions between two parties. Another way to think about blockchain is different kind of database. Bitcoin is the most popular example of blockchain that is discussed on the Internet. Bitcoin is a digital-only currency that uses blockchain to record transactions (buying and selling the currency) between two parties. I don’t believe Bitcoin has much relevancy to UX because there is no User Interface to Bitcoin – everything is under the hood - much of what is discussed in the nuts and bolts of how the backend technologies deal with the currency. However, there are some other examples of potential applications for blockchain that could be interesting for our profession. These include electronic voting, electronic medical records, contracts, and business supply chains. It is in these non-Bitcoin examples of blockchain where UX professionals may be able to contribute to the overall experience.

DIFFERENCES BETWEEN BLOCKCHAIN AND CURRENT APPROACHES

Currently when we interact with data, it is stored in a central location. This could be a database on your computer, a server hosted by the organization that is managing the transactions, or in the cloud (e.g., Google Docs).

As seen in table 1 below, blockchain is different because of key attributes such as data storage, control, and security. The data that represents each transaction is not stored in one central place.  All transactions are stored across a decentralized network. Each transaction is stored in a node or a block. All the blocks are chained together, hence the name blockchain. A distributed ledger is another analogy that used to describe blockchain. Another critical aspect of a blockchain is control. Unlike databases today there is no one organization that controls access to the data and approves each transaction.

Security is also a key attribute within the blockchain. The blockchain is replicated across the network so there is no single point of failure. Transactions must be validated by the entire network. This is done through complex algorithms (which I won’t get into here). Furthermore, cryptography (private keys) is used to ensure transactions once on the blockchain cannot be reversed.

The supporters of blockchain claim that it will increase efficiencies within processes and reduce costs since the central authority is removed from the equation. We’ll see if this prediction comes true.   Figure 1 show an overview from Standard and Charter Bank of two people using a blockchain for a transaction and the six steps that are involved. 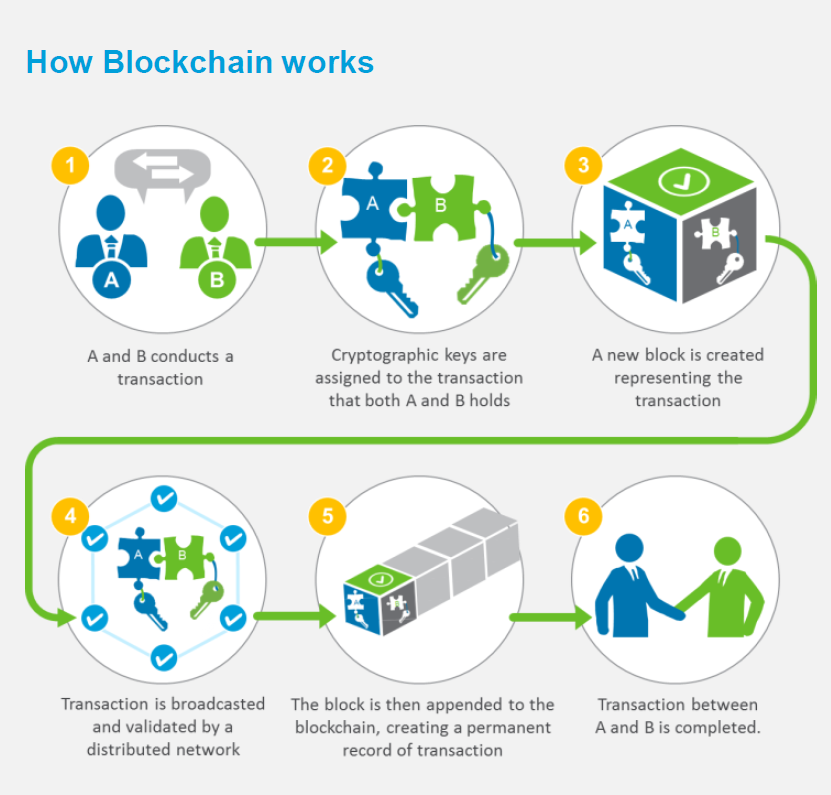 Figure 1: Example of How Blockchain Works

The six steps in this example blockchain transaction are:

You may be wondering, this is all very interesting, but so how will this affect people or my users?  According to the experts, at the heart of blockchain is a better way to facilitate a transaction.  With any transaction there are usually at least two parties involved. Each party could be an organization at the very end of the flow there will probably be a human. In the case of Bitcoin it is two person buying or selling using this currency. In other cases such as a global business supply chain, the blockchain transaction represents a more complex process or service where many people and organizations are involved.

Typically when we think of a service we are thinking more than just the user interface or computer that someone has to interact with. According the Nielsen Norman Group:

Service design is the activity of planning and organizing a business’s resources (people, props, and processes) in order to (1) directly improve the employee’s experience, and (2) indirectly, the customer’s experience.

While the user experience is still critical, the overall experience of the end-to-end process must also be designed well for success. This is why service design has important role to play for blockchain.  If the most elegant technical solution for blockchain is implemented, but the service that humans have to deal with is poor it really won’t mater. Typically with blockchain technology, the users involved with the transaction are in different locations.  Also, with complex services and process the users are also spread out in different locations. They also could have very different roles and interacting with the service at different times, however their actions are very much co-dependent.

A great example how blockchain can improve the design of a service or end-to-end experience is a pilot project conducted by the British company Provenance.  Provenance has created a platform for making business supply chains more efficient and transparent.  By using blockchain technology they were able to improve the overall service of the supply of tuna from the sea to the table, and the many points in-between.  When you go to the supermarket or a restaurant as the end user of tuna or any food, you probably don’t know or even think about all the people (or “middle users”) that had a role to play in order for you to have a nice meal.

The use of the blockchain and mobile technology improved the traceability and transparency for many users in the overall service journey - ensuring fisherman received fair treatment and a fair price and consumers were easily able to find out where the fish came from and its history.

At the start of the process, fishermen were able to record their catch on the blockchain by sending a text message from their mobile phone.  This transaction was the start of the supply chain that was also updated at each stage (fish processing, wholesale, and retail, etc.) by using other technology such as RFID (Radio Frequency Identification). 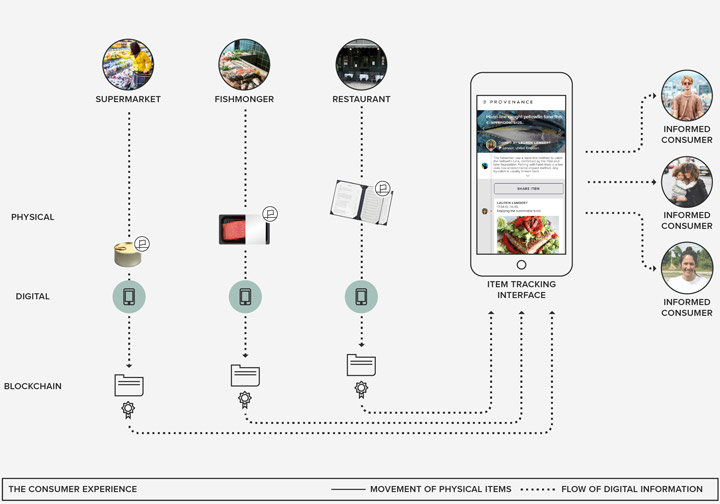 Figure 2 shows the journey from the supermarket, fishmonger (fish market), or restaurant to the consumer. Using the blockchain, consumers have a way to trace the history of the food on the shelves by scanning special stickers with their mobile phones using an Item tracking interface.  These stickers are tied into the blockchain ensuring traceability all the way back to the sea. According to Provenance, in the UK, 30% of shoppers are concerned about the where their food came from including the quality of the food and ensuring it was sourced following all environmental standards.

I have come to the conclusion that the impact on UX (screen or device) will be minimal, but the impact on overall service design (end-to-end experience) could be very large - not just for the end users or customers but for everyone involved with the business or service.

As we have seen with user experiences on screens people really don’t care about how good the implementation (software code) is. Obviously it has to work without bugs, but that is not good enough.  Just as with the user Interface, the service design must be usable for all involved.  What does a usable service design using blockchain look like?

Customers and people need to trump technical needs. Of course since we are dealing with complex services that may have many touch points that are behind the scenes and/or at different stages within the entire process, they all need to be taken into account and analyzed.  This is where good user research such as contextual inquiry will be critical.

One of the buzzwords around blockchain is “trustless”. This means that since the service is decentralized there is no need to trust a central authority and trust or consensus is built in to the algorithms that runs the blockchain.  Let’s assume this is the case, however as I have seen with many people using systems especially when money or important decisions are on the line, if trust is not part of the new experience the user will certainly lose confidence fast and stick with what they know. Therefore, since the old model of a trusted central authority is being disrupted, extra care must be taken to ensure that trust is designed into any human interaction of the service using blockchain.

As I mentioned many people may be involved and while we need to pay attend to the customers and/or end users there may be middle users that have an important role to play in successful delivery of the service.  While each touchpoint in the overall service is key, how they all come together needs to be looked at from a top-down or holistic standpoint.

While many experts are excited about blockchain, the people needing to the service should not care about what is going on under the hood unless it add some value

Like with many new technology innovations, blockchain feels like it is looking for applications and services that it can make better.  We must be careful not to let the tail wag the dog.  As with a good user interface where design must drive the underlying technology with, blockchain projects, the service design must be the foundation and driver for everything else including how the blockchain is integrated into the overall experience for everyone wherever they are in the chain.

Peter McNally is a Senior UX Consultant at the User Experience Center. Regardless of the area or technology, Pete always focuses on the human at the end of the product, so they can have the most seamless and engaging experience. He has worked with users and designed digital experiences in the financial services, healthcare, government, education, energy, manufacturing, defense, and electronics industries.

Prior to joining the center, Pete was a Principal Consultant in the CSC User Experience Practice, Senior User Experience Architect at HP Enterprise Services, Research Officer at University of Hertfordshire in the UK, and Senior Software Engineer at 3M Health Information Systems. Pete holds a Bachelor of Science in Computer Science from Northeastern University and a Master of Science in Computer Science from Rensselaer Polytechnic Institute (RPI). He is a member of the International User Experience Professionals' Association (UXPA), Boston UXPA, Boston CHI and International Association of Accessibility Professionals (IAAP).