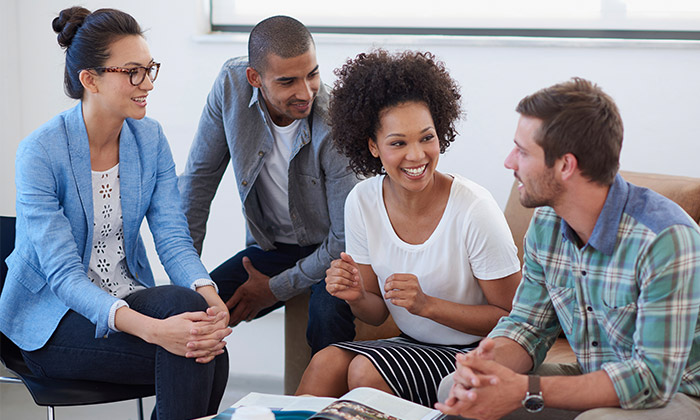 7 Ways to Promote Diversity in the Workplace

Big names like Google, Facebook and Twitter have openly admitted a lack of workforce diversity -- and their intent to ramp up recruitment efforts and change the landscape of Silicon Valley. But what happens once the hiring is over? Will the company culture prove inclusive enough to make people want to stay?

Tough questions like these challenge a generation that insists there are no differences when it comes to various groups, says Bentley University professor Donna Maria Blancero, coordinator of the course Human Behavior and Organizations. “They’re very different from baby boomers in regard to the number of minorities they’ve been exposed to, but the inclusion piece is the same. We still have people self-segregating and they don’t even realize that they’re making assumptions or avoiding people.”

Professor Marcus Stewart agrees. “The problem is, companies hire for diversity but then have a culture that rewards and promotes conformity.”

Companies hire for #diversity but then have a culture that rewards/promotes #conformity, says prof.

Stewart, who teaches the course, strives to create a classroom culture that defies that. Students are placed on diverse teams for cases and situations where people are different in all kinds of ways: generation, countries, majors, colleges.

“It’s not easy to work with people when you don’t understand where they’re coming from,” he says. “But if your goal is to truly accomplish the task at hand, you will learn that each person has something useful to contribute.”

Blancero’s research on isolation with the National Society of Hispanic MBAs uncovered lots of excitement about hiring people of color, including strong recruitment efforts and salaries; but that’s just the beginning. “Once people got to work, they felt pretty isolated. The word gets out, and the company suffers because minorities avoid applying.”

Here are seven strategies to avoid this kind of fallout:

Given the dual attitude theory, his goal for students is to raise awareness of implicit attitudes, learn how to build mechanisms to compensate and explore the value of a diverse workplace. He falls back on the classic Christmas story of Rudolph the Red-Nosed Reindeer to raise pertinent questions:

Rudolph was ostracized, marginalized and excluded because his bright, red nose was something the other reindeer had never seen before. Then there’s this one night and an amazing storm with the worst of conditions when Santa realizes that Rudolph has something different that’s valuable.

If you were Rudolph -- excluded from all training and having never been in the reins -- would you accept the job? And, if you did, could you possibly be prepared to succeed?